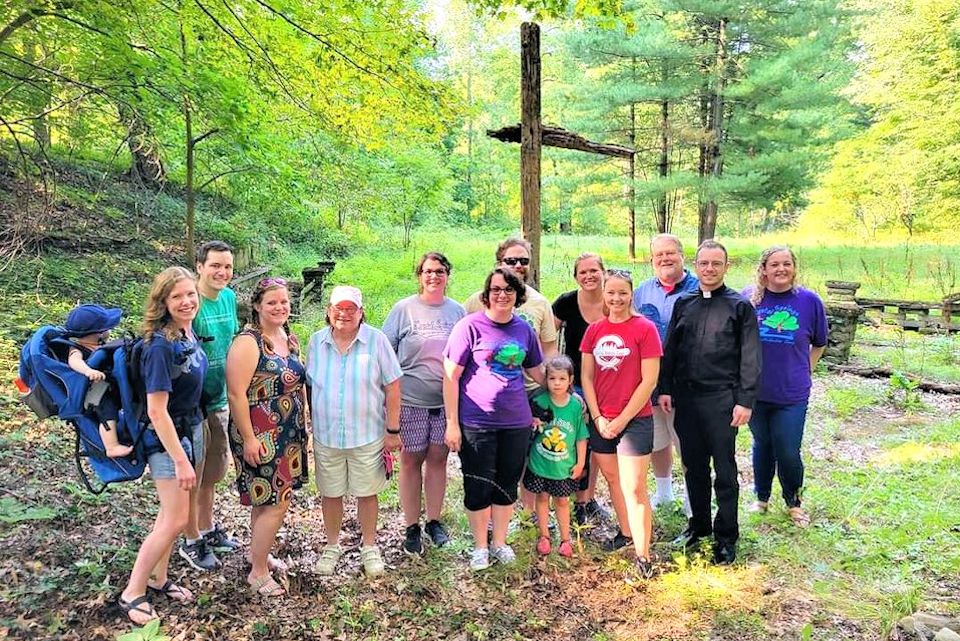 "We are just passing through." Deacon Mark Einselen (second from right) with others who served on the staff of Crystal Springs Camp 2007-2011. Standing behind Mark is Jeff Parsons, who was camp director during that time. Parsons now is the Executive Director of Bay Shore Camp and Einselen is a Deacon of Anglican Church of the Ascension in Indianapolis, Indiana. ~ photo courtesy Cindy Parsons

Mark Einselen served on the staff at Crystal Springs Camp from 2007-2011. He reflects on the history of the place and future hope.

MARK EINSELEN
Deacon, Church of the Ascension, Indianapolis, IN

This week we said goodbye to a special place. Goodbyes are typically difficult, but especially so when the parting follows so many years of good memories. This week’s goodbye was particularly hard.
Crystal Springs United Methodist Camp was a place of hellos. Located on the shores of natural springs, people naturally gathered there for refreshment. In 1860, Methodists acquired the haven and used it as a place to come together to hear lively preachers, to worship, and to fellowship. These revival meetings became regular occurrences each summer. Larger and larger crowds assembled and many more hellos were exchanged.
This became a special meeting place. People meeting people, people meeting God. While it was a young tradition on the banks of the Dowagiac River, it was part of an ancient practice of encountering the divine. Following their exodus from Egypt, the Israelites constructed a movable tabernacle in the wilderness. This was a meeting place to experience God’s work in their lives. While the structure was temporary, it pointed to something permanent, something eternal.
Eventually, the Israelites built a stone temple in the promised land, but history shows that this too was not permanent. Again, it pointed to something – or rather, someone – else. The incarnation of Jesus Christ closed the gap between The Creator and the created. God met with humans as a man. It was a meeting like none other.
This ultimate meeting was the focal point of the Methodists at Crystal Springs. Appropriately, they named their assembly hall “The Tabernacle.” This intentionally enshrined their connection to the historic practice of retreating to the wilderness to meet with God, just like the Israelites in the Old Testament. The edifice that the Methodists built in the woods in 1890 was a simple wooden structure, but its size hints at the vast numbers of souls it sheltered through the years. Thousands eagerly met under its vast roof for epic sessions of preaching and worship.
While it has been immensely important in so many lives, its value was in what – in who – it pointed to. Just as the Jewish tabernacle and temple were signs that pointed to Christ, so was this midwestern meeting place. Crystal Springs was not the object of the fixation, it was simply the venue where people met with God. Here the good news of God was announced. Here the call to meet with God was proclaimed.
And just as the first tabernacle moved through the wilderness, modern-day Methodists of Michigan move, too. The place where we encounter God and proclaim His good news has moved on from Crystal Springs Camp. We are people on the move. Our promised land is beyond this world.
The place where so many said “Hello!” to new friends has now heard its final goodbye. And like the bubbling springs by the river, my eyes well a bit. But just as the gentle springs continue to bubble up and ripple out into the irresistible flow of the river to be carried away to greater bodies of water, the impact of the place continues to ripple through the lives it has touched. The message of God’s good news flows forth beyond the boundaries of the camp.
Yes, saying goodbye was hard this week, but may we remember we are just passing through this land. Many of us greeted God at Crystal Springs, and it is this greeting that does not end. That is the hello that has no goodbye.

~ Crystal Springs Camp was decommissioned on Sunday, September 12, 2021. The Rev. Deacon Mark Einselen was among those present for the time of worship and remembrance. While studying architecture in college, Mark “worked with the greatest summer staff team at Crystal Springs United Methodist Church Camp from 2007-2011 (go team Lava-raptors!).” In 2012 he was the Interim Director at Crystal Springs. He currently serves the Anglican Church of the Ascension in Indianapolis, IN. He reports, “Most of my time is spent designing custom homes and walking through construction projects and mud. Washing dishes and teaching archery were some of my favorite camp activities, but meeting lifelong friends and seeing God at work in young people’s lives are what made the biggest impact on my life. Stargazing in the meadow and communion in the fire bowl were where I felt closest to God.”