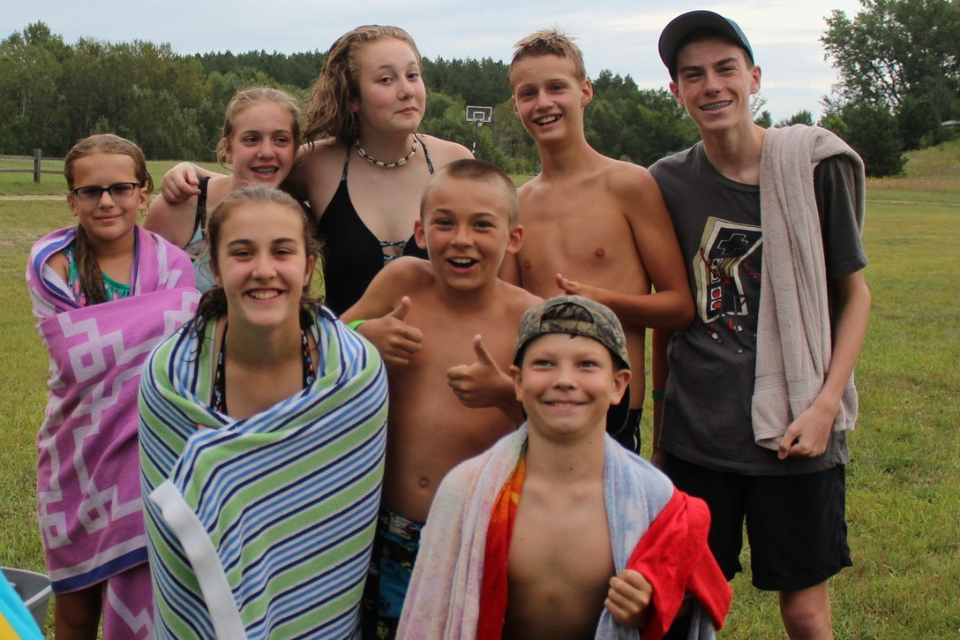 Lake Louise Christian Summer Camp is a year-round camp and retreat center in Northern Michigan, near Boyne Falls. As We Are Camp is for grades 9-13, and invites “imperfect people of all differing abilities, ethnicities, gender identities, income levels, races, and sexual orientations to join us and be fully included in the ever-widening circle of this faith community.” ~ photo courtesy camp Facebook page

Liz Carr tells a story of how campers at Lake Louise showed up to surround a fellow camper with love and care following the unexpected death of his mother.

LIZ CARR
Dean, As We Are Camp at Lake Louise

I’ve been thinking a lot about community lately. Who makes it? What does it look like? How does faith fit with this idea?

My pondering started when I heard folks at Annual Conference speak about “young people” as the “future of the church.” That phrasing didn’t sit right. Frankly, it’s incorrect. (I have enough hairs that sparkle in pictures now to state that, right?!) What I know for certain is that “young people” are the church. It’s up to those of us with more sparkly hair to get out of their way, to facilitate, and to meet their needs.

Today was a much-needed reminder of this for me. But there’s a bit of a backstory first.

As he and his friends were driving up to Lake Louise from Indiana, just over two weeks ago, one of my campers received a call that his mother had passed, unexpectedly. The young men in the car with him brought him to camp, as they frantically texted adults they trusted. I’m not sure that, at 17 or 18, I would have known what to do if my friend received a call like that. But these young men reached out for support so they could support their friend.

They were closer to camp than home, so they kept driving. When they arrived, we talked to the camper about what he wanted to do. As one would expect, he was pretty numb and said he thought he wanted to stay. We consulted his grandparents, and it was decided, together, that it would be a day-to-day call. We would ride the waves of grief and joy and remembrance together for as long as he would let us. He stayed all week.

The following Saturday, as campers were leaving, another young man stopped me and asked if he could catch a ride to the funeral if I was going. I told him I hadn’t heard when it was going to be. He already had most of the details. I said yes and told him we’d text when we were home to figure it out. In the meantime, I would have four seats in my car if he heard of others who wanted to go.

Today was that funeral. This morning, my daughter (my favorite camper) and I left Holland early, swung through Kalamazoo to pick up another counselor (who had also taken the day off work) to drive to Marshall to pick up the 3 campers meeting us there. Each of them had arranged for the day off work, negotiated with their parents, and showed up. We then drove the three hours south to the home of 2 other campers who had hosted 3 more campers (again rearranging work schedules and working it out with parents) who had driven in the night before.

Together, 9 campers and 2 adult volunteers from As We Are Camp at Lake Louise drove to the church (more slowly than they probably wanted because I was the first car out and have out-of-state plates!) where we met 4 other adult volunteers and 4 more campers. 13 campers, 6 adult volunteers in total. To be clear, I didn’t recruit anyone to go. I shared information as I had it, but the campers figured this all out. I just drove.

The look on the grieving young man’s face as we all walked through the door to hug him and support him spoke to this idea of a community rooted in faith. I don’t know if he knew we were coming. I don’t know if he would have believed it until he saw this group. What I do know is his friends knew he needed support and love on this day. They asked for the tools to make it happen, and they followed up until it did. That’s faith in action. That’s loving your sibling in the way Jesus was talking about. That’s what happens when we pay attention to “young people”—they teach volumes, quietly and unabashedly. Even (or maybe especially) when they don’t have “just the right” words, they show up. That sounds an awful like what church should be (and can be). At the very least, it’s the faith community that is camp.