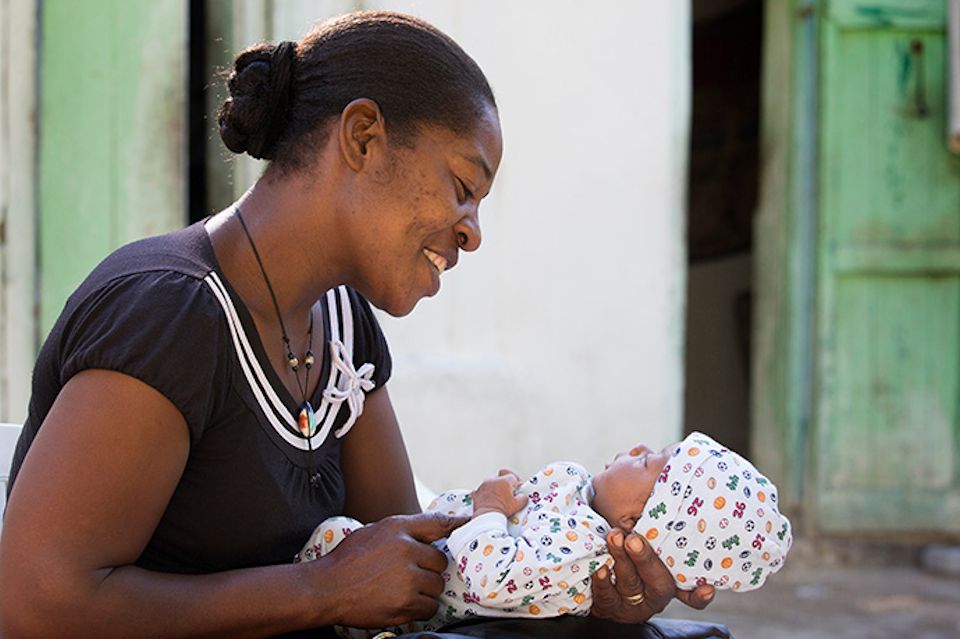 Yolande Gabriel, a maternal health worker for Haiti Artisans for Peace International, checks on one-month-old Rubens Élise Lauture at his home near Mizak, Haiti, in 2013. Haiti Assets for Peace International was among programs that received grants from the United Methodist Board of Global Ministries during its spring meeting. UM News file photo/Mike DuBose

A gift to Haitian Assets for Peace International (HAPI) is among the $13 million in grants made by the General Board of Global Ministries during their spring meeting.

The United Methodist Board of Global Ministries approved more than $13 million in grants and disbursements during its May 11-12 virtual spring meeting, including $3.5 million to help realize a late bishop’s dream of making The United Methodist Church in Africa self-sufficient through agriculture.

More than $1.7 million went toward projects to improve people’s health around the globe through better infrastructure, training, medicines, and medical supplies.

In a closing prayer on May 12, Bishop Hee-Soo Jung of the Wisconsin Conference, also president of the Board of Global Ministries, stressed the long view of the agency’s work.

“The kingdom is … beyond our vision,” he said. “We accomplish in a lifetime only a tiny fraction of the magnificent enterprise.”

He said that the seeds being planted by today’s Global Ministries projects would grow to crops that future generations will benefit from and tend.

“We may never see the end results,” Jung said. “But that is the difference between the master builder and the worker. We are workers, not master builders.”

Global Ministries launched the Bishop Yambasu Agricultural Initiative in 2018. It was renamed in honor of Bishop John K. Yambasu after his August 2020 death in a traffic accident in Sierra Leone. The project received $3.5 million. Yambasu was bishop of the Sierra Leone Conference from 2008 until his death and held other leadership positions in the church.

The initiative has already awarded about $3 million in grants to 12 African conferences.

The 2022-23 strategy for the Bishop Yambasu Agricultural Initiative is to scale up production and marketing to commercial-scale levels.

“I think this is a really worthwhile cause,” said Roland Fernandes, the top executive at Global Ministries. “And I think we’ve had great support from the episcopal areas in Africa for it.”

Another $2 million was approved for central conferences in Africa to help them increase their administrative capabilities and financial sustainability so they can effectively manage their growing churches. A separate $1 million award will fund gatherings for missionaries, staff, and mission partners.

More than $1.7 million in smaller grants were approved to support global health efforts around the world. The grants include nearly $627,000 to fund the Imagine No Malaria campaign in Zimbabwe, Angola, Burundi, Nigeria, and Congo. In addition, almost $955,000 was approved to strengthen health care in Sierra Leone, Haiti, Burundi, Nigeria, and Congo.

“I, representing our team, bring these grants to you,” said Kathleen Griffin, a senior technical advisor for the Global Health unit at Global Ministries. “They represent people, people, people, and we thank you for your consideration and our partnership with these communities.”

United Methodist Committee on Relief grants totaled more than $7.8 million. The grants include:

New York Conference Bishop Thomas J. Bickerton told meeting attendees that Global Ministries needed to push forward during this “latest of versions of the worst of times.” He cited the global COVID-19 pandemic, mental health deterioration, racism, the war in Ukraine, wildfires, droughts, hurricanes, and the likely splintering of the United Methodist denomination.

“But let us remember we are not the first generation to deal with what feels like insurmountable obstacles,” Bickerton said, citing the hard life of the disciples tasked with spreading the Gospel after the death and resurrection of Jesus.

“But look at what history reveals,” he said. “These people did the best of things during the worst of times despite the myriad of injustices inflicted upon them, and because of their efforts and inspiration, we are here today. Because of God’s grace at work in them, we are here today.

“Guess whose turn it is now?” he added. “We are the generation who’s being called upon to deal with the challenges in front of us.”