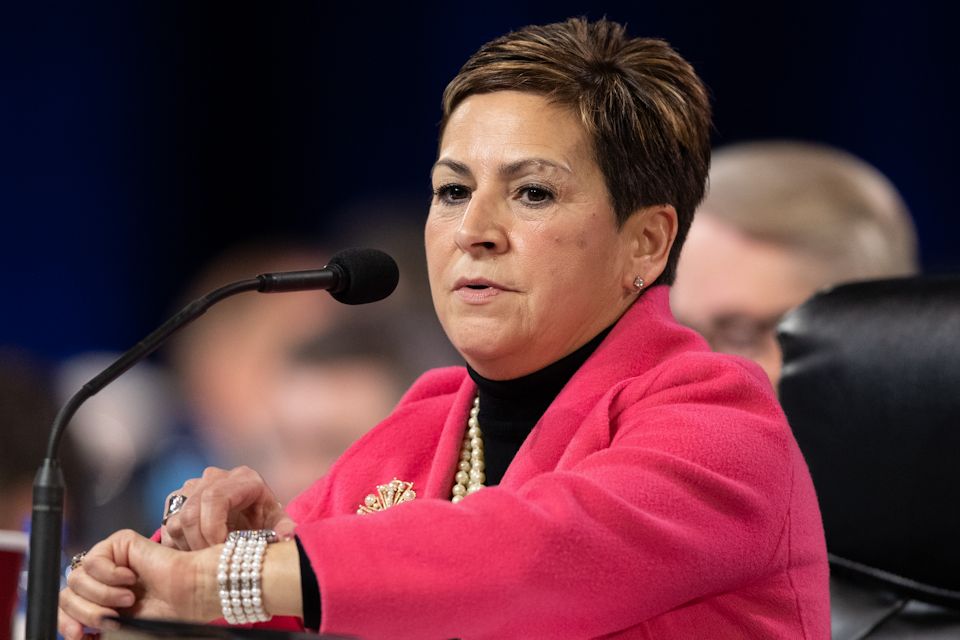 Bishop Cynthia Fierro Harvey, president of the Council of Bishops, announced on March 22 that the Virtual one-day session of General Conference previously called for May 8, 2021, has been cancelled. ~ UM News file photo/Mike DuBose

The Council of Bishops has pulled back from its plan to hold a one-day virtual General Conference in May 2021. Council President Cynthia Fierro Harvey says more listening and discernment are ahead.

The United Methodist Council of Bishops has canceled its call for a special virtual General Conference on May 8.

The bishops made the decision to cancel during a March 22 online meeting that was closed to the public.

The bishops also announced that they plan to use their regularly scheduled April meeting to have conversations based on results of listening sessions and discern a possible new timeline.

“Much has been learned over the past few weeks and the extended timeline will allow for even deeper listening by the bishops at the general church level but also in our residential settings,” Bishop Cynthia Fierro Harvey, Council of Bishops president and leader of the Louisiana Conference, said in a press statement after the meeting.

Last month, the bishops called the special one-day session on the same day the Commission on the General Conference announced that COVID-19’s threat had forced the postponement of the global denomination’s top lawmaking assembly a second time. The full General Conference, originally set for May 2020, is now set for Aug. 29-Sept. 6, 2022. The meeting venue is still Minneapolis.

The commission appointed a technology study team to consider ways to hold the global conference virtually while ensuring full participation of the nearly 900 voting delegates from four continents.

Ultimately, the team concluded and the commission agreed that no virtual solution could overcome barriers that include a 16-hour time difference across the denomination, inequities in internet access and the need for vote security.

The bishops had planned for the May 8 General Conference only to be long enough for a quorum of delegates to suspend the rules so delegates could vote by mail on 12 legislative items. The items mostly dealt with administrative functioning amid the General Conference delay, and the bishops planned to announce the results of the votes on July 13.

However, the bishops faced some of the same challenges that the General Conference commission did, as well as concerns from delegates that they would be cut out of the deliberative process.

Of the 862 delegates elected to the coming General Conference, 55.9% come from the U.S., 32% from Africa, 6% from the Philippines, 4.6% from Europe, and the remainder from concordat churches that have close ties to The United Methodist Church.

The bishops’ plans for a special General Conference already were facing pushback across the denomination.

The advocacy group the Africa Initiative sent questions to the Council of Bishops citing the General Conference commission’s finding that internet and even electricity is not readily available in some areas where United Methodists are located.

“This is absolutely true for us here in Africa. How can we have this Special Called Session without delegates from Africa being disenfranchised?” asked the Rev. Jerry P. Kulah, Africa Initiative’s general coordinator, in a letter to bishops. Kulah is also a General Conference delegate from Liberia.

As the bishops were meeting on March 22, the denomination’s top court also released a decision that could help church leaders on one matter before the special General Conference.

The first of the bishops’ 12 pieces of legislation proposed an amendment to church law to comply with a decision of the Judicial Council. On March 22, the church court issued a memo clarifying how annual conferences — church regions — can comply with the ruling related to clergy due process even before General Conference is able to meet.

For now, planning for when delegates can meet to deliberate on the denomination’s future remains a work in progress.

“We are thankful for the collaboration fostered with the Commission on General Conference and especially grateful for the work that had already begun in the planning for the special session,” Harvey said in the press statement.