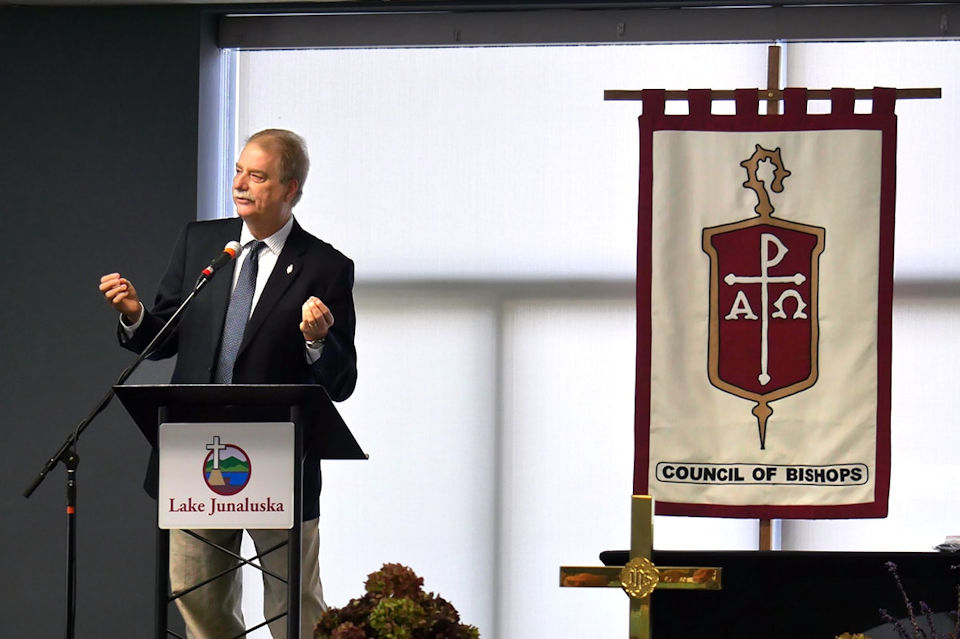 Bishop Kenneth H. Carter, president of the Council of Bishops, discusses the strained United Methodist connection in his presidential address at the bishops’ fall 2019 meeting in Lake Junaluska, N.C. He urged adopting a posture of convicted humility. ~ UMNews/Heather Hahn

Council of Bishops President Ken Carter calls colleagues to work, with humility, towards the unity they promised in their consecration vows as bishops.

“Words like ‘disaffiliation’ and ‘resistance’ and ‘gracious exit’ and ‘dissolution’ have become the common language of our vocabulary,” Bishop Kenneth H. Carter acknowledged in his address to the Council Bishops.

The United Methodist connection, the president of the Council of Bishops added, “is strained.”

However, Carter indicated he is not ready to throw in the towel on the multinational and theologically diverse denomination.

He insisted that his fellow bishops could still work toward the unity they promised to seek in their consecration vows. He suggested starting with the words of Jesus in Matthew 22:37-40, which lists love of God and love of neighbor as the two greatest commandments.

“So what if we began to redefine the connection as the love of neighbor?” Carter asked his colleagues. “And what if we did this from a posture of convicted humility?”

The phrase “convicted humility,” he explained, refers to an attitude that “combines honesty about the differing convictions which divide us with humility about the way in which each of our views may stand in need of corrections.”

Carter, who also leads the Florida Conference, spoke to more than 100 active and retired bishops who came from four continents to the meeting at Lake Junaluska Conference and Retreat Center.

His audience is still grappling with the fallout of a turbulent special General Conference in February that saw delegates vote 438-384 to adopt legislation that tightens bans on same-sex weddings and “self-avowed practicing” gay clergy. The majority of bishops backed a plan to leave questions of ordination up to conferences and marriage up to individual clergy and local churches.

Bishop Benjamin Boni, who leads the Côte d’Ivoire Conference, agreed with Carter that the church has difficulties.

After the address, Boni said in French that only God can put the church in order, and he urged all hearts to ask God what can be done to preserve unity.

The denomination’s top lawmaking body is set to gather again May 5-15, 2020, with a number of new delegates.

In the meantime, some bishops have been involved in conversations about the denomination’s future and possible ways to divide the denomination and its assets. Bishops preside but do not have a vote at General Conference.

Whatever form the church eventually takes, Carter expects United Methodists will still have to work together in a time of tension. Ahead of the bishops’ meeting, he spoke to UM News of his suggestion that a moratorium on church trials related to LGBTQ restrictions be paired with a loosening of the trust clause for congregations that want to leave.

He briefly alluded to the idea in his presidential address when he asked his episcopal colleagues to consider: “How can we have accountability and restorative justice, in this season, without trials? How can we accompany conversations without needing to control them, conversations that we are sometimes tempted to avoid, conversations that are across our differences?”

Ultimately, he said, the denomination may discover new ways of embodying unity.

“I hope this will create more space for contextual differentiation, even as we strengthen the bonds of our missional partnerships,” he said.

At the conclusion of his address, the bishops gave Carter a standing ovation.

Bishop Mark J. Webb, who leads the Upper New York Conference, said he thought there was hope in Carter “naming the reality and calling for a new form of unity.”

Bishop Cynthia Moore-Koikoi, who leads the Western Pennsylvania Conference, appreciated Carter’s redefining what the connection is about. “It’s about loving our neighbors,” she said.

She noted that organizers of the World Council of Churches’ 2021 assembly have chosen the theme: “Christ’s Love Moves the World to Reconciliation and Unity.”

“Our president of the Council of Bishops was so inspired in his address that it matched what many in the whole world are dealing with,” she said. That includes the 350 member denominations of the World Council of Churches.

Big decisions about The United Methodist Church’s future will be in the hands of 862 General Conference delegates, split evenly between lay and clergy. But in the meantime, bishops still have a role to play, Carter said.

“Let us support one another in our residential areas, to lead in ways appropriate to our contexts, and let us refrain from doing harm to one another,” Carter concluded. “And this is the good news — let us imagine that God is using all of this to make us perfect in love in this life.”

~ Click here for the full text of Bishop Carter’s message.