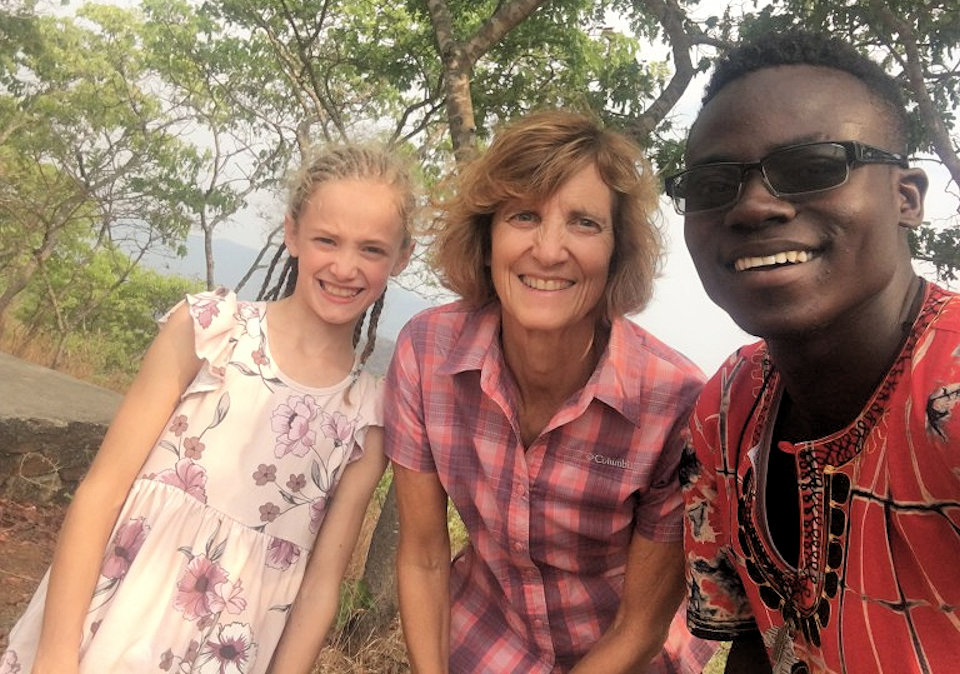 When Superintendent of the Grand Rapids District, she helped raise $500,000 for the Ubuntu Centre at Africa University that recently housed visitors from Iowa.

We simply wanted to climb to the top of Mount Chiremba, which overlooks United Methodist-related Africa University in Zimbabwe. Larry, Ben, Paul, and I parked Larry’s truck at the Old Mutare Methodist Mission to begin our 4,000-foot climb when we were suddenly surrounded by eight children and youth from the Fairfield Children’s Home, who decided to hike with us. We sang songs together as we walked the path. It didn’t take too long, however, for one of the oldest boys to lead the way. Instead of taking a trail, however, he started bushwhacking straight up the mountain!

We were definitely blazing our own trail through the thick brush, and I regretted wearing shorts. The adults all had sturdy shoes and were huffing and puffing, but the kids were scampering up the mountain in sandals or flip flops and carried no water or food. After an hour and forty-five minutes, we finally reached the top and marveled at the view. We pointed out to the children that the Old Mutare Mission and the chapel, Ubuntu Centre, and hilltop cross at AU are all intentionally geographically and spiritually aligned.

Then the party began. Everyone was hungry and thirsty, so we shared everything we had: a few water bottles, two apples, a protein bar, and two granola bars, carefully cut into twelve pieces with Larry’s knife so that all could be fed. Paul played the harmonica, the kids danced, and we all sang, right there on the top of Mount Chiremba. “This is the bread of life and the cup of salvation, given for you.” Without a doubt, it was the heavenly banquet on earth.

One of the students we met during our time at Africa University was Samson, or Sam for short. Sam, who was our trip photographer, said that the first sign he saw when he initially visited AU was, “Africa University is made for leaders.” Wanting to be educated at such a university that emphasizes leadership, Sam tried for three years before receiving enough scholarship help to be able to enroll. You can hear Samson tell his story by clicking here.

Samson said that he was nine years old when he met first met Iowan Beverly Nolte in Nigeria. Sam also received school supplies from a shipping container sent by Iowa United Methodists to Nigeria. With tears in his eyes, Samson vividly remembered the containers, which were filled with clothing and other necessities. His mother received items as well. Samson, now 25, is very grateful for the help of others and wants to devote his life to making a difference.

AU is a premier university in Africa. Founded in 1992, Africa University has grown steadily and produces future leaders for the continent of Africa. These are the kinds of inspirational signs that are seen all over campus and on billboards and buses: Africa University: Investing in Africa’s Future; Africa University: Leaders Are Made Here; and Learn Here, Stay Here, Lead Here, and Change Africa.

We also had a chance to meet with three AU students from the Congo who are receiving scholarships from Iowa: Sam (not Samson), Lumiere, and Shonsee. Sam spent the past year in intensive English classes and is now in his first year, majoring in international relations. Lumiere is in her third year and is majoring in medical laboratory sciences. And Shonsee is in her fourth year, majoring in computer science. Betty and Rev. Kiboko Kiboko are from Iowa have been instrumental in encouraging Iowa churches to support AU students. All three students have amazing dreams for their future and expressed gratitude for the support and prayers of others.

When we asked Sam, Lumiere, and Shonsee what challenges they and other students at AU face, a primary concern is what tomorrow will look like. Because of the uncertain economy in Zimbabwe and the fact that many students are not able to be financially supported by their parents, they have to rely on scholarships, which are wonderful but do not cover everything. Some students can’t afford the meal plan. Others are never able to go back home during school breaks because of travel costs. Nor are they always able to purchase computers. Students uniformly love AU, but the wish list is long.

Simple things like having TVs in dorms and up to date gym equipment are difficult. There are not enough laboratories. Students live three to a room, and there is not a great amount of personal space. Yet AU is a joy-filled, Christ-centered university where students receive a first-class education and weekly chapel often has standing room only.

Shonsee, Sam, and Lumier said that they are learning and growing at AU, as students of different cultures, languages, and religions live, serve, and make a difference together. They are an ubuntu family, seeking to create an ubuntu world where “I am because you are.” Sam, who was raised in The United Methodist Church and has worked in the church, says that his faith has helped him grow spiritually. Lumiere is in the Africa University choir, and her Christian faith prompted her to help in the education of children when living at home. Shonsee believes that we must give a hand to others who are crawling and need to find work to create a sustainable and healthy life.

I am proud of a United Methodist university that reaches out to help students from across the African continent to not only receive an education but to give back to their country and the world. Africa University exists because United Methodists are committed to higher education on the Africa continent. Did you know?

AU is a leader in higher education in Zimbabwe and is raising moral, ethical, and spiritual leaders for the transformation and redemption of our world. Africa University welcomes mission teams to come and see what is happening on campus. They would also love to work with local churches, districts, and conferences who desire to fund scholarships or special projects. Thank you for your prayers, encouragement, and financial support for the school of dreams in the valley of hope.

~reprinted with permission from Bishop Haller’s blog, Leading from the Heart.