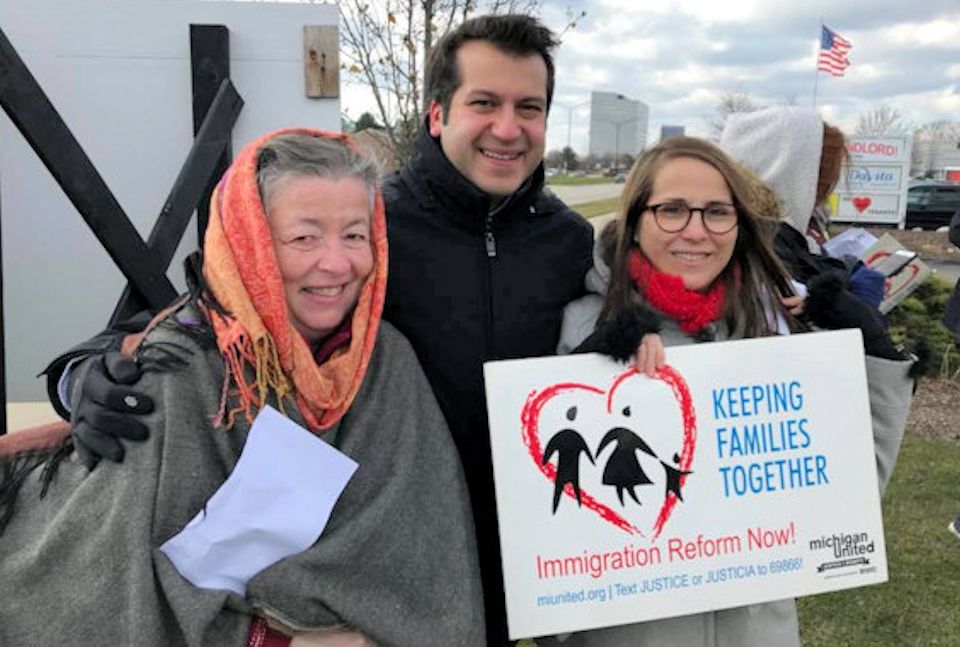 The Rev. Paul Perez serves as President of the Board of Justice For Our Neighbors Michigan. Shown here with Melanie Goldberg and Tori Booker from the Metro Detroit Office. ~ Facebook/Paul Perez

My son Josh, who is 15, starts his first job this summer. Early this week, I sat down and helped him fill out his paperwork. W-4s, the I-9, Direct Deposit, and Work Permit. Oh my! We sorted through them all, making sure the right boxes were checked and the proper supporting documents (State ID, Social Security, Birth Certificate) were filed safely in his manila folder. Two things weighed on my heart. The first, “My little guy is growing up!” The second, “What a privilege it is to be a fully documented citizen of the United States of America.”

I use the word privilege — defined by Merriam-Webster as: “a right or immunity granted as a peculiar benefit, advantage, or favor” – because, for me, it perfectly describes the reality of citizenship. Not everyone in the world is a citizen of the U.S.A. Not even everyone who lives in the U.S.A. is or is able to become a citizen.

Personally, I did not do anything to “earn” my citizenship. I was simply born in the U.S.A. Having citizenship grants me particular rights and unique advantages that my neighbors, who are not citizens, cannot access. While filling out my son’s hiring paperwork was a nuisance, it was not an insurmountable barrier to his employment because of our documented status as citizens.

Over a decade of volunteering with Justice for Our Neighbors Michigan, I’ve met people navigating the immigration system and come to clearly understand my privilege.  Becoming a U.S.A. citizen is hard. It is costly in terms of both hours and dollars. Contrary to popular imagination, there is no “one line,” “one form,” or “one fee” that someone can get in, fill out, or pay to receive citizenship. There are multiple lines, multiple forms, multiple fees, not to mention the multiple interviews and court dates, in a complicated maze of steps and processes that is the U.S.A.’s immigration system. Because that system was built piecemeal over time by disparate legislation, policies, and procedures, what works for one person may not work for another. A pathway to citizenship, most often, must be charted on a case-by-case basis. I’ve seen it take years, even a decade or more for cases to resolve.

For many people living in the U.S.A., there is simply no pathway to citizenship. An estimated 11 million individuals who entered the country without authorizing documentation – commonly referred to as “undocumented immigrants” – have almost no option of a pathway to citizenship no matter how long they have lived in the U.S.A., if they married to a citizen, or have citizen family members. I have prayed with people, some not much older than my son, who faced this reality. They were brought to tears after meeting with a JFON attorney and hearing there was no legal avenue for them to pursue. They were in detention at Monroe County Jail, awaiting deportation after getting pulled over for having a broken taillight. Seeing their tears and hearing their prayers was heartbreaking. Witnessing their courage and perseverance to live their life to the fullest and fight our broken immigration system continues to inspire me.

These experiences, grounded in my commitments and practices as a Christian disciple, led me to embrace the “social-membership theory” of citizenship articulated by Joseph H. Carens in his book, The Ethics of Immigration. Dr. Carens argues that “living in a society over time makes one a member, and being a member generates claims to legal rights and legal status” (pp. 159–160).

The people I have met and know who are both documented and undocumented immigrants are members of their communities, having in some cases lived in the U.S.A. longer than I have been alive. They belong here. This is their home. They should be citizens. They are calling for a clear, humane pathway to citizenship. It is time for those of us who enjoy the privilege of citizenship to answer that call and join in demanding better of our nation.

This week there are two campaigns launching which put this conviction into action:

I invite you, as your Christian conscience leads, to join me in these two campaigns. Follow the links above to learn more and participate in advocacy opportunities.