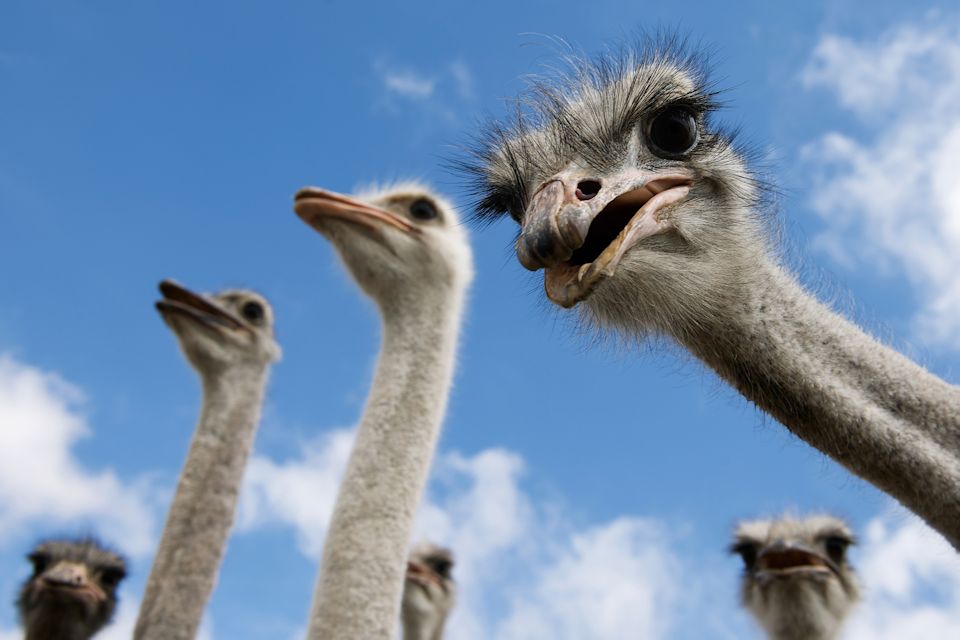 The season of Lent embraces ancient symbols. Here’s a new symbol that puts the focus on thinking outside the box of human experience to encounter God’s truth.

We have now entered into those 40 days before Easter, known as Lent. Lent is a season of many symbols … ashes, crosses, palm branches, purple cloth, and even pretzels, to name a few. To learn about the more traditional side of Lent, check out Lent 101.

Lynn and I were driving down the highway on a bright afternoon in March. In the distance, we saw a truck. “Looks like a furniture truck,” Lynn said. “A truck full of tables with legs in the air.” Curious.

We got closer. “Looks more like golf clubs to me,” I replied. “With those covers on them.” More curious.

We closed in on the back of the truck. “Lynn, those table legs, golf clubs, whatever, are moving.” Lynn sped up.

That’s when we discovered that the truck was carrying about 20 ostriches. Some of their heads were covered with socks. (Ostriches apparently get a little nervous when transported down the road at 80 km an hour in the back of an open truck.)

As you may have guessed, we weren’t in Michigan anymore. Lynn and I were in South Africa for a five-month term as volunteers in mission. We were enjoying Lent in a township near Cape Town called Mitchell’s Plain.

We experienced several new customs that year. We learned how to fold palm crosses in a whole new way. Our friend, Sam, borrowed a donkey on one side of the township then walked it all the way to church on Palm Sunday, “Because the Lord needs it.” We each, along with others, preached in two different circuit churches on Good Friday morning. We ate pickled fish at the circuit superintendent’s house that afternoon.

But none of that was as eye-opening as the truckload of ostriches. In those moments before catching up with that truck, neither Lynn nor I would have ever guessed that we were seeing ostriches. That was just way outside our familiar, golf clubs and table legs, frame of reference.

To some degree, Lynn and I were blind to what we were actually witnessing because we were looking at South African reality with a Mid-American mindset. Which, then and now, leads me to wonder how many times we miss God’s reality because of our human mindset?

Since that time in South Africa, the ostrich has been a personal symbol of Lent for me. That bird taught me that it is important to make an intentional attempt to stretch our perceptual boundaries as suggested in one of my favorite hymns, Open my Eyes, that I may See. That’s a lesson not just for the season of Lent but for every day.

Lent 101 includes suggested activities to enhance your journey to Easter. There are ideas on how to get your head out of your usual stuff and stick your neck out with some new relationships and routines.

Whatever else you do between now and April 12, please look beyond your own perceptions and turn your eyes upon Jesus.