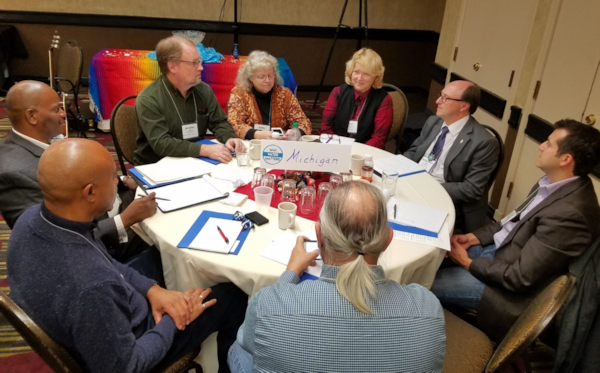 This Perspective on Hope encourages those at the feast to give thanks for God’s earth.

“In the beginning, God created… and God called it good!”

When my wife, Ruth, was a young girl her Grandma Sophie asked her to identify which of two pieces of beautiful carnival glass she would someday want to receive. These two artistic pieces were treasured by Grandma Sophie because she appreciated their beauty. Ruth chose a delicate piece of the rich purple glass with a wavy edge and grape vines all around.

The time came when she eventually received that treasured gift. She treasured it not simply because of its beauty but because of the deep relationship it represented. A number of years ago an unfortunate bump sent the beautiful gift crashing to the floor. Some things we care deeply about can never be replaced. We searched off and on for years and only a few months ago found a smaller version of that same piece. While it does not fully replace the original it does give us a beloved reminder. We have cared for it gently now, having gone through that first experience of loss. Perhaps this can be a guiding value for much of life itself.

In recent months we have all been horrified and filled with anguish when we received news of mass shootings and attempted shootings occurring across the country. Immediately following the most recent events there was considerable chatter on social media stating that it has become shallow to say, “We are praying for ______ “ (fill in any latest atrocity) if we are not also actively seeking to prevent future atrocities. One of the basic elements of the argument for this is that if we care enough to pray then we need to care enough to make the systemic changes to prevent future atrocities. To do otherwise raises doubt about the sincerity of the prayers.

What might shift within us if we looked at this set-aside day for giving thanks and all of its family ceremonies and traditions through the same lens as the challenge about “We are praying for ____”? The exception or difference would be that instead of the atrocity and violence being against human beings, in this case, it is the violence being perpetrated against the earth itself. Pollution is an act of violence, an atrocity perpetrated against land, air, water, vegetation and creatures. Overuse and misuse of natural resources is an act of violence against nature.

When an individual human being or group of human beings are murdered or attacked we are rightfully horrified and upset. We know it to be wrong and out of balance with God and one another. Why is it that so many human beings, and the systems they create, cannot see this same emotional care and outlook for the rest of God’s creation? The inability or unwillingness to do so seems to make a mockery of “giving thanks” for the sumptuous meal that will get consumed in many households across the U.S. on Thanksgiving Day.

On Thursday, November 16th, one-hundred people from across the U.S. gathered in Minneapolis, Minnesota for a summit focused on Why Water Matters. Seven of us from the Michigan Area participated, and I was on the planning team. Two other participants from Michigan or with Michigan roots also were involved. (See lead photo.)

Water, land, air, vegetation and creatures are all an interconnected web of life. Whatever we do to one will impact all of the others, and ultimately will impact us. While the majority of those at our gathering were United Methodists we were also joined by: UNESCO Water Project co-chair; a regional Director for Nature Conservancy; Traditional Native American teachers and ceremonial leaders; United Methodist Earth Keepers; three United Methodist bishops (including our own Bishop David Bard who remained the entire time); authors and illustrators related to the Anishinaabe Water Walkers from Northern Michigan and Minnesota.

One of the keynote speakers for the Water Summit was Dr. Randy Woodley, Distinguished Professor of Faith and Culture and Director of Intercultural and Indigenous Studies at Portland Seminary. Woodley is a legal descendent of the United Keetoowah Band of Cherokee of Oklahoma, and an ordained clergy of the American Baptist Church. In his keynote message he reminded the gathering of the what the scriptures have to say about how we are to relate to creation-care. In the first chapter of Genesis it reminds us that God is Creator:

In the beginning God created … and called it good.

The scripture makes it quite clear that the Creator loves the creation. The first chapter of the Gospel according to John reveals to us that the One we came to know as Jesus the Christ is ultimately also Creator:

God was in Christ reconciling the world ….

If we want people to know that we consider scripture to be a primary guide for Christian discipleship then creation-care would be central to that lifestyle. After all, why would I mistreat that which God created and called good? Why would I mistreat something that is treasured by God?

Ironically and sadly while the Why Water Matters Summit participants gathered the announcement came that the oil pipeline snaking across the Dakotas spilled over 210,000 gallons of oil onto the earth. This is a clear example of what I am trying to convey in this blog.

God has gifted us as human beings to be a part of creation and to sustain our lives from the fruits of the land. God has also called us to be true stewards of and with the earth, not those who should dominate or use it up.

As you gather at tables for your harvest celebration may you offer thanks for creation itself and offer a deeper resolve to be a creation-caregiver in the year ahead.  Amen.