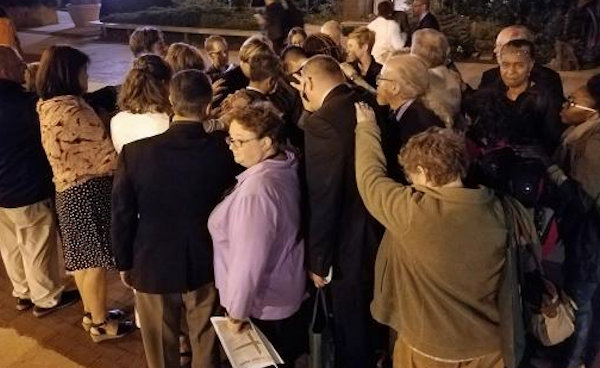 As required by the Judicial Council, two bishops have ruled on questions stemming from issues around gay ordination.

What is the role of conference boards of ordained ministry in determining whether clergy candidates meet United Methodist standards related to homosexuality and marriage?

Two bishops ruled on questions of church law stemming from that issue, meeting the Dec. 31 deadline set by the Judicial Council, the denomination’s top court.

In each of their rulings, both bishops took issue with the words “ascertain” and “believe.”

“Members of the Board of Ordained Ministry are not required to affirmatively initiate an investigation to ascertain the sexuality of candidates for ministry, nor can they base their votes on subjective beliefs and opinions about candidates not based on fact,” wrote Middleton in a decision sent to the Judicial Council on Dec. 20.

Similarly, Dyck wrote in a decision published Dec. 31: “To believe something doesn’t necessarily mean that one knows for certain. If someone on the Board of Ordained Ministry or in the clergy session believes they know something about a candidate, this is hearsay unless the candidate volunteers the information.”

The board’s responsibility and authority is “to be satisfied as to the ‘highest ideals’ of the candidates as they examine and discern their readiness and fitness for ministry,” Dyck wrote.

The rulings follow last year’s public announcements from the New York and Northern Illinois conference boards of ordained ministry that they would not consider sexual orientation and gender identity in the clergy candidacy process. Both conferences have long advocated for ending the denomination’s restrictions related to LGBTQ individuals.

In December, Dyck ruled her conference board’s statement out of order. In her order, Middleton said, “if a person being evaluated is known, by extrinsic evidence or self-admission, to be a self-avowed practicing homosexual, they cannot be commissioned or ordained under the rules of the Discipline.”

The bishops’ rulings are the most recent development in the denomination’s intensifying debate, and the decisions are not the final word.

The Judicial Council must review all bishops’ rulings of law. The court next meets in April.

At least four other boards of ordained ministry in the United States have announced that they also will not take candidates’ sexual orientation or gender identity into consideration.

The Book of Discipline, The United Methodist Church’s governing document, states that all individuals are of sacred worth but the practice of homosexuality “is incompatible with Christian teaching.”

The denomination bans the ordination of “self-avowed practicing” gay clergy and defines marriage to be between one man and one woman. It also requires clergy to practice fidelity in marriage and celibacy in singleness.

Under the Discipline, conference boards of ordained ministry examine clergy candidates to see if they will dedicate themselves “to the highest ideals of the Christian life.”

To this end, candidates for ordination must agree to “exercise responsible self-control by personal habits conducive to physical health, intentional intellectual development, fidelity in marriage and celibacy in singleness, integrity in all personal relationships, social responsibility, and growth in grace and the knowledge and love of God.”

Conference boards evaluate candidates’ responses to examinations and recommend candidates who satisfy their requirements to the annual conference clergy session. The clergy session then votes on whether the candidates meet the standards for provisional or ordained status.