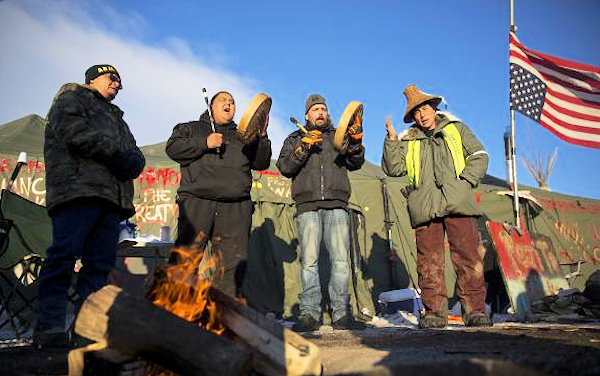 Native Americans from left, Eugene Sanchez, Jason Umtuch, Martan Mendenhall, and Hugh Ahnatock, all of Portland, Ore., drum and sing at the Oceti Sakowin camp where people have gathered to protest the Dakota Access oil pipeline in Cannon Ball, N.D., Sunday, Dec. 4, 2016. The U.S. Army Corps of Engineers said it won't grant an easement for Dakota Access oil pipeline in southern North Dakota, handing a victory to Standing Rock Sioux tribe and its supporters, who argued the project would threaten the tribe's water source and cultural sites. ~AP photo/David Goldman

Situation remains complex but Advent seen as a time to celebrate a win for tribal sovereignty and water safety.

United Methodists who supported the Standing Rock Sioux protest of the Dakotas Access Pipeline cheered the federal government’s decision to deny a construction easement under a dammed section of the Missouri River, and to look for alternative routes.

“We’re so excited over the decision, and mindful of all the people who have worked so hard to get to this point,” said the Rev. David Wilson, superintendent of the Oklahoma Missionary Conference.

The Standing Rock Sioux of North Dakota began their protest months ago, arguing that the pipeline as planned would threaten lands sacred to the tribe, as well as water safety.

Based at a growing camp near Cannon Ball, N.D., the protest has drawn support from many other tribes, as well as environmentalists, religious groups and even U.S. military veterans.

The U.S. Army Corps of Engineers announced Dec. 4 that it would not permit the pipeline to go under Lake Oahe, a section of the Missouri River, and that another route would be sought.

President-elect Donald Trump has voiced strong support for the pipeline, raising questions of whether the decision might be reversed. But United Methodists who joined the protest were upbeat anyway.

“We want to celebrate this win,” said the Rev. Mike Flowers of the Dakotas Conference’s Spirit Lake Ministry Center, which has helped supply protesters. “What better time to be rejoicing than Advent?”

Other United Methodists noted the complexity of the situation, especially for residents of the Dakotas.

“We must be careful to not assume that everyone is opposed to the pipeline or that everyone is making money in big oil,” said the Rev. Kermit Culver, district superintendent for the Sakakawea District serving Bismarck, N.D., and the Bakken Oil Field.

“We have congregations in the heart of the Bakken (and) hundreds of United Methodists in law enforcement, the National Guard and state government. They all need our support and prayers.”

The Rev. Ross Reinhiller leads Faith United Methodist Church, in Williston, North Dakota, and his congregations has both supporters and opponents of the pipeline.

He said he would have preferred for the Corps to announce another route, but believes the Dec. 4 decision will ease a tense situation between protesters, authorities and construction workers.

“This really takes that pressure off,” he said.

The 1,170-mile Dakotas Access Pipeline is a $3.8 billion project of Dallas-based Energy Transfer Partners, intended to bring crude oil from North Dakota to a shipping point in Illinois. The pipeline is nearly finished. The only work left in North Dakota was to have been the segment under Lake Oahe.

Supporters have touted the pipeline as a safe, job-producing project that has followed the government’s permitting procedures and will increase U.S. energy independence. They decried the Corps’ Dec. 4 announcement.

President Obama addressed the issue in November, saying he hoped to accommodate the Native Americans’ concerns and that an alternate route was under consideration.

Wilson, a member of the Choctaw Nation of Oklahoma, said the pipeline as planned was an infringement on the sovereignty of the Standing Rock Sioux, and raised serious environmental concerns, including for water safety.

He has made four trips to the protest encampment, delivering supplies from Oklahoma Indian Missionary Conference churches. He described the protest as historic.

“This has been the one issue that has brought the tribes together,” Wilson said.

Bishop Bruce Ough of the Dakotas Conference also has visited the camp site, as have the Rev. Susan Henry-Crowe, top executive of the United Methodist Board of Church and Society, other church agency leaders and United Methodist clergy and laity.

“This victory demonstrates the power of peaceful, prayerful resistance,” she said in a statement.

Ough called for prayer for all affected.

“The situation in North Dakota continues to grow and impact the lives of so many,” his statement said. … “We must help all of those who are in need because of the current situation, those at Standing Rock, those in the Bakken and our government officials. Prayer is the most powerful tool we have.”

The Rev. Chebon Kernell, who oversees Native American and Indigenous People’s ministries for the United Methodist Board of Global Ministries, and Mary Andreolli, head of communications, were at Standing Rock Dec 1-5, to support the Native American leadership and community there.

The mission agency is sponsoring an awareness event and press conference about access to water as a basic human right at 10:30 a.m. EST Dec. 12 at the National Center for Civil and Human Rights in Atlanta.

North Dakota has attracted thousands of workers from across the United States and abroad, as oil companies set up hydraulic fracturing, or fracking, operations that extract tens of billions of dollars’ worth of oil and gas from the Bakken shale.

The decrease in oil prices has caused the industry to cut hours and slow down exploration. Many families are experiencing loss of income but not a reduction in expenses.

North Dakota saw a 200 percent jump in homelessness in 2014, the biggest increase of any state.