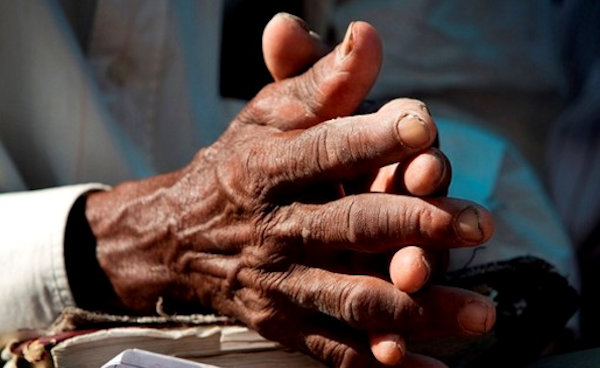 The Michigan Area joins UMCOR in prayer and partnership with those suffering the fury of Hurricane Matthew.

October 4, 2016—As Hurricane Matthew barrels through the Caribbean, the United Methodist Committee on Relief (UMCOR) has been in contact with its partners in the region, who report that they have been preparing all week for the powerful storm that is projected to impact Haiti, Cuba, Jamaica, and the Bahamas, as well as the southeastern United States.

Matthew, a category 4 hurricane, hit Haiti on Tuesday morning bringing heavy rains, extreme storm surge, and winds of up to 145 miles per hour. Matthew is the strongest hurricane to strike the country in more than five decades.

Michigan United Methodists with relationships in Haiti are reporting on the damage done to property and lives.

Nichea Guy on Facebook said at noon on Tuesday: “Just heard that Mackendy’s family home was destroyed by Hurricane Matthew. Mackendy lives across from HAPI, in Mizak, Haiti. Please lift them and the many others who are being affected by the storm.”

Haitian Artisans for Peace International (HAPI) also reported on Facebook at mid-day on Tuesday: “The communication was difficult as it is still raining and blowing hard. No one is able to get out to have a full report yet but Paul Prevost knows of at least two homes totally destroyed including the home of HAPI employee, Mario Damis. Many of our volunteers know his family well. They have been moved to the Merlet Center (on HAPI’s campus) for safety. Gardens and livestock–the primary ‘currency’ of a rural community–are always hard hit.”

By 8 pm on October 4 HAPI posted: “Thanks for the continued outpouring of prayers and concern! This afternoon was still too windy to safely be out to assess damage. The physical damage is the ‘tip’ of the iceberg: the economic impact to purchase food, pay tuition, repair homes and seek medical attention is what will be felt for months to come. We are in conversation about crisis intervention measures which will be shared soon; thanks in advance for your support! The areas west of Mizak, extending out the peninsula toward Les Cayes and Jeremie were more severely impacted with flooding and loss of life. The bridge that connects that region of Haiti to PortauPrince was washed away. Reports from friends and family in both Jacmel and PortauPrince were safe and well!”

From Karl Zeigler on Facebook October 5: (Sharon Harbottle in Petion-Ville reporting) “We are now past the worst of the hurricane and have been very fortunate on the Methodist Compound here in PétionVille. The compound was sheltered from the worst of the wind and although there has been very heavy rain we had the roof leaking slightly in only one room. Some branches have come down, but everyone here is safe. We have had no electricity for two days and our inverter has almost run out now, but we anticipate that the offices will reopen tomorrow, and we will then be able to find out what information others have about the situation. Many areas of Port au Prince however have suffered worse, there is extensive flooding and the water pouring out of the mountains is likely to continue to increase for a day or two yet as it is still raining. Roofs have been blown off many homes and many people are in refuge centers. The situation where the center of the hurricane made landfall, a little to the west of Les Cayes, is much worse. A few reports have been received from there indicating the town has had significant flooding, damage to buildings and trees are down. We have not been able to make contact with folk in that area nor in the Jeremie area, and we have now heard that one of the bridges on the main road from Port au Prince to the west has been washed away so there is no road access to the worst hit parts of the southern peninsula.

More from HAPI October 5: (Valerie Mossman-Celestin reporting) “The bridge is out in Ti Goave. That’s big news because it cuts off the west peninsula from the flow of goods from PortauPrince. I expect a lot more reports on damage and loss of life that direction. The hurricane presents a major economic loss in the Mizak community because it wiped out the second planting season and probably killed a lot of livestock. There will be a big surge in illnesses and injuries (people and motos slip in the mud).Family report indicate the storm was not as severe in PortauPrince as they had prepared for. There are some flooded areas in Jacmel from the storm surge.

Earlier this year, UMCOR hosted a regional disaster-response workshop in Grenada for church and humanitarian partners in the Caribbean and Central America, the fifth in a global series. The training focused on disaster preparedness, disaster response, and disaster risk reduction. Of the four countries in Matthew’s path, representatives from three of them attended the February training.

“This training should help our partners be more prepared for disasters such as this,” said the Rev. Jack Amick, senior director of UMCOR Disaster Response.

Laurie Felder, international disaster response program manager, has been in contact with some of those regional partners. She said a pastor in Jamaica reported to her his concern that Matthew’s heavy rains may produce flooding and landslides. He told her he valued UMCOR’s partnership and appreciated the February workshop, as he was now faced with the need to utilize what he’d learned.

In another call last week with a local humanitarian director working in the Bahamas, Felder discussed with him how his organization might be able to draw on its experience to be effective in a disaster response, should the need arise, and helped him prioritize basic needs in an immediate response.

In Haiti, UMCOR’s country office staff closed up the office while the storm rages. They will be monitoring and evaluating needs in Matthew’s aftermath.

He also spoke with UMCOR contacts in Cuba, who told him preparations were under way in Holguin and Santiago de Cuba, both of which were heavily impacted by Superstorm Sandy nearly four years ago.

“After Sandy, we invested in the rebuilding of homes and churches in both of those regions. All were built to new standards to withstand future storms as best could be done,” Forrester said.

“The established churches and, more recently, home churches have become part of the shelter system within their townships and civil defense. Latrines and water systems were added to structural improvements to add shelter capacity. New homes were built with block and concrete, and elevated where necessary to better withstand flooding and storms,” he noted.

“After the hurricane moves through the area,” Amick said, “UMCOR will again consult with our partners to explore strategies for responding to this disaster.”

Please give to UMCOR Advance 982450, which will support relief efforts for Hurricane Matthew.