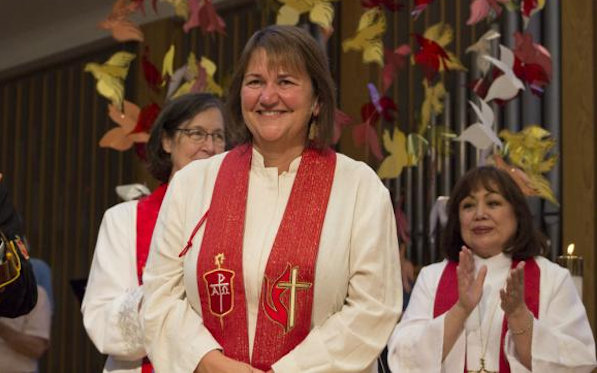 The election of Bishop Karen Oliveto will be on the spring docket of the UMC’s Judicial Council.

A petition requesting a declaratory decision on the election of a lesbian bishop will be considered by the United Methodist Judicial Council next spring.

The petition from the denomination’s South Central Jurisdiction will be part of the council’s Spring 2017 meeting docket, its executive committee decided last week while meeting in Nashville, Tennessee, for orientation. Five new members of the nine-member Judicial Council were elected at General Conference 2016 in May.

Bishop Karen Oliveto, a married lesbian who previously was senior pastor of Glide Memorial Church in San Francisco, was elected and consecrated a United Methodist bishop in July by delegates of the Western Jurisdiction.

The United Methodist Book of Discipline forbids ordaining “self-avowed practicing homosexuals.”Oliveto has been legally married to Robin Ridenour, her long-time partner, for more than two years.

Although the Council of Bishops executive committee had asked the Judicial Council for expedited consideration of the South Central Jurisdiction petition, that request was denied. Because of “the importance of the petition,” the executive committee said, there needs to be enough time for all interested parties “to prayerfully consider” the issues involved.

On Sept. 1, Oliveto will become bishop of the Mountain Sky Area, which includes the Rocky Mountain and Yellowstone conferences.

Dixie Brewster, a delegate from the Great Plains Conference, made the motion for a declaratory decision about Oliveto’s election. The rationale for the motion — adopted by the South Central Jurisdiction during its July meeting in Wichita, Kansas  —  was to help prevent a split in the denomination.

The petition asks the Judicial Council whether “the nomination, election, consecration, and/or assignment as a bishop of The United Methodist Church of a person who claims to be a ‘self-avowed practicing homosexual’ or is a spouse in a same-sex marriage” is lawful under The Book of Discipline.

It also asks whether the public record of a same-sex marriage would disqualify a person from being nominated, elected, consecrated or assigned as bishop or if the action of the jurisdictional conference could be considered “null and void” if that person is “subject to a chargeable offense” under the Book of Discipline.

“Is it lawful for one or more of the bishops of a jurisdiction to consecrate a person as bishop when the bishop-elect is known by public record to be a spouse in a same-sex marriage or civil union?” the petition asks.

Another  question: If conference authorities are made aware that a clergyperson is a spouse in a same-sex marriage or civil union, “does such information in effect and in fact amount to a self-avowal of the practice of homosexuality” as set forth in the Discipline  and related Judicial Council decisions?