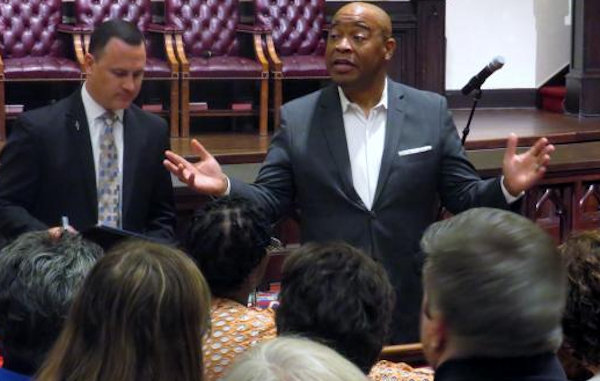 A United Methodist pastor leads a movement to promote dialogue and action after Dallas police shootings.

The Rev. Edlen Cowley’s son, Seth, was one of the United Methodist-supported interns forced to flee a Black Lives Matter rally in Dallas when a man began firing on police.

So it’s personal with Cowley that some good come out of the July 7 tragedy, which claimed the lives of five police officers and the assailant. The shooting traumatized not only the marchers but also the entire city.

Cowley thinks a certain denomination is well-positioned to lead toward healing.

“We can give our kids a better world if we harness our power as United Methodists,” he said.

Cowley, pastor of Fellowship United Methodist Church in Trophy Club, Texas, is the force behind a mustard-seed movement to promote dialogue and action after the Dallas police shootings.

That downtown church is a few blocks from where the shootings occurred.

“It’s like we’ve returned to the scene of the crime — to redeem this place,” Cowley told the crowd.

Cowley and Wil Murphy, media consultant for the North Texas Conference, assembled a panel to steer discussion about how United Methodists should respond to the shootings.

The panel included the Rev. Michael Bowie, pastor of St. Luke Community United Methodist Church in Dallas. His daughter Lauren, like Seth Cowley, was among the Project Transformation interns who fled the Black Lives Matter rally when the shooting began.

Bowie told the crowd that he had concerns about her going, but also felt proud that she would want to be part of a social protest. She gave upbeat FaceTime reports from the rally, but about 9 p.m. sent one that there was shooting going on.

“I went from proud to paralyzed,” Bowie said.

Other United Methodists directly involved included Rhetta Andrews Bowers, who attended the rally with her two children, and the Rev. Doris Smith, a part-time local pastor and Dallas police detective who responded along with other officers.

Though all would ultimately escape physical harm, the meeting included testimonies from some, such as Bowers, to the roiling emotions they’re still feeling.

Bowie said African-American congregations, such as his own, have been too timid about addressing mental health care as a need within the church and the broader population.

He said pastors need to speak out about mental health, and offered that he himself sees a therapist monthly.

“You’re crazy if you don’t go,” he said, prompting laughter and applause.

Meeting participants, including North Texas Conference lay leader Jeff Bouis, wrestled with the challenge of supporting law enforcement while also speaking out about police misconduct against people of color.

The Rev. Pablo Guardiola, pastor at Cockrell Hill United Methodist Church in Dallas, told of police stopping him as he did a prayer walk in the church parking lot.

His protestations that he, a Hispanic man, was the pastor of the church went unbelieved until he showed his business card.

“Thank God for the Cross and Flame,” Guardiola said. “I was a card-carrying Methodist that day.”

He added: “If this is the treatment I get, I can’t imagine what it’s like for my (African-American) brothers.”

But the dangers faced by police also were a major part of the discussion, and the offering taken at the close of the meeting went to family members of the slain officers.

Cowley and Murphy collected email addresses of those who attended, and plan to announce more meetings in different church locations, with the ultimate goal of an action plan in the four areas of concern.

In spreading the word, they’ve used the social media hashtag #transformationbegins, which echoes both Project Transformation and the United Methodist mission statement “making disciples of Jesus Christ for the transformation of the world.”

“I wish we were handing off a better world to our kids.”

Cowley is in a cross-cultural appointment, leading an overwhelmingly white congregation. He said he and son Seth were at a service at the church the night after the shootings, and congregation members went out of their way to show Seth support.

Church member Bruce Morey told the pastor, “Edlen, I wish we were handing off a better world to our kids.”

That remark inspired Cowley to start what he hopes will be a long-term effort involving many United Methodists across North Texas and even beyond.