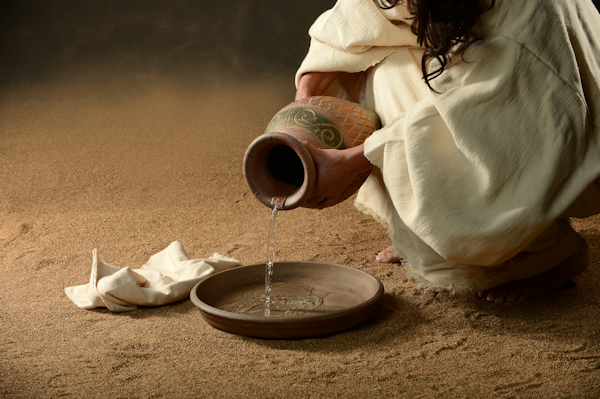 Christ’s holy touch reaches from Brussels to the U.S. with healing and hope for all peoples.

‘She slipped in from behind and touched the edge of Jesus’ robe.  … Jesus said “Who touched me? … Someone touched me.  I felt power discharging from me.”’   Luke 8:44-46, The Message

Holy Week gives us such poignant and contrasting images of the power of touch.  The gentleness and humility of Jesus wrapping a towel around his waist so that he may wash the feet of his disciples stands in sharp contrast to the government-sanctioned violent forms of touch used in the beating and crucifixion of Jesus and those crucified with him.  As I write this reflection I am mindful of the ideologically-driven violent explosions that just took place this morning in Brussels.  The tragic loss of life and injury to so many was contrasted by the story of one of the airport workers that immediately began to pull people from underneath the rubble, using his touch to try to save life and bring healing.

On Palm/Passion Sunday evening Ruth and I decided to stay in the spiritual theme of the day by watching an old classic Hollywood version of discovering faith in Jesus of Nazareth.  The film was Ben Hur.  I know it is far from being a biblically-based film, and has way too much male violence taking place, yet there are some moments that convey the essential human and spiritual nature of healing touch in the midst of individual and systemic oppression.  Like Holy Week scripture readings, the film is a study in contrasts.

I had not watched this film in years, and found myself being drawn to some scenes that had not stood out to me in the past.  One moment that particularly grabbed me was just after Ben Hur had been arrested and falsely charged for injuring the Roman Governor.  He was being marched along with others to become a rowing slave on Roman war ships.  They stopped in a small village for the soldiers and horses to get water.  The parched Ben Hur tried to get a drink and was knocked to the ground by a Roman guard.  The touch of violence seeks to intimidate and dehumanize, preventing life from thriving.  Such a touch leaves a parched soul, not just parched lips.  In that moment a man from the village, a carpenter by trade, kneels down and gently washes the parched prisoner’s face and lifts his face so that he may drink.  A healing touch restored a glimmer of hope to a broken life.  We never see the gentle carpenter’s face, yet we know that Hollywood is giving us a short glimpse of Jesus who will become the Christ.

The scripture passage from Luke 8 is not a part of Holy Week readings, yet it so vibrantly conveys the deep need of humanity for a healing touch, and the very essence of what Jesus was all about—the healing of a world that so often is out of balance.  This healing of a woman from over a decade of hemorrhaging is not simply about physical wellness.  It was also an act of restoring her to social relationships in the midst of oppressive cultural and religious norms related to women.  The Message has Jesus saying, “Daughter, you took a risk trusting me, and now you’re healed and whole.  Live well, live blessed!”   The study notes in The Wesley Study Bible remind us that “The two who are healed in this account were hon the margins of Jewish society in the first century.”  Jesus’ healing touch is revealed in direct contrast to political and cultural norms that seek to intimidate or dehumanize individuals and groups of people.

It is much easier for us to restrict the Gospel healing message to individual accounts, and so much harder for us to understand and accept the corporate and systemic nature of what needs to be healed.  The words of For the Healing of the Nations [#428, The United Methodist Hymnal] can be very invasive if we strategize on how to make them real:

For the healing of the nations, Lord, we pray with one accord;

For a just and equal sharing of the things that earth affords;

To a life of love in action help us rise and pledge our word,

Help us rise and pledge our word.

I share all of this as the preface to inviting you to consider what it may really mean for the United Methodist Church, including every annual conference, to participate in an Act of Repentance Toward Reconciliation with Indigenous Peoples.  I am especially appealing to the clergy and lay members of the Detroit and West Michigan Annual Conferences.  The Council of Bishops, in their statement at the 2012 General Conference, stated:

It is time for our generation to free captive Native and indigenous peoples from institutional church oppression and learn from them spiritual values that will see us through our own current spiritual emergencies, save our embattled earth, and enable humankind to live as one with creation and all living creatures, including ourselves.  The question is whether the church is strong enough to bring about change in the United States and around the world where indigenous peoples have been decimated, assimilated, abused, left victims of dominant Western economies and the imposition of oppressive materialistic cultural values.  Our work in healing broken relationships must be specific, actionable and accountable.  Morally, it must be part of our denomination’s discourse, programming and policies.

Thom White Wolf Fassett writes in his essay “Restoration and Reconciliation—Restoring Truth in a Time of Repentance”:

“Perhaps the core of repentance begins with a declaration that the church cannot yield to historical amnesia.  Instead, the church must turn and return to God and Native peoples, in order to repent of its folly and petition for forgiveness.  In receiving a new heart and a new spirit, Christians and the church might then resolve to cease the harm, live differently, and reverse the damage that has been done through their participation in violence against and maltreatment and neglect of Native peoples.  In this way, the church—together with God and Native peoples—may bring to reality the healing and restoration of all peoples and the earth.”   [found in Coming Full Circle: Constructing Native Christian Theology, p. 78]

You and I have an opportunity to prepare our minds, hearts and souls to see our history and our future through a new lens.  Beginning on April 9th there will be a series of showings of the documentary film Our Fires Still Burn: The Native American Experience.  You can begin to learn more about the current Native American tribes and bands here in Michigan, the historical actions which created the largest genocide in recorded history, as well as the positive cultural influences that Native peoples have given to the wider world   [ http://2016.michiganumc.org/programs/first-steps/  ].  By preparing ourselves we will more fully be ready for God to invite us to take the first step on this journey.  Take a risk so that the beginning of healing may come to the nations.