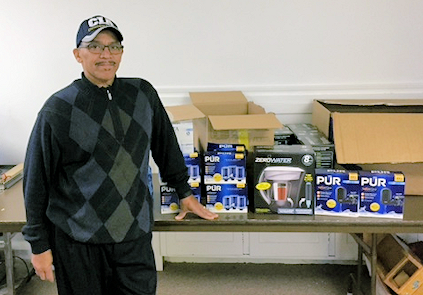 Two months before the water crisis in Flint reached the international headlines, Peter Plum was hired by the Crossroads District of The United Methodist Church to meet the needs of thirsty neighbors.

“The pastors in Flint got together last fall,” Peter explains, “convinced it was time to offer people whatever relief was possible.” Out of that expression of concern, the Crossroads District of The Detroit Conference decided to hire an Emergency Water Crisis Coordinator. By mid-November Peter, a lay member of Seymour Lake United Methodist Church, set to work.

At the same time Flint had just returned to the Detroit water loop. Peter remembers thinking, “Things will be OK now.” But soon everyone learned that permanent damage to the city’s infrastructure had already been done. “At that point it didn’t matter whether water was coming from Detroit or the Colorado Rockies,” Peter notes.

Peter’s initial task was to come up with a plan for the establishment and equipping of resource centers around the city. From the outset Peter’s focus was water filtration. “I was not crazy about bottled water,” he says. “All the fire departments have the capacity to manage bulk quantities of bottled water.”

Peter applied for a grant from the United Methodist Committee on Relief (UMCOR) and the grant was quickly approved. “That got us off the ground,” he remarks, “purchasing filtration systems and replacement filters.”

Materials were moved to eight churches (sites listed here) and signs were placed on the street to alert the public that these were places to receive clean water and lots of hospitality. From the beginning those who have come through the doors of the Resource Centers have gotten what they need with only minimal red tape. “We simply report addresses the people volunteer to give us in order to aid government agencies in tracking the penetration of relief,” Peter says.

Conversations continue with UMCOR regarding additional funding. And in the short-term it is dollars that are especially needed. “Crossroads District needs money to replenish the filters,” Peter explains. “The most flexible donation any person or church can make right now is money.” While people are eager to volunteer, right now the Resource Centers are being effectively staffed by the host churches.

“I am asking people to be patient,” he adds. “I know people want to buy stuff and actively participate. I don’t discourage that but I can buy lots of filters for the gas money it takes to truck loads of bottles to Flint.”

The item Peter is most eager to receive is Zero Water Pitchers (shown above). These are more effective in removing contaminants than other filtration systems, including lead. “We are giving the pitchers to people living in older homes whose faucets will not accommodate a filter,” Peter notes.

“God is bigger than this problem and God will get us through.”

So is Peter just sitting at a desk ordering supplies and managing distribution all day? No. “My pick-up is always loaded with supplies and I make the deliveries myself,” he reports. “I have lots of wonderful people helping and I am overwhelmed by the generosity being shown. But I am usually running around like a one-man-band.” Water-testing kits will soon be added to his cargo.

Peter’s business background in marketing, support services and mobilization prepared him well for the groundwork and public relations required for this task. “But it’s really been learn as we go,” he confesses. “I would never have seen myself in a role like this.” But that’s where Peter’s faith background kicks in. “I really give Jesus credit,” he says. “He is good and makes me good. This project is so much bigger than me.”

Admittedly, there is no end-game. “Crossroads District plans to be up and running for as long as it takes,” Peter says. “Until a solution is found, the Resource Centers are staying open.” While he recognizes the important political aspects of the catastrophe at hand, Peter’s passion and role is not political engagement.

Everyday Peter meets people who are without hope. “The residents of Flint do not see any light at the end of the tunnel. We know filters and bottled water are band aids.” But people need to bathe. And people need to drink. While others work on long-term solutions that address the big plumbing picture, Peter is committed to the job at hand… offering the compassion of Jesus Christ. “Seems bleak,” he remarks, “but God is bigger than this problem and God will get us through.”

Those wishing to contact Peter Plum may do so at [email protected]. He welcomes partners in the immediate effort of “connecting with people and organizations that can help our neighbors and the community of Flint.”