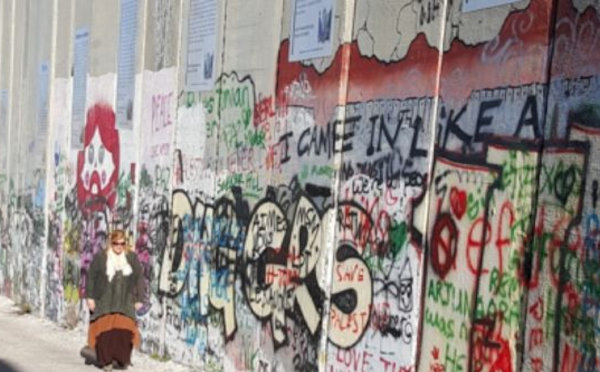 Janet Lahr Lewis reflects on her years spent as a United Methodist missionary in Israel and Palestine.

JANET LAHR LEWIS
General Board of Church and Society

In 1994, I began working in a Palestinian village in the Lower Galilee region of Israel. It was only about a year after the now infamous “Oslo Agreement” was signed – when hopes were high with the anticipation that peace between Palestinians and Israelis would be accomplished in only a couple more years. Tens of thousands of tourists who had avoided traveling to the region, considering it too risky, began flooding into the country. It was a time of optimism and confidence in a better future.

After three quiet years in Galilee, I felt called to move to Bethlehem in the West Bank: just six short miles from the Old City of Jerusalem where my office would be. As part of the Oslo Agreement, the West Bank had been divided into Areas A, B and C: Area A under full Palestinian authority, both civil and security, Area B under Palestinian civil authority but Israeli security, and Area C (comprising over 75% of the West Bank) under full Israeli control.

We were excited when Bethlehem was one of the first cities to be turned over to the Palestinian Authority. The day it happened, just before Christmas, the once-quiet streets that had been patrolled by the well-armed Israel Defense Forces (IDF) were suddenly crowded with people playing music, dancing in the streets, and waving huge Palestinian flags that had been illegal to display prior.

That Christmas Eve, Manger Square was packed with Palestinians for the first time in decades. I met a 27 year old man who told me that he was a Christian born and raised in Bethlehem, and it was the first time he had ever been allowed to celebrate Christmas Eve on Manger Square. In previous years, the IDF had allowed only internationals or Israelis to enjoy the festivities. But on that day, a sense of hope and anticipation of freedom and a better life prevailed in the celebrations. Perhaps that Christmas, as we celebrated the birth of Christ, we would also bring about the birth of a nation.

By the time I moved back to the U.S. in 2014, Bethlehem had become an open air prison surrounded by a 28 foot concrete wall, receiving water from the Israelis only twice a month at three times the price Israelis pay, and with only one way in or out for the Palestinians who are lucky enough to get a military permit.

Gone were the days when we used to make the 20-minute drive through Jerusalem to enjoy an evening out in Ramallah. Gone were the days when we could jump in a public transport van at the main intersection in Bethlehem and be at work in Jerusalem a half hour later. For Palestinians the trip to Ramallah now takes an hour and a half on a winding, treacherous road through Wadi Nar (the Valley of Fire), assuming that you are not held up at one of the three major checkpoints along the way.

West Bank Palestinians are no longer allowed to pass through the heart of their beloved city of Jerusalem, the city they call simply Al Quds: “The Holy.” No longer are they allowed to go to pray at the Church of the Holy Sepulcher or at Al Aqsa Mosque when they wish. No longer can they visit their family members or even go to the hospital without a permit issued at the whim of the IDF.

According to the Oslo agreements, Bethlehem is supposed to be under the full control of the Palestinian Authority. However, for many years, closures and curfews became the norm. “Closure” means that no one is allowed in or out of Bethlehem; that includes trucks bringing basic food supplies for the shops, gasoline for pumping stations, even medicine for the clinics. I remember going to five different shops before I was able to find one small box of milk. The water that is controlled by Israel was routinely cut off, sometimes for several weeks at a time.

As an international I was sometimes able to get through the checkpoint even under closure. I carried two empty two-liter bottles in my backpack to fill with water at the office in Jerusalem and bring back to my home in Bethlehem so that I could have something with which to brush my teeth and flush the toilet. One liter was for me while the other I gave to my neighbors who were not as fortunate enough to have access to something that should be a basic human right for all people. No one should be denied water for political reasons.

Closure was not as bad as Curfew, when no one was allowed out of their homes, not even on their balconies, for days and sometimes weeks. As a safety measure one winter, the Bethlehem Municipality would turn off all the electricity in town at 4:30 in the afternoon. This meant that no one could turn a light on in their home and therefore become a target for the Israeli snipers who regularly shot at shadows passing by the windows killing many who were unlucky enough to become visible in their scopes. For many nights I slept in the hallway between two concrete walls when the bullets would fly past my bedroom windows. I learned to rub my face with a lemon to cut the effects of the teargas.

Unconsciously I went into “self-preservation mode” knowing instinctively when to stay low and away from doors and windows, when it was safe to go out on the street or not, and when to hide under the stairwell to try to protect myself from the tank shellfire and missiles from the Apache helicopters that were a constant threat overhead. I learned to tell the difference between the sounds of the various explosives going off in Bethlehem vs. the sound of fireworks at some celebration in nearby Israeli West Jerusalem.

It is quieter in Bethlehem now. It is locked up tight. There is no need for the tanks, although soldiers shooting to kill are still all too frequent.

It is now 50 years since the occupation of the West Bank and East Jerusalem began. Gaza is completely surrounded and has become the largest open-air prison in the world locking in almost two million people. The occupation controls every aspect of people’s lives; every right, every move, even every thought. The hope for peace that the Oslo Agreement instilled has long ago been squelched and replaced by hopelessness or desperation.

But there is one thing that has not been squelched. In Arabic we call it “samud.”* Steadfastness. Despite the imbalance of power, the Palestinian people continue to hold out for their basic human rights, to enjoy even the most basic of freedoms. They are still stuck on Good Friday, but they know that the Day of the Resurrection is coming when all will be restored, and justice and peace will come to all the people of the land: Israelis and Palestinians.