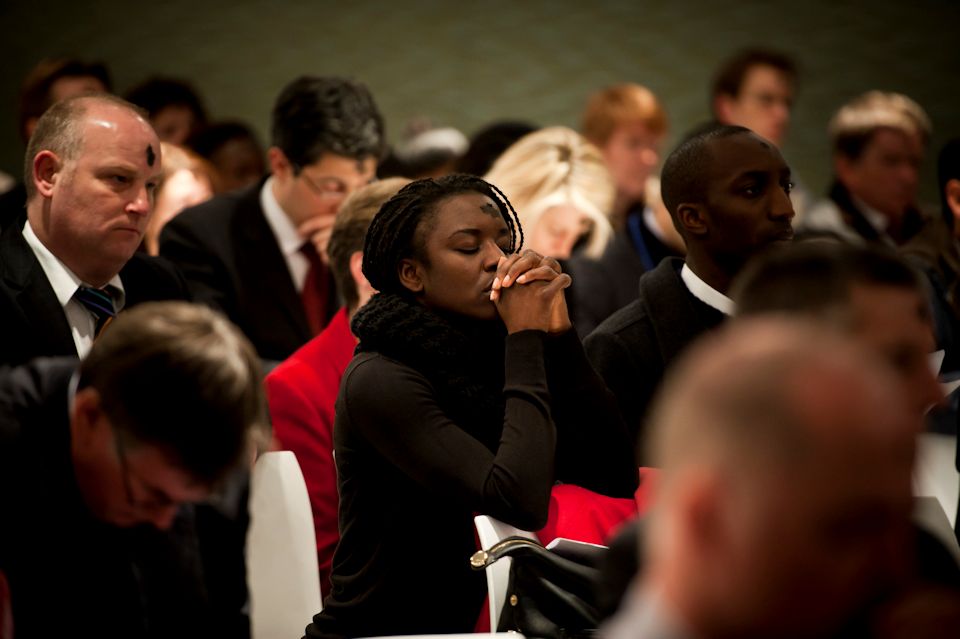 On Ash Wednesday pastors dip their thumbs into a bowl of ashes and draw a cross on worshipers’ foreheads. The practice is ancient. Learn why ashes connect people with God.

One Wednesday a year, sometime in February or March, you notice someone at work, school, or elsewhere with a smudge on her forehead. It looks as if she missed a spot when washing. Then you see another who looks as though he needs to glance in the mirror. By the time you see the third, you realize it is Ash Wednesday and these passersby must have received the imposition of ashes.

This practice we use to mark the first day of Lent may seem odd. People go to church mid-week to have a cleric place dirt on their foreheads.

In the early days of the church, it was even more dramatic. Pastors did not dip their thumbs into the ashes to draw the shape of a cross on your forehead. Instead, they poured or sprinkled ashes over your head.

Under any other circumstances, most would run from ashes. We avoid cleaning fireplaces for fear of the filth from them, yet we participate in this practice that is growing in popularity. In fact, the receiving of ashes seems to connect with all sorts of people.

Several United Methodist pastors take their vials of ashes to the street Ash Wednesday, to meet people where they are.

In Clearwater, Florida, the Rev. Emily Oliver of Skycrest United Methodist Church applied ashes to the foreheads of those who drove into the church parking lot on the morning of the first day of Lent.

In Albuquerque, New Mexico, the Rev. Kim Kinsey spent much of her day on the busy sidewalk in front of Christ United Methodist Church with her pyxis of ashes. The previous year she made the sign of the cross on the forehead of one she describes as “tattooed head to foot,” and adults from a nearby housing complex for those with developmental disabilities.

The Rev. Peter McNabb of Wheatland United Methodist Church offered them outside a Dallas Area Rapid Transit train and bus station. McNabb sees this as a way of living into “our Wesleyan tradition: to literally take the ashes to the streets.”

In “A Service for Worship for Ash Wednesday” in the United Methodist Book of Worship, two suggestions of what worship leaders may say as they make the sign of the cross on another’s forehead are offered: “Remember that you are dust, and to dust you shall return,” and “Repent, and believe the gospel.” Each points to an aspect of what the ashes represent.

Remember that you are dust…

Ashes were an ancient symbol of our humanity. In Genesis, we read that God formed human beings out of the dust of the earth (Genesis 2:7). The Hebrew word translated dust, is occasionally translated ashes elsewhere.

When Abraham felt the need to acknowledge the difference between him, a human being, and the infinite God, he referred to himself as dust and ashes. “Let me take it upon myself to speak to the Lord,” he said, “I who am but dust and ashes” (Genesis 18:27).

…and to dust you shall return

Our humanity also calls to mind our mortality.

After expulsion from the Garden of Eden, the first human beings are told by God, “you are dust, and to dust you shall return” (Genesis 3:19 NRSV). We know the day is coming for each of us when we will return to dust.

We wear black as a sign of mourning. Ancient people wore ashes. For example, Mordecai puts on sackcloth and ashes to grieve the many deaths he sees coming from an order King Ahasuerus gives to kill all Jewish people (Esther 4:1-3). The prophet Jeremiah later calls the people of God to “roll in ashes” as a way of mourning the coming devastation from an opposing army (Jeremiah 6:26).

Receiving the imposition of ashes is a powerful way to confront our humanity and mortality. They remind us that we are not God, but God’s good creation. In them we recognize that our bodies will not last forever, and come face-to-face with the reality of our eventual death.