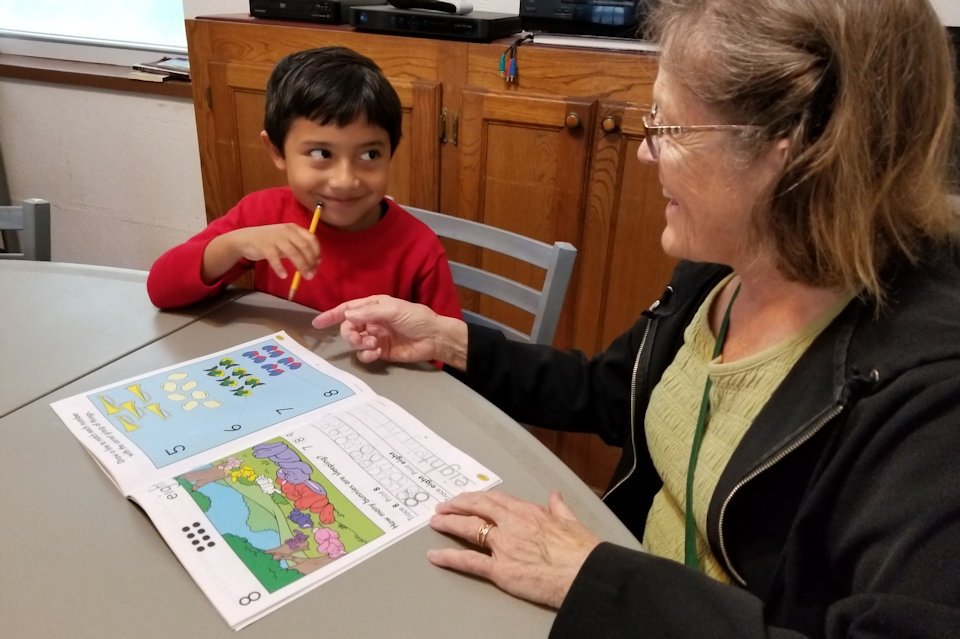 The United Methodist Women first set her on a course of volunteer mission. Now in retirement, this Traverse City resident, Randie Clawson, has made caring for refugees her life’s work.

Randie Clawson took her first overseas trip after she turned 70 years young. And she found her life’s passion – helping refugees.

“I heard a sermon from Dianne Doten Morrison, a United Methodist pastor, who asked ‘If you could do anything, what would you do?’” Randie said. “My answer was ‘serve in missions.’ And that was the start.

“I love the theology that we are on a journey together, and God is bringing things into our circumstances that allow us to become what God wants us to be. That’s an ongoing gladness in my heart. My life is changed every time I say ‘yes’ to something else that God is calling me to.”

In 2012, Randie, a retired laywoman based in Traverse City, wanted to become a peacemaker and especially was drawn to the conflicts in Palestine and Israel. Before heading out on her own volunteer work, she joined a two-week United Methodist Women Ubuntu journey to Sierra Leone.

“We toured the country and saw the wonderful ways UMW had changed the world through their gifts in Sierra Leone. It was so eye-opening for me,” she said.

Through making connection after connection during the next six years, Randie served three separate missions in Bethlehem as well as three months as a teacher’s assistant at a school for Syrian refugee children in Jordan, two months with a United Methodist missionary in Jerusalem and a session in Virginia with a Church World Service refugee resettlement office. Many of her tasks have been working with refugee children, but she’s also been involved with serving food, clearing land and transporting supplies and people.

“In 1983, in my job with the Secretary of State’s office, I gave road tests to prospective drivers,” Randie said. “And then 30-some years later in Virginia, I found myself helping refugees learn about the driving laws in the U.S. How God had used that earlier situation in my life to help all these years later. God is in us and is putting us in circumstances where we can flourish.”

Interestingly, 76-year-old Randie now has attended United Methodist Women national assemblies and jurisdictional conferences and has served as the conference UMW Social Action chair, all while never attending a local church with a UMW unit. Though a member of Grawn UMC, she became an affiliate UMW member of the Traverse City Central Lunch Bunch unit. Recently she also has been the Northern Waters District Peace with Justice coordinator, a role she believes she still is learning.

Four years ago, Randie was looking for a winter service opportunity and UMW connected again. “I was speaking with one of the women from my Ubuntu journey and shared that I was looking for a place to serve refugees in a warm climate,” Randie recalled. “She introduced me to a United Methodist deaconess, Cindy Johnson, who works out of Brownsville, Texas. So for the last three winters, I’ve been serving at La Posada, a shelter for asylum seekers and refugees in south Texas. Again, it is a UMW connection that has connected me with opportunities for service. UMW connects women with meaningful service in our country and around the world.”

A life-long learner, Randie continues to read and take courses. One author she recently found was Old Testament scholar Walter Brueggemann. After reading a couple of his books, Randie learned that he had retired to Traverse City and joined T.C Central UMC. “I was fortunate to be able to participate in an eight-week study he conducted. It was an answer to prayer that I didn’t pray,” she said.

Randie says she continues to learn from the people she helps. “I’ve learned more listening skills and I’ve seen the good of humanity from people of all faiths as they help the refugees.”

But she’s also seen and felt a lot of pain.

“Realizing that my country was complicit in each bomb and bullet maiming their children and yet the mothers in Palestine were still gracious to me,” Randie said.

“I’ve seen and experienced a lot of injustice,” she said. “In Palestine, knowing what it is like to run out of water, and the unpleasant things we needed to do to save water. All the while on the other side of the illegal wall on Palestinian property, water was plentiful, lawns were watered and swimming pools filled — living lush and green. We need to call out injustice where we see it.”

While seeing so much poverty and struggle as she volunteers, Randie finds inspiration from scripture. “What is the story Jesus taught us on the Mount? What did Jesus call us to do? How are we standing up to that? What is our life’s narrative? We will need to answer to what we say and do. Everything matters to God. That’s what keeps me going.”

At one of the UMW national gatherings Randie attended, she says she was changed forever. “The theme was Jesus, Justice, and Joy. And I’ve now adopted that theme for my life. Going forward, my plan is to work for justice for all, even if our church is in flux right now. I want to love people on all sides of issues and show how people can work for the bigger picture of living God’s love to all.

“God and I are still in dialog about my life. But I’ve been fixed in ways I didn’t know I was broken,” she said. “Jesus, justice, and joy!”

~ You can volunteer, too.  Click here to find opportunities as a Mission Volunteer with the General Board of Global Ministries.