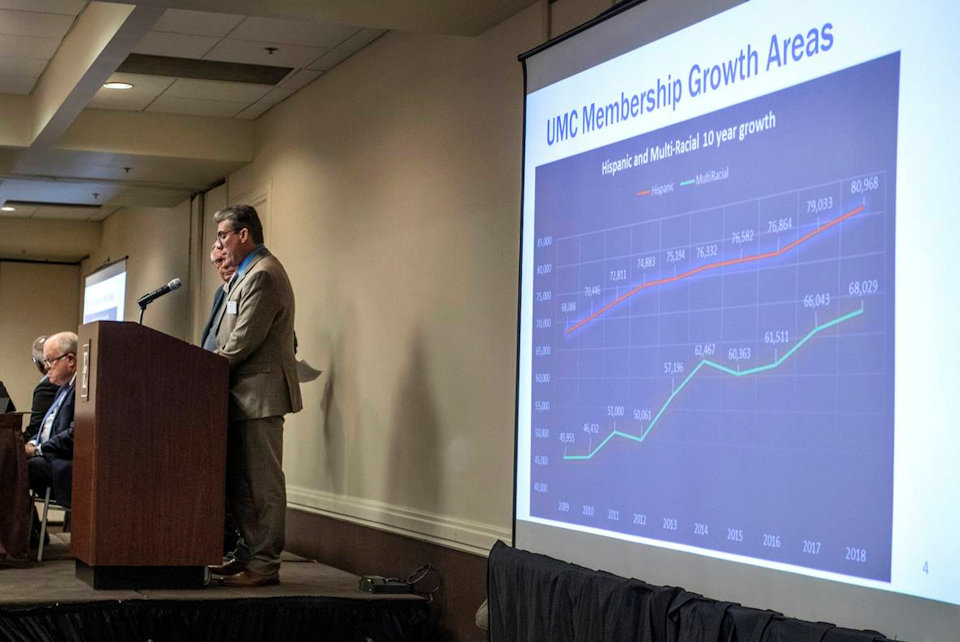 Kevin Dunn presents an overview of U.S. United Methodist membership data to the General Council on Finance and Administration board during its Nov. 15 meeting in Nashville, Tenn. He is the agency’s director of data services. Among the bright spots he pointed to was the church’s growth in Hispanic and multiracial members.~ UMNews/Kathleen Barry

The U.S.’s majority status in The United Methodist Church is coming to an end — and may be there already.

That’s according to projections from the denomination’s General Council on Finance and Administration — based on the continuing decline in U.S. membership as much as growth in Africa.

According to the agency’s forecast, total membership in the central conferences — church regions in Africa, the Philippines, and Europe — will exceed that of the U.S. jurisdictions in 2020.

“Based on trends that have occurred over the last several years, we are annually averaging a decline of 2.0% overall for the jurisdictional membership,” Kevin Dunn, the agency’s director of data services, told the GCFA board at its November meeting.

It’s a significant development for a church whose governance and history have both helped shape and been shaped by the United States, where the denomination got its start in 1784.

However, starting in 2014, he said, the overall drop has exceeded the number of funerals. U.S. worship attendance also has been shrinking as a percentage of overall membership for the past decade.

Dunn noted that United Methodist numbers are in keeping with overall U.S. religious trends. In October, Pew Research Center reported losses across Christian groups while showing the religiously unaffiliated rising to more than a quarter of U.S. adults.

Even with shrinking U.S. rolls, The United Methodist Church is still the country’s third largest denomination — behind the Catholic Church and Southern Baptist Convention.

The most recent data GCFA actually has on hand is the U.S. membership and attendance figures for 2018. Unequal infrastructure and technology typically mean that membership reports are usually out of sync between the U.S. and the rest of the globe.

However, the central conference total comes with an asterisk. On its data services website, GCFA notes that the 2017 numbers reflect the most recent submitted. Where conferences have not reported any new data, the agency carries over numbers from previous reporting.

The story of the church in the U.S. is not strictly one of decline.

“We have some good news,” Dunn said. “Our Hispanic and multiracial growth has consistently been trending upwards 2% to 3% (a year) in each category.”

The predominantly Hispanic Christ’s Foundry Fellowship in Dallas is an example of that growth. The North Texas Conference decided more than 10 years ago to plant a congregation in a growing Latino neighborhood.

The congregation that began as a small group worshipping in various locations has grown to 166 members and 228 in average weekly attendance.

The Rev. Lucia “Lucy” French, the congregation’s associate pastor, attributed the congregation’s growth to several programs the church instituted early on. These include small groups, a worker association to help people find employment and Family Wednesday — Miercoles de Familias — a time for children’s choir, youth group, parenting classes, and marriage instruction. French, who came to Dallas from Quito, Ecuador in 2006, found her calling as a pastor by leading the Wednesday night programs.

“Everything that has happened in the growth and development at Christ’s Foundry has been the result of many collaborators, each bringing their unique strengths, resources, talents, and dedication to the effort,” she said, with interpretation from her husband, John.

Christ’s Foundry, which now has a building to call its own, is also now taking a lead role in the North Texas Conference’s response to recent tornadoes that wreaked havoc on the city.

“The congregation of Christ’s Foundry has been and continues to be blessed by the community, and has shown its ability and willingness to be a blessing to others in the community by living their faith,” the pastor said. “While headcounts and budgets have their place, this is the best measure of success.”

North Texas Conference’s Bishop Michael McKee also is the president of the GCFA board. He told the board that while worship attendance is very important, it offers an incomplete picture of what’s happening at many United Methodist congregations such as faith formation and mission activities.

“This is not an argument with the statistics at all,” he said. “It’s just an acknowledgment that we have to think about these things in some other ways because we may have more people engaged than our worship numbers show.”