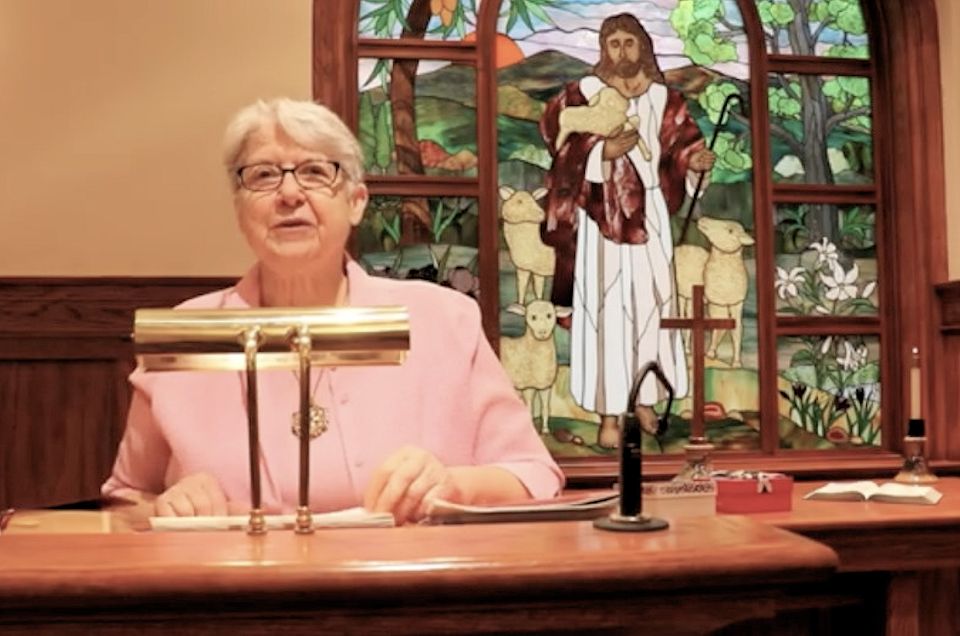 Women of the district and conference UMW connected through ZOOM in 2020 to get their annual celebrations and business done.

How do you conduct essential business and provide needed information and encouragement to a group of women when you can’t meet in person? Well, you embrace technology and try to find a way to connect as many persons as possible through ZOOM! Diana Miller, the webmaster of the Michigan Conference United Methodist Women and ZOOM guru, explains how it happened.

“When the Conference United Methodist Women used the Zoom platform for the Leadership Team meeting last January, they had no idea where it would take them in the months ahead. In March a district UMW team raised the possibility of Michigan UMW getting a license for the conference and district teams to use. It was agreed that a Zoom license be purchased. They were off and running.

At first, only the conference went online. Then a few districts began to schedule their Leadership Team meetings. Next, a few smaller committees met using Zoom. As time passed and the COVID protocols continued, leaders realized they might have to use the Zoom platform for the upcoming fall annual meetings that included voting on important business.

Dr. Muriel V. Nelson, the Liberia United Methodist Women president, attended two district events and the conference events. She was in this country, visiting her family.

Videos of the speakers, meetings, and mission updates are on the Michigan Conference United Methodist Women’s website.

The Second Annual Celebration was a joy to watch. WalthaGaye Leavitt welcomed participants, and Ruth Jones shared a devotion. Greetings were offered by Bishop David Bard, executive director of National UMW Harriett Jane Olsen, and conference President Linda Darrow. We were reminded that it is truly a  joy to give to Missions supporting women, children, and youth across the spectrum. And give we did. A total of $3,002 was raised for three causes – $1,226 for Our Pledge to Mission, $1,226 for the United Methodist Community House (Michigan’s own National Mission Institution), and $550 for the Legacy Fund.

We listened to Assistant Dean and Professor Tracey Weaver Brame from Cooley Law School speaking of the “School to Prison Pipeline: Rethinking the Approach.”

WalthaGaye Leavitt’s summarized Brame’s address. “Tracey Weaver Brame has worked in many arenas and in many cities with many people of different economic and educational levels. She is currently an Assistant Dean and Professor at Cooley Law School in Grand Rapids and runs the West Michigan Public Defender Clinic.

Brame reminded us that slavery is often thought of as an ancient wrong with little relevance to today. But the foundation was set and oppression continues in many forms today. Laws have evolved, but social impact has not. The historical views and systems directly impact the African-American population today. Black veterans don’t receive the same benefits as whites. Children of color often live in poorer communities with substandard schools. They don’t have good role models and are surrounded by gangs and turmoil. African-American boys look older, so they are treated as such, Brame observed. Consequently, they are expelled faster. During this forced leave from school, they often get involved in “pranks,” which gets them into the judicial court system. Black persons are given tougher court sentences than white persons, further breaking down their self-esteem. If treated like a criminal, some think, “why not be a criminal …I won’t amount to anything anyway.”

Brame listed things that can be done to decrease the number of students in the pipeline. First-time offenders are suspended at rates that are double the suspension rates of whites. First, we need to check our own biases and encourage conversations for others to do the same. Second, we need to support innovative efforts to provide safe, positive, engaging, empowering educational environments for ALL young people. Third, we need to rethink how we look at school discipline and the efficacy of removing children from learning environments as punishments. And last, we need to remind African-American youth that they have the same rights and to make sure they do.”

The budget for 2021 was passed with an amount of $149,700. A new slate of officers was elected, and we approved changes to the standing rules. We installed the newly elected team (conducted by Suzanne Hewitt, immediate past member of the National Program Advisory Group). We said goodbye to outgoing team members Kathy Freeland, Brenda Street, Alice Tucker, Beth Mitchell, and Linda Darrow.

Simmie Proctor and Jackie Euper, co-deans of Mission u for 2020, gave reports along with greetings from Nichea VerVeer Guy, who stepped up to fill a vacancy for next year. Even though there were no in-person Mission u sessions this year, “Finding Peace in an Anxious World” was available as a video study. Linda Schramm shared news about Legacy Builders, and we enjoyed a wonderful Time of Remembrance thanks to Cindy Thiele, Membership Nurture and Outreach coordinator.

In closing, Beth Mitchell invited all of us to come to Westwood UMC in Kalamazoo next year for a “physical” gathering of all United Methodist Women. We closed with prayer from WalthaGaye Leavitt.