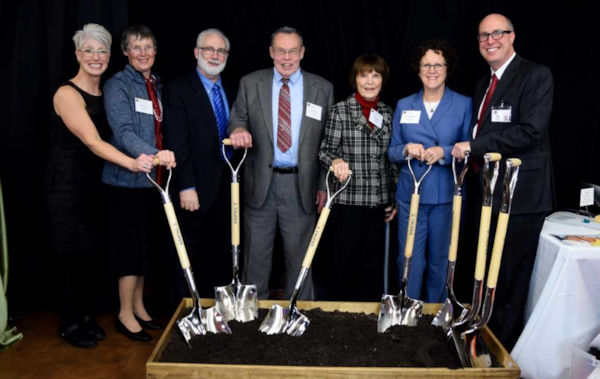 UMRC Foundation President Wendy Brightman also announced an anonymous gift of $1.5 million at the Groundbreaking Event that will match dollar for dollar any gifts specifically for these capital projects. “On behalf of the UMRC Foundation, I am honored to receive this gift that will transform care for the older adults we serve and help us reach our fundraising goal.”

Support for UMRC is personal for the families of Cynthia Kresge, member of The Kresge Foundation Board of Trustees and granddaughter of Dorothy McVittie Kresge for whom UMRC’s Kresge Center is named; and Howdy Holmes, President/CEO of Chelsea Milling Company. Each spoke at the event. Cynthia’s grandmother, Dorothy McVittie Kresge, served on UMRC’s Board of Trustees and led the efforts as chair of the campaign in 1985 to create the Kresge Center. “There are hundreds of buildings across the U.S. that bear the Kresge name,” said Cynthia. “But UMRC’s Kresge Center is the only one I know of that is named for my grandmother.”

“Members of my family have been cared for by this organization when they needed support,” Howdy Holmes shared. “I am so proud that this important organization is serving older adults within our community.”

Campaign Co-Chair Lisa Herrick spoke about the growing population of older adults, expected to triple by 2030 for those over 85, while very few foundations nationwide have made caring for older adults a priority. “At a time when it seems like no one is paying attention to the needs of aging in America, we can congratulate the UMRC Foundation for receiving six of the ten largest gifts given to the aging sector in the last ten years,” said Lisa. “UMRC has a national presence and has the ability to make a big difference in the field of aging. This campaign allows UMRC to continue its momentum.”

Marilyn Campbell, a Kresge Center resident, shared her gratitude to those at the event for supporting this project. “I can’t begin to tell you what this means to me. Thank you so much for building my new Kresge Center home!”