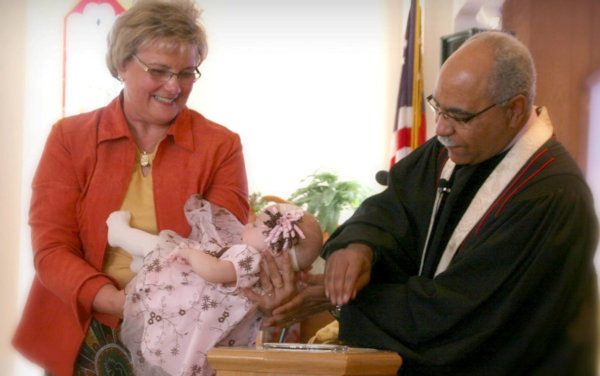 Margie Briggs and the Rev. Cody Collier baptize a child during a worship service. ~ photo courtesy of Margie Briggs

The tale begins with suicide, mixes in a few miracles, but has no ending because one woman and two small United Methodist churches believe faith can’t be measured by the number of people planted in the pews.

“Can You Just Get Them Through Until Christmas?” is lovingly written by Margie Briggs who chronicles the ups and downs of her more than 10 years as a lay minister to Calhoun and Drake’s Chapel — two small rural churches in Missouri.

The book begins with a shocker when a seemingly happy pastor is late for Sunday service. Worried parishioners go to his house and find him dead on his couch with a 12-gauge shotgun between his legs and a copy of his will next to his body.

Briggs was a certified lay speaker at the time and a member of another United Methodist Church in nearby Creighton, Missouri. The Rev. Cody Collier, district superintendent, asked her to step in temporarily until a pastor could be assigned to the stunned churches.

“For two months, I preached about God’s love and grace. I listened to anyone who was ready to talk,” she writes.

After those few months, the churches were assigned a licensed local pastor and Briggs thought her time as a preacher was done.

But the new pastor’s ministry abruptly ended when police came looking for him one Sunday morning. He left his stint as a bell ringer for the Salvation Army on Saturday night and took the collection bucket home with him.

“Can you just get them through until Christmas?” he asked Briggs. She said yes and has been preaching most every Sunday since.

Lay ministers are not ordained and cannot baptize or consecrate the elements for Communion, but throughout the book, Briggs talks about how many times God helped her navigate her ministry despite those restrictions.

“My only degree is in life,” she states with candor.

Briggs follows her faith and her churches trust her.

One of her favorite chapters in the book is about God placing her in a man’s life as he was dying. He had asked her to baptize him and she knew that during the final hours of a person’s life, anyone is able to baptize.

“That day I received the firm affirmation I was doing what I was called to do, being in a small community sharing the Gospel wherever, whenever, however it needs to happen. What happened that day will live forever in my heart,” she said, in an interview with United Methodist News Service.

Over the years the two churches have renovated their buildings, started a food pantry, begun hosting yearly Christmas and Easter parties for the community, started holding luncheons for school teachers and first responders — and they’ve grown.

When Briggs first started, the combined worship attendance had dropped to 14.

“In the 10 years since 2006, the Calhoun church has celebrated 60 baptisms, 16 re-affirmations of faith and 30 letters of transfer. Drake’s Chapel has had eight baptisms and 15 transfers during that same time,” Briggs writes. “To God be the glory.”

Each of the chapters of the book are short but powerful moments in time. Included at the end in is a study guide written by Kay Kotan, a credentialed coach, church consultant, speaker and author.

In a funny twist of fate, Briggs and her husband were once Sunday school teachers and youth sponsors for a troublemaking little boy named “Bobby.”

“Bobby was the prime example of a boy who challenged us. Every time I turned around, he was up to no good,” she writes. She marvels at the boy who later became her boss, Bishop Robert Farr.

Farr wrote an epilogue for her book.

“This book is full of ideas on how to reach people through small congregations and examples of how lives can be changed and transformed,” he wrote. “Every small congregation could benefit from using Kay Kotan’s study guide, at the back of the book, to explore some of the questions posed about ministry, mission and outreach.”

“Cass Community Publishing House has the mission of providing a megaphone to under-represented voices, and Margie’s book fit both because we don’t hear enough from people in rural settings and because very few books are authored by lay people,” said Fowler.

“Her story is compelling and important for rural pastors and small congregations searching for inspiration. Margie has walked the talk. Now she has shared what she tested and tried without filtering her description or hiding her mistakes,” Fowler said.

In the introduction, Briggs states her hope that the book will rekindle people’s faith in churches that have fewer than 100 members.

“There is an urgent need for small churches both in declining rural areas and in impersonal metropolitan areas where many struggle with isolation and loneliness.”