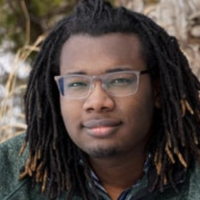 Sendy is the child of Karen and Rev. Louis W. Grettneberger (Grand Haven: Church of the Dunes). Sendy Grettenberger died in Elk Lake in an accidental drowning on Friday, June 10, 2022. Sendy went out to read his book on a beautiful peaceful day on the lake, which was one of his favorite things to do. He removed his life jacket and lay down in his boat.

It appears his anchor line broke, and in an effort to grab the anchor line, he fell into the water. Many raced to respond to his shouts of help. Though he was a swimmer, by the time they reached his boat, he had disappeared into 25 feet of water. Emergency rescue and recovery crews required nearly six hours to find him.

With broken hearts, Karen and Lou Grettenberger and their children share this note of celebration and grief. Thank you for taking time to know the Sendy we loved. May we all find a way to peace amid our tragedy.

Our gentle giant was born in Haiti, the poorest country in the Western Hemisphere. Left bereft of family in an orphanage that was fraught with abuse and neglect, he collected fingerprints of trauma.

Sendy was evacuated to a prospective adoptive family in the U.S. after the earthquake hit Haiti in 2010. Multiple traumas had left him broken and reactive, especially toward those who most desired to love and care for him. We do not know the full breadth of what happened in that placement. We know that he was abandoned, once again, to an orphanage/detention center in Miami, FL. There, he struggled to insulate and protect himself from the terrors of the world.

In Miami, his story merged with two new Haitian brothers, Eric and Luke. They had common roots and pains, which bonded them forever. The three came to us at ages six, seven, and eight as foster children. They were preparing for adoption by a local family, only to have their hopes dashed by the ugly face of rejection once again. Recognizing that Sendy would not survive another rejection, Mama knew that Sendy and the other boys needed to stay with us forever. He joined our family through adoption and gained 20 brothers and sisters.

Sendy was an emerging mosaic of sharp shards and needed to be loved hard. Sometimes his pointed shards injured those who came too close. Through mother’s hugs, consistent love and discipline, nightly book readings, special snacks, weighted blankets, and constant negotiations, those shards began to come together; and he became more connected and whole. Sendy was a work of art formed by all he had endured and all he was beginning to embrace.

Through his middle and high school years, Sendy began to discover who he was in the world. “I’m a Mama’s boy – nothing wrong with that!” he quipped. He begged to be allowed to grow dreadlocks, and (much to our surprise) invested time, patience, and hard-earned money in the years-long process. He joined a knitting group at church and stuck out like a sore thumb among the church ladies with his six-foot, 230-pound frame. He dominated in word games and dodge ball. In the summer, he loved to fish and could be found sunbathing on the trampoline all day. More than anything else, he loved to read – living vicariously through fictional friends. He was often more comfortable in the imaginary worlds of books than in the physical one, where we frequently needed to hold him tightly until he could remember his peace.

As one friend mused, “You raised a beautiful son inside and out, who knew love against incredible odds.” His last month was no less miraculous than the rest of his life. Sendy graduated in May 2022 from Grand Haven High School. He wrote thank you notes for every graduation gift he received, weaving in snippets of his unique sense of humor. He started volunteering at the hospital. He continued a part-time job. He reignited his love for art.

Sendy died, but not for some meaning or purpose. He died randomly, accidentally, suddenly. Yet before he died, he had become a man – a strong and beautifully vulnerable man. He accomplished his life’s work of learning to trust, learning to receive love.

The twinkle in Sendy’s eyes belied the secret hurts and fears gently tucked inside fuzzy footie pajamas and cuddly blankets. Our good friend wrote moments after he died, “The light in Sendy’s eyes has returned to the stars.” We find comfort in that, but we wish the light was still in his eyes. Damn it.

We will not be holding a public ceremony, but you may remember Sendy by giving below.

Sendy was a lover of books, kids, cats, and family. If you would like to honor his loves and his memory, we invite you to share a memorial gift. Gifts sent by mail will be split evenly between Imagination Library, the Bethany Christian Services Refugee Program, and the Harbor Humane Society, unless specifically designated. Gifts can be sent to the following street address:

Please indicate that you are making your gift in memory of Sendy Grettenberger and notify us of your gift by entering the above street address and/or the email address: RememberingSendy@gmail.com