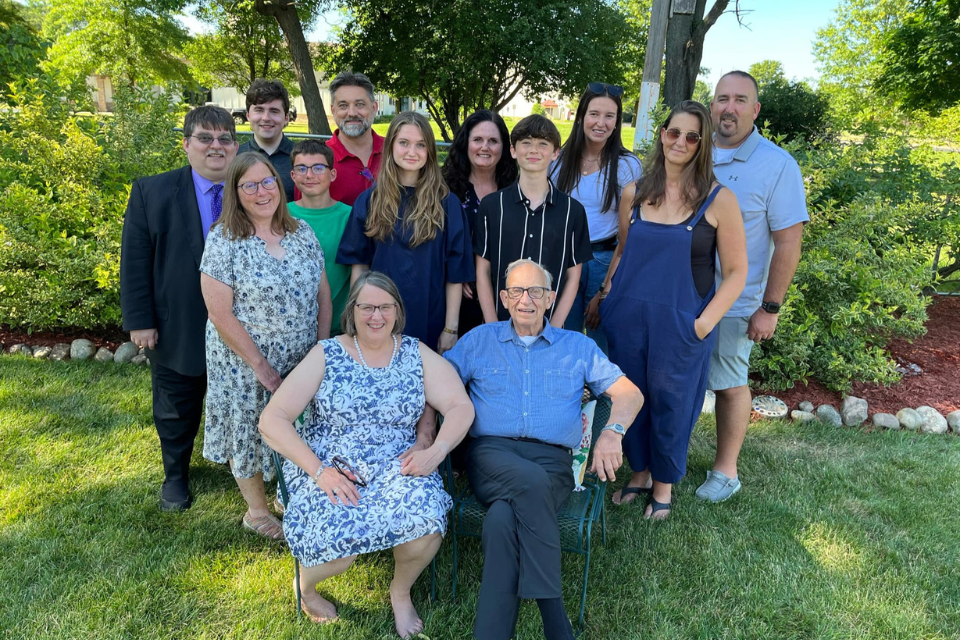 The family of Rev. Dr. Lowell “Wally” Walsworth (front, right) gathered to celebrate his 60 years of ministry during a special Ministry Sunday at Sturgis: First United Methodist Church on July 10, 2022. A student scholarship in his name has been created at Garrett-Evangelical Theological Seminary. ~ photo courtesy family of Lowell Walsworth

The 60-year ministry of Rev. Dr. Lowell “Wally” Walsworth was recently celebrated at a Ministry Sunday service where a seminary scholarship in his honor was also announced.

On Sunday, July 10, 2022, a special Ministry Sunday was held in Sturgis, MI, at First United Methodist Church in recognition of Rev. Dr. Lowell “Wally” Walsworth for his 60 years of ministry as an ordained elder.

Heetland explained that Ministry Sundays are held by congregations wishing to honor a pastor for his or her ministry. Contributions to a G-ETS seminary scholarship in honor of the pastor for awarding to future students are received. The seminary makes the first $1,000 contribution, and if the fund receives $25,000 or more, it becomes a permanently endowed scholarship awarded to a deserving seminary student.

The total cost of a seminary education has increased to over $50,000 a year for a three-year master’s degree, so scholarship assistance for students is of vital importance. Heetland noted that a Ministry Sunday recognition is a win-win situation. The honored pastor experiences the celebration of ministry as a win. The local congregation experiences a win by publicly affirming the ministry of the church. And future scholarship recipients become the beneficiary of a win with much-needed help for seminary expenses.

According to Heetland, there are currently over 200 named scholarships at G-ETS. He believes that the scholarship being established in recognition of the 60 years of ordained ministry for Rev. Lowell Walsworth is the first inspired by six decades of service.

Lowell Frank Walsworth was born on August 24, 1936, as the oldest of three children to Franklin and Fredrika (Nordoff) Walsworth in Muskegon, MI. Franklin Walsworth was employed by Brunswick Corporation, and Fredrika stayed at home to raise a family that grew to include two daughters, Marva and Wanda. The Walsworths were active members of Muskegon: Central United Methodist Church.

For three of his high school years, the Walsworths lived in Downers Grove, IL, where Lowell attended high school before returning to Michigan and his graduation from Muskegon High. It was in Downers Grove, while he was crossing a street, that one of his new friends said, “You don’t look like a Lowell. You don’t act like a Lowell. You are a Wally!” The nickname stuck, and he has been Wally to family and friends ever since.

His wife, Jessica, notes that the only people who still call him Lowell are his sisters. Wally also remembers that his mother called him Lowell Frank on the day she discovered he had shoplifted a toy cap gun from a Muskegon store. His mother made Lowell Frank return the gun and apologize to the manager, who was a member of Muskegon: Central UMC. He learned important lessons that day about the Eighth Commandment and Christian confession.

One summer during high school, Wally attended Lake Louise Christian Camp near Boyne Falls, MI, and experienced a call to pursue ministry. He remembers an evening speaker standing by the campfire and inviting anyone who was experiencing God’s call on their life to enter ministry to stand. Wally stood up. This personal decision for faith altered the direction of his life.

Wally attended Albion College and graduated in 1958 with a bachelor’s degree in speech and communication along with a minor in history. In 1962, Walsworth received his Master of Divinity degree from Garrett Theological Seminary. Wally carpooled weekly to campus for classes with other Michigan classmates, returning home on the weekends to serve the churches where they had been appointed.

Wally’s first assignment was to co-pastor the four congregations of the Hastings Parish. His next appointment was to serve a two-point charge at Lyon Lake and Marengo. Walsworth was ordained a deacon in the West Michigan Conference in 1959 and an elder in 1962.

In 1978, Walsworth earned his doctorate in communications from Michigan State University. In addition to pastoral ministry, Lowell also taught communications courses at Olivet College and later at Kellogg Community College in Coldwater until he finally retired at the age of 80.

Wally loves to recall ministry stories like weddings that did not go according to plan. He remembers with a smile the drama that ensued before one wedding when the mother of the bride forgot that she was slated to bring the bride with her to the church for the ceremony.

At another, the wedding ring was inadvertently dropped during the vow exchange and fell into the floor vent. Wally improvised and offered his own wedding ring as a substitute until the errant ring could be rescued after the service.

He also remembers the conflicting emotions when he helped officiate both a funeral and a wedding for the same family on the same day. The wedding had long been scheduled, and the grandmother died unexpectedly days prior. Since the family and friends were already in town for the wedding, they had the funeral in the morning and the wedding later in the day, at different churches.

While teaching at Olivet College, Wally helped organize the college symposium which featured guest lecturers. He remembers the symposiums included persons like author Stephen Covey who established his national reputation for his best-selling book, 7 Habits of Highly Effective People, and another event that featured the testimony of Holocaust survivors.

Wally first taught at Olivet College on Mondays, his day off from pastoral ministry, while still serving churches in the area, before receiving a special appointment to manage the symposiums and teach full-time.

Wally met his wife, Jessica, while serving as pastor of Sturgis: First United Methodist Church. Jessica was the regional manager for Girl Scouts of Singing Sands at the time. After they married in 1998, he continued working at Olivet College but returned to Sturgis where Jessica had become the Executive Director for the Sturgis Area Chamber of Commerce. Wally and Jessica have made Sturgis their home for the last 24 years.

His oldest son, Dr. David T. Walsworth, is a family practitioner and teaches medicine at Michigan State University, and is married to Sue. They live in Okemos and have three children: Kiersten, Robert, and William.

Eric Walsworth, Wally’s second son, is a management director for Ernst & Young. Eric and his family traveled from their home near Warsaw, Poland, to take part in the special service on July 10. Eric is married to Karla, and they have two children: Ella and Wesley.

Sarah Walsworth Carpenter, Walsworth’s daughter, is married to Bryan, and they live in Vermontville, MI. Their daughter’s name is Keilyn. Sarah is a site director for Qualfon.

Jessica’s son, Matt Perry, lives in Fort Wayne, IN, and is an admissions representative for Indiana Tech. Matt has three stepchildren: Chris, Katlynn, and Ashley.

Sturgis: First United Methodist Church continues to be an important part of Walsworth’s life. Rev. Sue Babb, pastor of Sturgis: First, first met Wally while she was serving as an associate pastor at Jackson: First UMC. Wally, who was a faculty member at Olivet College at the time, volunteered to lead district lay speaker training.

Babb notes that Walsworth served as pastor of Sturgis: First from 1993-1995, and then moved back to Sturgis in retirement.

Babb praises the way Walsworth models faithful service. The church has opened a free store to provide clothing and household goods to needy persons in the community. Every Wednesday morning and Friday afternoon, Walsworth volunteers to hang up clothing and help mind the store.

During the 1990s, Walsworth helped establish the Disciple Bible Study program at Sturgis: First, and Babb notes that many of the current church leaders were blessed to grow in their faith because of those classes. Walsworth also started teaching a Bible study group for men, which has met every Monday morning at 8:00 for 14 years.

In his role as a retired pastor, Walsworth sometimes attends the church’s Administrative Council meetings where his experience and insights have proven helpful. Babb also appreciates how Walsworth has helped with preaching and pastoral care as needed.

During his Ministry Sunday sermon on Romans 10:13-15, where the Apostle Paul writes about the importance of preachers in bringing the good news of God’s saving love to others, David Heetland shared that there are three vital things each of us can do to help this important work.

In honoring Walsworth by presenting him with a thousand-dollar gift from the seminary toward a new scholarship, Heetland praised Walsworth’s ministry.

“Lowell Walsworth faithfully served local congregations, taught students at Kellogg Community College and Olivet College, was active in United Methodist camping and Walk to Emmaus, and served the larger church through a number of district and conference committees. Wally positively touched the lives of hundreds of people for Jesus Christ.”

With the creation of this scholarship, the ministry of Rev. Dr. Lowell “Wally” Walsworth will continue as future lives and ministries are blessed by this generous gift.

Persons wishing to contribute to the Lowell Walsworth scholarship fund at Garrett-Evangelical Theological Seminary may do so by visiting www.garrett.edu/giving.

Persons wishing to thank Lowell Walsworth personally for his ministry are invited to send their memories in care of Jessica Walsworth, 1412 E. Hatch St., Sturgis, MI 48091 or by email to [email protected].

Anyone wishing to learn more about hosting a Ministry Sunday as a way to honor their pastor and raise scholarship funds at Garrett-Evangelical Theological Seminary are welcome to contact David Heetland at [email protected].

The Ministry Sunday service held at Sturgis: First UMC on July 10 in honor of Lowell Walsworth can be viewed in its entirety on the church’s Facebook page.