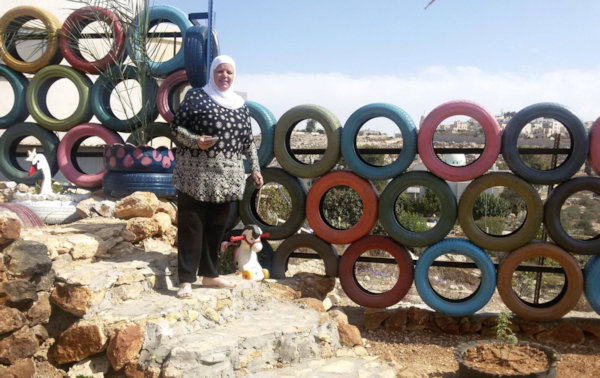 UMCOR provides assistance for RWDS, one of the most influential women’s organizations in Palestine.

AL-WALAJEH, Palestine—A few years ago, Rasha Hajajelj’s husband was involved in a workplace accident that left him temporarily disabled. With her husband unable to work, Rasha was determined to support her family.

She found success and support by joining Palestine’s Rural Women’s Development Society, a nonprofit organization, which receives assistance from the United Methodist Committee on Relief. RWDS is among the most influential women’s organizations in Palestine, bringing a strong grassroots presence to rural communities. According to the Union of Cooperative Associations for Saving and Credit, RWDS has more than 3,000 female members who are active in a network of 64 clubs between West Bank and Gaza.

For Rasha and her family, their garden is their main source of produce. “Now, we don’t need to buy vegetables from the market, which used to be a financial burden to us,” said Rasha. “In addition, we learn how to use safe, organic fertilizers which gave us healthy, natural and organic vegetables. I aspire to expand my work in my garden by planting on a bigger scale, so I can sell my produce in the market for income.”

RWDS women sell their homegrown produce and repurposed furniture at local markets. As a cooperative, they have more bargaining power than they would individually and can better provide for their families. In a country where movement is difficult, such household-level gardening programs provide the additional benefit of social support as women build long-lasting friendships.

Today, Rasha’s home garden has become a model for her community. “Even though this garden is small, it has made a huge impact on our lives and helped us in our finances,” she said. “Rain starts with the first drop, and we see this project bringing good rain to us.”