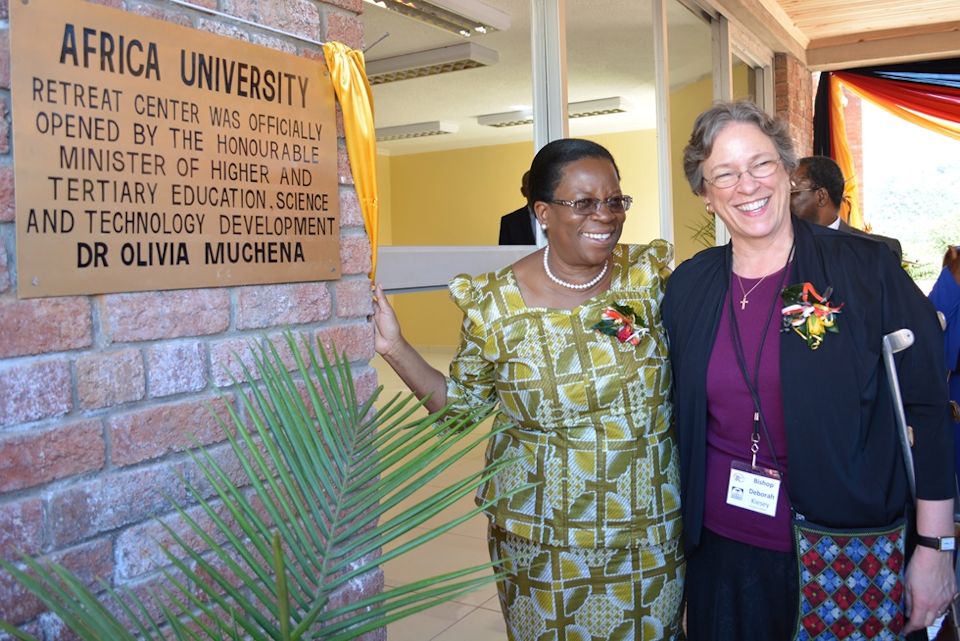 A 38-person delegation from the West Michigan Annual Conference, led by Bishop Deborah Kiesey, was one hand for the dedication of the guest center on the campus of Africa University (AU) in Mutare, Zimbabwe on March 19, 2014. The $1 million dollar, 46-bed, “Ubuntu Retreat Center,” hosts visiting faculty, conferences and mission teams from around the world. For the delegation, it was also the culmination of a five-year journey of faith that affirmed what is made possible when United Methodists work together to change the world. ~ photo courtesy Africa University

Larry and Jane Kies, missionaries serving at Africa University, talk with Bishop Laurie Haller about their greatest joys and challenges.

Many of you know of my love for Africa University. Ten years ago, in 2010, I made my first visit to AU when I was a district superintendent in Michigan and created a task force to raise money to build a retreat center on the campus. During that first visit, we had a vision of what came to be named the Ubuntu Retreat Centre, a place where visitors could enjoy the beautiful surroundings of the university and learn more about the culture of Zimbabwe and the African continent.

In 2014, I led another group from Michigan, including Bishop Deb and Brad Kiesey, for the Ubuntu Centre’s dedication, which was not quite completed. What joy to see our United Methodist Africa University thrive and become a leader in education among countries on the African continent.

A third group from Iowa traveled to AU in the fall of 2018 after raising over $45,000 to complete the kitchen so that meals could be prepared for guests at the 24-room Ubuntu Centre. On that trip, our group became acquainted with Larry and Jane Kies, both of whom were General Board of Global Ministries missionaries for many years. Larry formally retired on September 30. I first met Larry in 2014 when he agreed to guide me on a hike to the top of nearby Mt. Chiremba.

Jane, who is British but grew up mostly in southern Africa, and Larry, originally from Iowa, have always looked forward to providing hospitality for United Methodists from Larry’s home state. In 2018, we enjoyed a wonderful tour of the Africa University Farm, where Larry served as the Technical Advisor for many years. Larry also led DS Paul Wilcox, Pastor Ben Wedeking, and me on a second climb up Mt. Chiremba.

After serving as directly hired missionaries in Botswana, where Larry managed a farm at a mission high school, Larry and Jane underwent formal missionary training in Atlanta in the early 1990s. They were assigned in 1994 to Nyadire Mission in Zimbabwe. Larry managed the UMC mission farm, with dairy and beef cattle, corn, cotton, and a butchery, while Jane taught English at Nyadire High School.

In 2002, they moved to Africa University and have been there ever since. Larry has provided technical assistance to the AU farm and has also taught many agricultural classes. Jane has been teaching English at AU for the last 18 years while raising their children. Jane said, “Learning the ropes in teaching English to university students was fun. The mix of culture, language, and dress was … and still is … very exciting.” I asked Larry and Jane several questions a few weeks ago.

What have been the greatest challenges you have faced as missionaries?

Larry: “My greatest challenge came when I had been in Maun, Botswana, for five years. I had felt God calling me to teach in Africa since my undergraduate years at Iowa State. When the opportunity arose for me to start working for the church in 1980, I felt that I was finally where God wanted me. I felt that I was effective in my work there in running the school farm, in teaching, and in advising the Scripture Union (Christian youth) group at school. But by 1985, being single had become a burden… Although Jane didn’t realize it when she first arrived in Maun, she was the answer to my prayers.

“Another major challenge came from 2000 to 2008, when Zimbabwe suffered from extreme hyperinflation and political instability. In 2000 we had to leave Nyadire Mission for six months because the local church leaders felt that due to political issues (in which we were not directly involved), our presence was not only a risk to us but also a threat to those with whom we worked… In the end, God did provide for all of our needs during those years, but it was a trial.”

Jane: “In my first weeks in Zimbabwe on a remote mission, surrounded by friendly people I could not understand, in a rather dry and dusty environment (it was in the dry season), I often asked the Lord: ‘What am I doing here?’ It was a lonely time, and I often worried that our children would not thrive in the small mission school with its unfamiliar approaches to teaching and learning. God has shown me how wrong I was since they are all thriving now and value their upbringing and African roots. In time, I also discovered God’s purpose in making a life with people there and teaching English in the High School. We have some good friendships that continue to this day.”

What have been the greatest joys in your missionary role?

Larry: “Treasuring relationships formed in each community where we served. Also, seeing former students progress professionally, not only the few who I knew from the start would be successful: earning advanced degrees, becoming productive farmers, rising to responsible positions in companies, even becoming involved in agricultural development as missionaries. But there were also several who gave me a special joy when they struggled in their first couple of years here at AU.

“After words of encouragement, they found their niches, improved their grades, and earned their degrees. I know that the future of Africa is in their hands. I also know that many people want to make a difference in the world, and they can do so by enabling others to do work that they themselves can’t do. Connecting the two groups (those in need and those wanting to help) has given me great joy.”

Jane: “Friendships, family life, meaningful roles in the church, influencing, and being influenced by so many Zimbabwean and international students. Watching students smile with pride as they become more fluent in English and move on to their degree program with greater confidence. The great beauty of the country itself and opportunities to hike, camp, and view game have given me incredible joy.”

When do you plan to come back to the U.S. for a time?

“We are not making plans to return to Iowa for now. Our main purpose in flying to Iowa would be to see people, many of whom are in high-risk groups for Covid-19. Even if travel restrictions are lifted, as long as Covid-19 is a threat, we will not feel comfortable coming into close contact with many people, risking our health and theirs. We hope that by the summer of 2021, the situation will have improved enough to come for a short visit. We hope that in 2022 we can revisit churches.”

Larry: “When I first left Iowa for Africa, I had secret dreams of following in the steps of Norman Borlaug, the Iowan who won the Nobel Peace Prize for his work that started the Green Revolution. Nearly three decades (now more than four) later, I realize that I will never be short-listed for a free ticket to Oslo, but also that, for all of us, it’s all about making ourselves available to carry out God’s purposes – making a difference where we can, using the skills God has given us. Jane and I know that Africa University will not be able to solve all of Africa’s problems, but still, we are proud to be part of the church’s effort to do what we can.”

Do you have any words of encouragement?

Jane: “I am not American, but I have been made to feel special as we visit churches in Iowa. I have appreciated the hospitality and warmth of congregations, the effort made to ensure that our visits are fun and enjoyable, and the interest so many show in mission – our joint mission (from everywhere to everywhere!) as Christians. I have also seen how young people from America can be so touched by the experience of coming to Zimbabwe and interacting with students and churches here. It is a life-changing experience! So, planting seeds of missionary service in the lives of the youth is so vital to keeping the mission of the church alive.”

The Kies plan to stay at Africa University for the foreseeable future, where Larry will continue teaching as a volunteer. Jane will continue as a GBGM missionary, teaching Intensive English. Thank you, Larry and Jane, for keeping the mission of the church alive from everywhere to everywhere. We look forward to seeing you when you can return to Iowa.

~ Reprinted with permission from Bishop Haller’s blog, Leading from the Heart. The Michigan Conference partners with missionaries of The United Methodist Church, serving here in Michigan and around the globe. Click here to learn more.