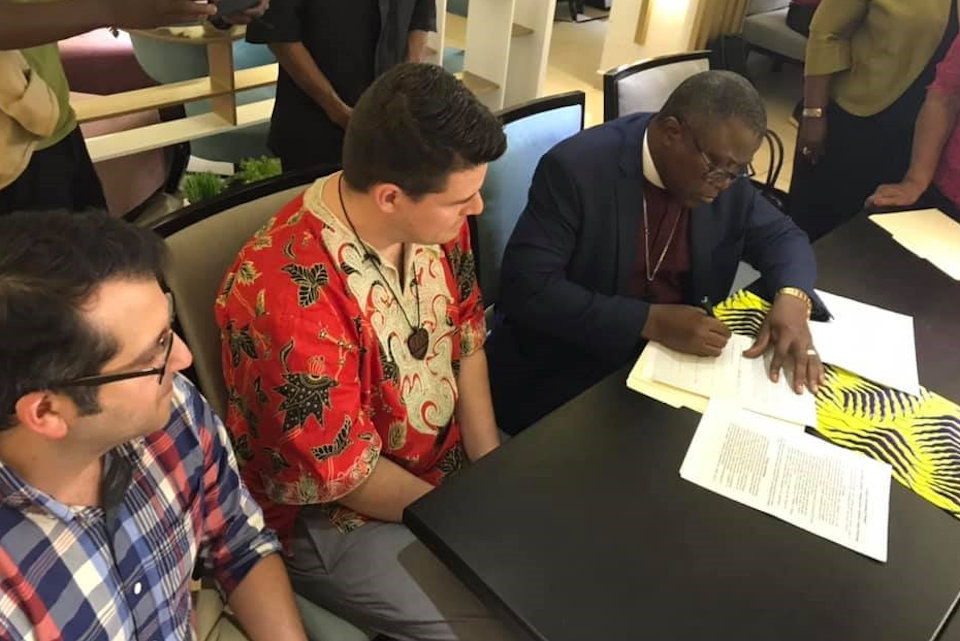 Nine persons from Michigan traveled to West Africa last month to attend the Liberia Annual Conference. Covenant-signing and visits to mission sites were highlights of the trip.

The Liberia Conference has been very much in United Methodist news in recent days. During their annual session, February 10-16, members proposed a number of amendments to The Protocol of Reconciliation and Grace through Separation, a significant piece of legislation on the plate of the 2020 General Conference. Days later, The Africa Initiative, a United Methodist advocacy group chaired by a prominent Liberian pastor, the Rev. Jerry Kulah, endorsed the Protocol. These developments reverberated through the denomination, including GC2020 watchers in the state of Michigan.

While all of that was taking place, nine persons from The Michigan Conference were in Ganta, Liberia to take part in the forging of a new covenant between the Michigan and Liberia conferences. Such a partnership is not a new thing, however, only half the state – the former Detroit Conference – was engaged with it. The new agreement will involve United Methodists around the entire state, a relationship authorized by the first session of The Michigan Annual Conference last June.

“This covenant affirms the years of partnership with Liberia,” explains the Rev. Jon Reynolds, Michigan’s leader of Liberia Covenant Partners. “At the same time, it invites churches across Michigan to grow in partnership with brothers and sisters in Liberia.”

Reynolds acknowledges that he has received questions and concerns regarding Liberia’s position on LGBTQ inclusion. He does not take such challenges lightly and considers them legitimate. But Reynolds puts it in context, “We are talking about human rights issues – the right to water, food, health care. When people come to Cass Community UMC in Detroit for assistance, we don’t ask about their politics.”

His view on the tension transcends United Methodist polity and puts the focus on the gospel. “Yes, some of us are on opposite sides on human sexuality. But Christ calls us to be in places like Liberia.” He adds that Liberia, according to economic rankings done by the United Nations, has the lowest income per household of any nation in the world. “There is good work to be done there,” Reynolds says, “and we have many years of relationship with the folks in Liberia.”

He says that there are two ways to face disagreement of this kind, divestment or investment. “Some divest by pulling their financial support. But that only punishes children who would no longer be able to go to school; teachers who are trying to increase the level of education; the four-year-old child at the clinic in Ganta, who depends on the generator that powers the oxygen system he needs.” To those who threaten divestment, Reynolds encourages investment. “Our covenant partnership is based on investment of the kind that says, ‘despite our differences, we believe in you, and care about you.’”

Reynolds reports that reservations he has heard from Michigan United Methodists were also voiced on the floor of the Liberia Annual Conference. “Someone in Ganta asked, ‘Should we wait until after General Conference and sign the covenant after we see what happens?’” While there was initial support for that among Liberian members of the conference, Reynolds goes on. “At that point, Bishop Quire said, ‘We have been friends for 20 years. Our friends in Michigan have always been faithful in their support and because of that, schools and churches have been built. Our initiatives have always gotten a response from Michigan.” The Bishop concluded his remarks by saying, “I believe we are not interested in terminating a 20-year friendship.”

The vote to sign the new covenant then received the unanimous support of the members of the Liberia Annual Conference.

The Rev. Paul Perez, a first-time visitor to Liberia, was a member of the Michigan contingent. Upon witnessing the covenant signing, Perez observes, “The Liberia Annual Conference’s affirmation of the Covenant with the Michigan Annual Conference is, for me, a sign of hope in midst of our current denominational uncertainty and a testament to the power of the relationships built over two decades.” The Rev. Duane Miller counted the 2020 visit as his sixth trip to Liberia. He reflects, “Both conferences have a very strong commitment to maintain and grow our relationship. We have worked so well together in past years we have built a solid trust and commitment to each other.”

Like Reynolds, Miller puts the experience in perspective. “We must understand what they have been through in their 14-year civil war and experience their faith and trust as they put the war behind them.” Miller adds, “Liberians have a tremendous sense of faith and trust in God. They are very open about that faith and it is evident in their actions and speaking. They give great encouragement to us to keep working for God’s kingdom on earth.”

The Rev. Alex Plum was another visiting the country for the first time. He echoes Miller. “Liberians remind us that, in the midst of our very complex, busy, and overfull lives, we need to step away from the noise and recommit to finding Jesus. We need to find and experience Gospel simplicity. I really experienced that first-hand in the churches and worship while in Liberia.”

The Michigan United Methodists did more than attend the Liberia Annual Conference. They visited the Bishop Judith Craig Children’s Village, a project supported by Michigan since its founding in 1999. They participated in a ribbon-cutting ceremony of two buildings. One of the cottages was renovated with funds raised by the ingathering at the 2019 Michigan Annual Conference The other was funded by Northville UMC.

“That was my highpoint of the whole trip,” Reynolds says. “The cottage funded by the ingathering will become a computer lab and library.” He asked one of the youngest girls at the ceremony to come forward and cut the ribbon. As the four-year-old took the scissors, Reynolds commented, ”This isn’t mine to do. This is your space.”

Paul Perez reports that “The Covenant names areas of focus including education, agricultural development, and water justice,” and adds, “Communities in Michigan and Liberia both struggle with these issues.” In addition, the Judith Craig Children’s Village is a special priority for Michigan. Plum emphasizes the need for strategic action. “Both conferences need to be working together to ensure that we can maximize the reach of our financial gifts and our in-person labor in mission.” Further, he said, “We need to do this in coordination with the Liberia Annual Conference plan, which they developed to control their own future. At the same time, we need to work hand-in-hand as Michigan United Methodists to help them get there.”

This is a spiritual as well as a financial matter, Plum states. “We need to be patient and humble as we do this. It’s a marathon and not a sprint!”

This story will continue at the Michigan Annual Conference held in Acme, May 28-31, 2020. Forty-five percent of the Ingathering at the session will be for Liberia. Once again, the recipient will be the Bishop Judith Craig Children’s Village.

The focus this year is not infrastructure but food. Reynolds explains that the Liberian economic situation has only worsened; currency worth a penny is now worth half a penny. “We asked the Rev Robert Sieh, Director of the village, about his priorities for the 2020 gift from the Michigan Conference,” Reynolds says. “He told us keeping the kids fed, making sure there’s enough food in the village, is of critical importance.”

Bishop Samuel Quire will be welcomed by Bishop David Bard at the members of the 2020 Michigan Annual Conference. A covenant-signing ceremony is planned.

There’s also a resolution drafted by the Liberia Covenant Partners included in the 2020 AC legislation. The subject is education and asks that all United Methodist congregations in Michigan raise $300 for scholarships in celebration of the new covenant. $300 is the cost of sending one child to school in Liberia for one year. (Please note, this is a separate matter from the Ingathering that will buy food for the Children’s Village and requires a vote by the 2020 Annual Conference.)

This is the bottom line for Reynolds and the Covenant Partners. “We can still do good missional work even in times like this.” He does not anticipate that any action by the General Conference will threaten the bonds between the Michigan and Liberia conferences.

Reynolds reflects, “If the Protocol goes through, and we end up in separate Methodist institutions, we can still be in covenant together. There’s precedent for that in Michigan’s other longstanding relationship with Haiti.” (The Methodist Church of Haiti is not a part of The United Methodist Church. It is a district of the Methodist Church in the Caribbean and the Americas.)

And hope doesn’t travel one way, as Rev. Alex Plum affirms. “We have much to learn from one another. Liberians are faithful people doing amazing ministry with so few resources. They are an inspiration to us about getting our ministries to focus on the main thing.” And what is that main thing? “Helping people draw closer to Jesus Christ and to experience the transformation in that Christ relationship,” Plum concludes.