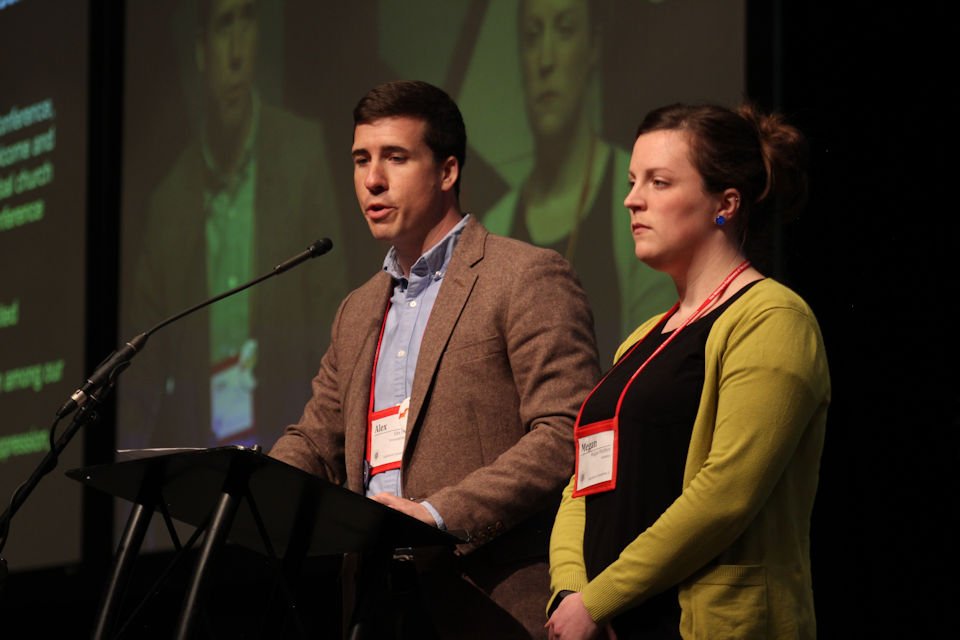 Two young adults who served as delegates to the 2019 General Conference -- Alex Plum and Megan Walther -- present a resolution to the 2019 Michigan Annual Conference regarding aspirations toward inclusion of LGBTQIA persons. ~ mic photo/Jonathan Trites

In a series of votes taken June 1st on matters related to the 2019 and 2020 General Conferences, the Michigan Annual Conference expressed aspirations for greater inclusion of LGBTQ persons.

ACME MI… Amid the global debate on the future direction of The United Methodist Church, members to the Michigan Annual Conference indicated a need to test the waters to learn where those in attendance stood on decisions made during the General Conference in St. Louis, MO last February. Three times, clergy and laity members voted on measures that would provide Bishop David Bard and conference leadership with aspirations for greater inclusion of LGBTQ persons in the Michigan Conference.

In addition to the ordination of nine persons, nine Elders and two Deacons were commissioned.  Of those commissioned, two are openly gay persons.

Voting members also approved the taking of a non-binding straw poll, GCR 2019-3. Before taking the vote, the Rev. Amy Mayo-Moyle, chair of the Michigan Conference Leadership Council, who presented the resolution said, “We are in a hard place… however, we are at a place where we must best discern how to go forward. The reality is that we very well may be facing schism. We don’t know what is to come. This will help us know the sense of the Annual Conference.” The result of the straw poll indicated a two-thirds preference (69% — 789 votes) for “a United Methodist Conference whose policies allow for but do not require clergy to officiate at same-gender weddings, allow for consideration for ordained ministry of persons regardless of sexual orientation, and in which appointments are made with consideration given to the full range of contextual realities.” Three hundred fifty members (31%) of Annual Conference members favored instead, “a United Methodist Conference whose policies include the current Book of Discipline language on ‘homosexuality,’ same-gender marriage and LGBTQIA+ ordination along with enhanced enforcement of those policies determined constitutional by the Judicial Council.”

After the vote Bishop Bard made clear this straw vote was only one indicator of where Michigan congregations stand, “It does matter how this poll is interpreted.” He said, “This is a vote of the people gathered, lay and clergy, in this particular place in this particular time.” The Bishop acknowledged the pain and difficulty of taking the poll and the importance of caring for everyone’s feelings, “Jesus of the parables cares as much about the 30% as the 70%. I encourage us to continue to do the hard work.”

Finally, by a nearly identical margin, the conference members also approved GCP 2019-4, a petition to be considered at the General Conference in May 2020 in Minneapolis MN, for the creation of a Central Conference in North America. If adopted by GC 2020 this would “provide for the creation of a Central Conference encompassing North America” allowing more contextualized ministry and mission. In other words, United Methodists in the United States would be able to make denominational decisions impacting American congregations and clergy without the input of United Methodists in other countries.

On Sunday, June 2, during the Service of Recognition, Commissioning and Ordination, two deacons and seven Elders were ordained, including one Elder as a courtesy to Bishop Samuel Quire of the Liberia Conference. Two Deacons and nine Elders were commissioned, including two openly LGBTQ persons, Alex Plum, and Joan Van Dessel. All were commissioned within the parameters of the current language of The Book of Discipline and church law as defined by the Judicial Council of The United Methodist Church.