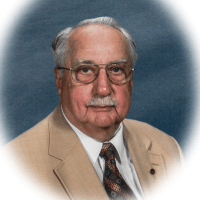 Ken attended a one room grade school and Caro High School. He farmed for two years before he married Doris. Ken left Michigan to attend Taylor University in Upland, IN and continued seminary education at Christian Theological Seminary in preparation for ministry. He became an ordained elder in 1960 and was appointed to Robinson Chapel and Wesley Chapel Churches near Fort Wayne, IN. In 1965, Pastor Tousley and his family moved to the Detroit Conference area. Throughout his years as a pastor, he was appointed to serve in Saginaw, Ames, Tawas, Adrian, and West Branch churches, and as the superintendent of the Port Huron District in 1989. Ken loved to sing and share his faith through music. Besides his deep affection for the church, Ken was an avid carpenter. He enjoyed remodeling and helping with family building projects.

Visitation will be from 3 to 7 p.m. on Thursday, November 3, 2022 in Kranz Funeral Home, Cass City and from 10 to 11 a.m. on Friday, November 4, 2022 at Cass City United Methodist Church with a funeral service following at 11:00 a.m. The service will be officiated by grandson, Rev. Jeremy Peters of Court Street United Methodist Church, Flint. He will be assisted by Ken’s son, Jeffrey Tousley. Interment is at Ellington Township Cemetery.

Ken’s family has suggested that in lieu of flowers, memorials be considered to the Methodist Children’s Home Society of Redford, MI or to UNICEF. Family and friends may share memories, prayers, and photos at www.kranzfuneralhome.com.

Condolences can be sent to Rev. Phil Tousley or to Doris Tousley, Ken’s surviving spouse.