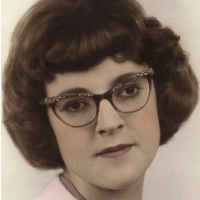 Wife of Pastor John F. Ritter, Delcina (Matevich) Ritter, age 78, of Levering, Michigan, went to be with her Lord Sunday October 21, 2022 at McLaren Northern Michigan Hospital after a battle with illness.

Daughter of Stanley and Mabel (Barton) Matevich, Delcina was born August 26, 1944 in Ludington, Michigan. She was raised in Scottville, Michigan with her two brothers and sister.

Delcina attended Mason County Central High School. Upon graduation she attended North Western Michigan College. It was here she met her future husband of 58 years, John Francis Ritter, Jr. He was on leave from the U.S.M.C. and it was love at first sight for him. They corresponded through letters the next 18 months. He proposed via a written letter (how romantic).

After marriage they settled in Scottville. She was a homemaker and wonderful mother to their three children. She taught Sunday school, V.B.S. and was a youth leader in their church. She also was a 4-H leader, teaching many young girls how to knit and sew. She led Girl Scout troops from Brownies to seniors, and helped establish a Girl Scout camp in Amber Township.

Her husband John’s ministry moved them often, and wherever they called home she planted flower beds. She became a master gardener and worked for some time at Meijer Botanical Gardens in Grand Rapids, Michigan. As her children grew, she worked outside the home as an executive secretary. Always volunteering for school activities and hosting many church gatherings.

She was active in the choir, and played the piano beautifully. The past years she was the nursery attendant. Always enjoying the young children.

At home she loved to host holiday gatherings, playing cards with her grandchildren and spending time outdoors with her great-grandchildren. She was a master at puzzles and always had a cheese platter for company. She enjoyed traveling and had visited almost all 50 states. She was never without a book.

She loved her family, flowers and books, but above all she loved her lord. God has her in his keeping, we have her in our heart, sadly missed, but never forgotten.

She is preceded in death by her parents Stanley and Mabel Matevich; her brothers Robert (Kay) Matevich and Bud Matevich; and sister Marsha (Charles) Giles.

She will be missed by her church family!

Those wishing to make a charitable donation in Delcina’s memory are asked to consider her family or New Hope United Methodist Church.

Condolences may be sent to the family in care of:
Rev. John Ritter
2490 E. Levering Road
Levering MI 49755

Arrangements are in the care of Stone Funeral Home, Inc. of Petoskey.