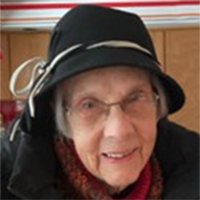 Jenella attended Warsaw High School and graduated in 1944. She attended Albion College and received a bachelor’s degree, with a major in Sociology. Jenella was a member of the Albion Choir and its 8-voice Madrigal Singers. In 1949 she obtained a teacher’s certificate. She taught elementary school in Albion and in Brookline, Massachusetts, eventually changing to adult education, teaching in Saginaw, Port Huron and Warren, Michigan.

She enjoyed gardening, sewing (especially making sleeping bags and quilts for the homeless), reading, writing poetry, composing music, bird watching, camping, baking, cross country skiing and photography. She also enjoyed corresponding with friends and relatives, as well as a few celebrities, such as Christy Brown, poet and writer of Ireland, the late Jill Jackson, co-composer of “Let There Be Peace on Earth” and the late Dr. Howard Thurman, writer, preacher, lecturer, and former Dean of Boston University Chapel.

Jenella enjoyed traveling which included trips to 46 states and 16 trips outside of the U.S., 9 of which were to Russia. She and her family hosted an exchange student from Rio in 1971 and in 1998 she was a Volunteer in Mission to Bolivia for 2 weeks. She was often invited to speak about her travels.