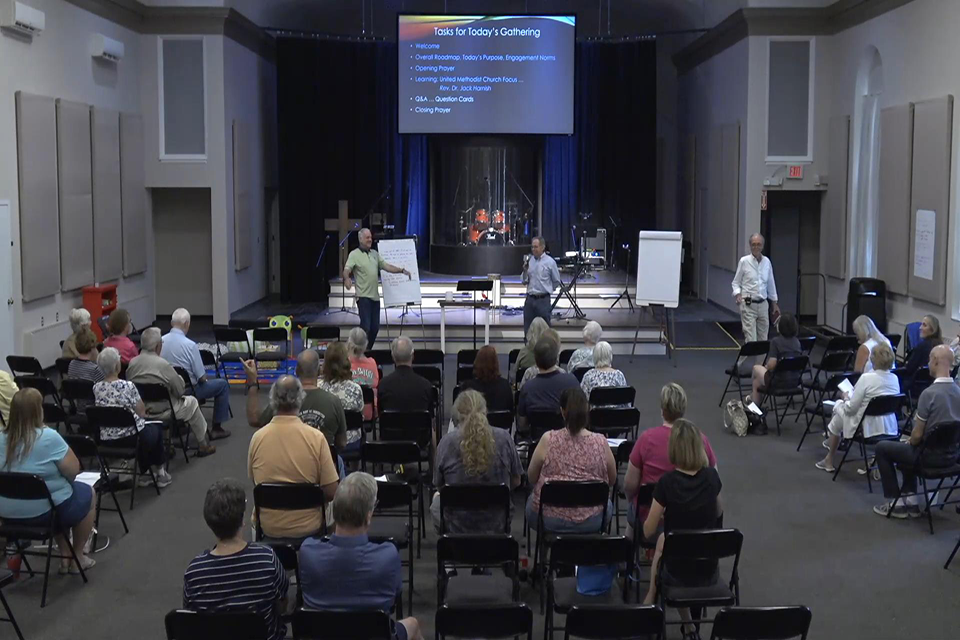 Plymouth: First UMC has been going through a four-phase process of discernment regarding the question of disaffiliation or staying with The United Methodist Church. During phase 2, the congregation participated in information gathering as representatives of both positions were invited to share with the congregation. ~ photo courtesy Rev. Bob Miller

“Maybe God has given us this time to reflect and prepare for what is ahead.” Rev. Geri Hamlen, pastor of Trinity United Methodist Church, Iron Mountain, MI, was commenting on the journey her congregation has made in the past few years regarding the inclusion of gay and lesbian persons and the future of The United Methodist Church. In 2019, prior to the General Conference and the session of the Michigan Annual Conference, they did a congregational survey. With a significant response, 70 to 75% favored a more inclusive stance, while 25 to 30% supported the current disciplinary language, which considers, “The practice of homosexuality is incompatible with Christian teaching.”

In 2022, in reaction to the delay of the next General Conference, some members believed waiting until 2024 for denominational action was unacceptable. “At that point,” Rev. Hamlen said, “we decided to use 2022 for open conversation and reflection.” They shared a variety of videos, information, and resources, and in partnership with the other United Methodist churches in the area, they invited a speaker representing the newly formed Global Methodist Church. Then their District Superintendent shared his views on the future of The United Methodist Church. This year a second survey was less conclusive, so they have decided to hold off any further action until after the 2024 General Conference.

Rev. Hamlen concludes, “Some people are just tired of the whole topic. Others are patiently awaiting the outcome. But perhaps this is God’s gift of time for reflection. In the meantime, I tell my congregation, ‘Let’s just enjoy each other, do good ministry, and share our lives together.’”

First United Methodist Church of Plymouth, MI, has also made good use of the time. Rev. Bob Miller and the Church Council outlined a four-phase process. The first phrase was “Setting the Framework,” identifying ground rules for conversation with a desire to seek credible information and commit to “holy conferencing,” marked by dignity and respect for one another.

Phase 2 was “Information Gathering” with unencumbered presentations regarding the two options: (1) to disaffiliate and join the Global Methodist Church or (2) to remain United Methodist. Representatives of both positions were invited to share but there was no debate, only questions for clarification and information. At the same time, various resources were made available to the congregation.

They are currently in phase 3, the “Conversation” phase. Members were invited to sign up for small group gatherings where everyone could be heard, still affirming the original ground rules for holy conferencing. The gatherings were led by the pastor and the Council Chairperson, who, at this point, shared their personal preferences. Rev. Miller said, “Since we did not want to ’stack the deck,’ we waited until now to publicly state that the Council Chair favors going with the GMC and I intend to remain United Methodist.”

Phase 4 will be an “Update Session” when they will ask, “Where are we now?” Then the Church Council will make a recommendation regarding the next steps, which could include: (1) taking a straw poll, (2) calling a church conference, or (3) taking no action at this time.

“Throughout the process,” Rev. Miller said, “people on both sides have expressed their appreciation for the way we have approached the discussion and the spirit in which it has proceeded.”

“We knew from the beginning,” said Pastor Jeff Jaggers, “that we are a truly diverse congregation, which makes the conversation more challenging.” Since 2019, Rev. Jaggers has been holding town hall meetings when there was something of significance to discuss—for example, the action of the 2019 General Conference, the birth of the Global Methodist Church, and the report of the Michigan Annual Conference. He intends to hold more town hall meetings in 2023 to keep people aware of potential changes but says the congregation does not see the need for action until after the 2024 General Conference. “Of course, there are folks who are anxious about where we will land,” he says, “but I keep telling them to keep praying, stay open, and don’t get ahead of the process as we live through this time of unknowing.”

For many United Methodists and for the denomination as a whole, this does feel like a “time of unknowing.” But as Rev. Hamlen said, “Perhaps God has given us this time for that very purpose.”