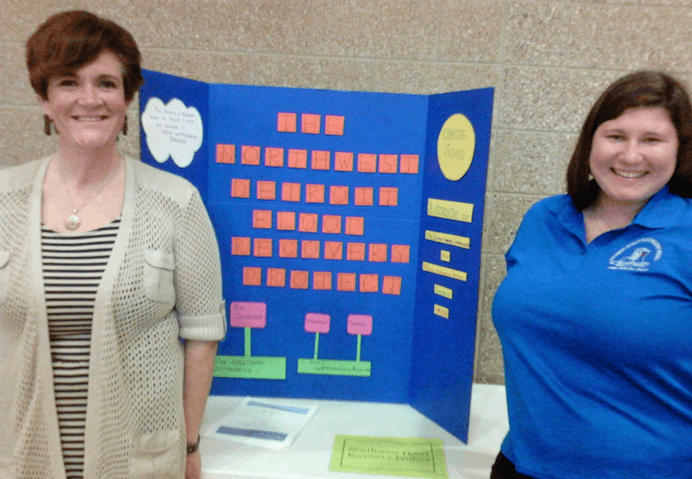 The program has gone by many names. Sixty years ago hundreds of mission-minded young people joined the Fellowship of Christian Service of the Methodist Church. Today [Gen]eration Transformation of the United Methodist Board of Global Ministries involves 99 young adults as Global Mission Fellows. The Northwest Detroit Flood Recovery Project recently welcomed the third Global Mission Fellow to the city. Kayla Flannery joins Chelsea Spyres and Chelsea Williams in ministry in Detroit. The two Chelseas both are serving at the NOAH Project (Networking, Organizing, Advocating for the Homeless) housed at Detroit Central UMC. Today the three of them are at their posts feeding the hungry and rebuilding lives.

At the same time thirteen “young adults” now in their 80s gathered, Sept. 15-17, at Scarritt Bennett Center in Nashville, TN. In 1957 these same young adults trained at Scarritt for the Fellowship of Christian Service, otherwise known as “Threes.” They would leave Tennessee to spend three years in points far-flung around the globe. The group has gathered every five years to look back, but more importantly, to look ahead.

It has been 55 years since they returned to the U.S. from Mexico, the Philippines, Africa, Korea and elsewhere. This will be their last formal gathering.

Many things have changed on the ground between 1957 and 2015. But some things spiritual—like compassion, courage, and hope—have changed very little.

Kayla Flannery is a veteran of many mission trips. As a youth she worked in food banks, animal care shelters and was in ministry with Native Americans through the Sierra Service Project. There was some culture shock involved, however, when she travelled in August from her home in Tucson to Detroit. “We don’t have basements in Arizona!” she laughs. Now she finds herself coordinating volunteers mucking out cellars flooded during the torrential rains in August 2014. “Still, while I have come into an unfamiliar community, I feel like I am at home,” Kayla shares. “And I look forward to walking more closely with my neighbors.”

Kayla reports that she looked at AmeriCorps but a friend who had just completed a term as a US-2 encouraged her to consider Global Mission Fellow as “a good fit.” So after a year of prayer she applied. Kayla became part of a class of 15 GMFs who trained together. “We are a diverse group going into diverse cultures,” she explains. There are three core principles followed by Global Mission Fellows:

Right now Kayla is applying those principles as she coordinates volunteers—individuals and groups—who arrive in Detroit to help with recovery and rebuild.

Right now, with the support of a grant from the United Methodist Committee on Relief, around 50 families are being assisted. Some went through last winter without a furnace. “The flood was so devastating,” Kayla says, “because the basements were not just providing storage but living space to so many people.” Over 130,000 people were left affected in some way after the waters receded.

While UMCOR names the Detroit flooding as the biggest natural disaster in the United States in 2014 in terms of lives impacted, awareness has not been widespread. “I never heard of this back in Arizona,” Kayla admits. While her training focused on things like economic justice, Kayla is seeing abstract issues addressed in very concrete ways in her day to day work.

She says all skill-sets are welcomed. Major tasks are removing debris, dry-walling, and carpeting. Professional, licensed contractors are being employed as needed. But there are plenty of jobs for willing volunteers. Those wishing to assist for a day, a weekend or a week should call Kayla at 313-646-4052.

Life of a Three

Kayla’s term as a Global Mission Fellow is just beginning. Will her life be changed over the next two years? The witness of those gathered at Scarritt Bennett suggests, “YES!”

Unlike Kayla, the Threes were not sent as responders to disasters back in their day. They became nurses, teachers, farmers and social activists in the cultures to which they were deployed. Peggy Hooper, went as a young woman to the then Belgian Congo. Almost 60 years later, she looks back and says, “There was excitement, anticipation and trepidation leaving home for Africa. But once we were immersed in the culture, we grew in faith.” Peggy and her husband, John, raised a family in Wisconsin once back in the U.S. At this end of her mission journey she finds great meaning in her favorite hymn, Hymn of Promise. “From our past will come our future,” she says, “and we have much to be thankful for.”

In 1957 Hoyt Oliver left for Korea. One of his take-aways, explored over the next decades is, “That compassion is the deepest root of all the world’s great religions.” His devotions shared at the reunion focused on the story of Job. By the conclusion of the book “Job is no longer a servant fearing God and avoiding evil,” Hoyt explains. “He opens up to the all-inclusiveness of God’s presence.” Hoyt likened his experience to Job’s: “When we go to others in need we do that because that’s the gift that has been given to us. Who is on the Lord’s side? There is only one side.” He illustrated his point with a sculpture of a continuous Mobius strip.

Paul Van Buren, former missionary to the Philippines, is an example of service that never retires. “Arriving on the shore near Luzon, I could see coconut trees and imagined villages beyond. ‘Here I go!’” I thought.” When his three years were over, he recalls, “I got a lot more than I brought. They taught me how to get things done and to move through society without creating too many waves.”

Paul says his time as a short-term missionary brought him home on a “path to world citizenship.” An ordained Deacon in the United Methodist Church, who was a pioneer in the diaconal movement, Paul notes: “Being a short-termer changed me. “That’s when I first learned that calling is not so much a place and a time but a way of life. We don’t stop when we retire. Calling is the key to making a fulfilled life out of what’s left.”

Adam Shaw served as a Mission Intern first in the Philippines and then in Los Angeles. Mission Intern and US-2 were the immediate predecessors to the [Gen]eration Transformation model launched in 2013. Adam was present at the Threes Reunion.

“Your Fellowship of Christian Service has been rebranded as [Gen]eration Transformation,” he said. Noting that many young people today have been inspired by a missionary, Adam continued, “I feel like I am related to you through the legacy that you have left.”

Adam says that Global Mission Fellows is the current flagship of the Board of Global Ministries. It’s an opportunity to “live into mission from everywhere to everywhere, enabling many to participate in the mission God calls us to.” Those wishing to learn more about this important initiative should explore www.umcmission.org/gt.

In Michigan you can do that “up close and personal” by traveling to Detroit and visiting NOAH and the Northwest Detroit Flood Recovery Project.