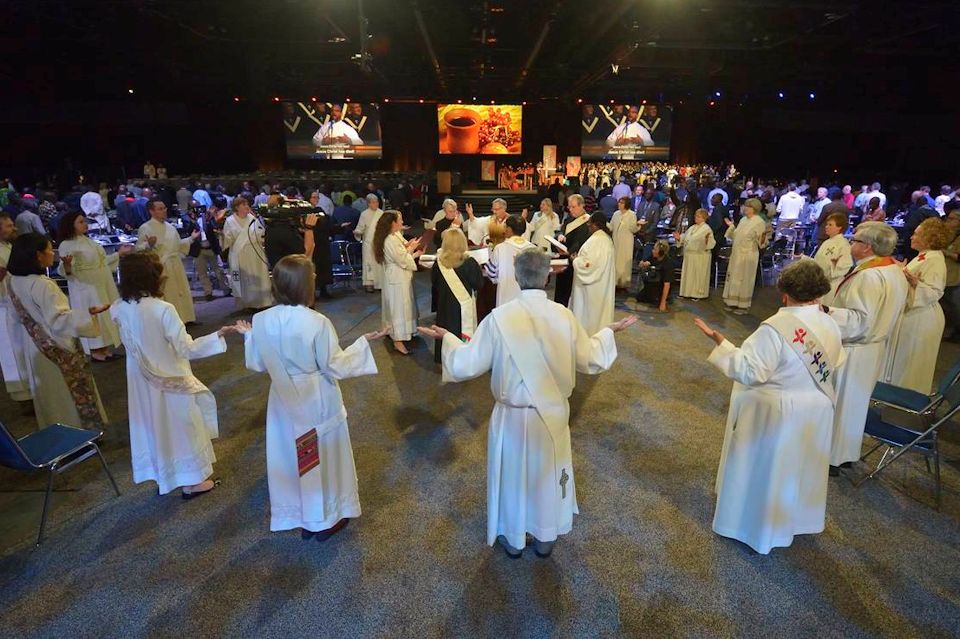 Clergy members bless the elements of Holy Communion during the 2016 United Methodist General Conference in Portland, Ore. The Commission on the General Conference met March 21 to discuss next steps after coronavirus concerns forced the postponement of this year’s legislative assembly. ~ UM News/Paul Jeffrey

GC 2021? Until recently, General Conference was thought to be just three months away. Now it is likely to take place next year. Factors related to COVID-19 are behind the rescheduling of the global event. 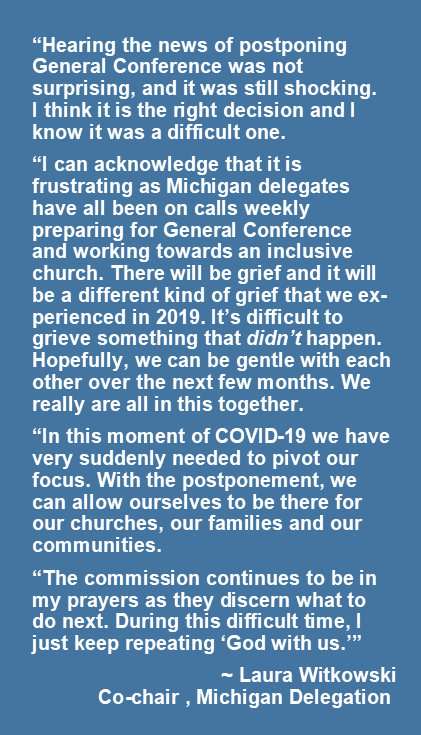 The Commission on the General Conference determined that multiple factors meant it would not be feasible to reschedule to hold the international 10-day gathering this year.

“These issues include the undetermined length of the pandemic, uncertainty around travel bans in different areas of the world, delays in processing visas due to government and business closures and other questions,” Kim Simpson, commission chair, said in a statement.

At this point, the commission does not have specific dates to announce.

However, commission members also resolved that they wanted to keep the next General Conference in Minneapolis. They authorized Sara Hotchkiss, the event’s business manager, to pursue negotiations regarding other dates available at the Minneapolis Convention Center, the original venue for the 2020 General Conference.

“Continuing to work with the Minneapolis Convention Center and area hotels will help us avoid competing with other groups for space in those facilities if they did not already have a contract,” Hotchkiss said in a statement.

Simpson also credited the host team from the Dakotas and Minnesota conferences with being willing to work toward a new date.

The multinational commission held an emergency meeting by teleconference March 21 after the Minneapolis Convention Center, which was to hold General Conference, canceled events into May to reduce the spread of the coronavirus.

Most of the commission’s two-and-a-half-hour meeting took place in closed session to allow members to discuss contract negotiations. Negotiations, “when general knowledge could be harmful to the negotiation process,” are an activity listed as an exception to the denomination’s open-meetings rules.

For meeting participants, the teleconference started as early as 6:30 a.m. on the U.S. west coast and as late as 9:30 p.m. in the Philippines.

At the end of the meeting, the Rev. Gary George, the commission’s secretary, said more details would come on Monday, March 23. That information included next steps for canceling hotel and travel to the previously scheduled General Conference.

“As soon as negotiations are complete, specific dates will be announced,” George said.

In opening the meeting, commission members acknowledged they were dealing with an unprecedented challenge.

“Almighty and loving God, we have made plans and they have been upended,” prayed the Rev. Beth Ann Cook, a commission member. “We are at a loss and feel disoriented, but we know that you are God.”

The spread of the deadly virus that causes COVID-19 has threatened and disrupted lives around the globe and has required people to keep their distance from public spaces.

Cook prayed for the church around the world to respond to people in crisis and especially for health care workers on the front lines of combatting the disease.

As of March 24, Johns Hopkins University — which is tracking cases — reported that the coronavirus had infected more than 398,107 people and killed more than 17,454 worldwide. In the U.S., more than 622 people have died from COVID-19.

Simpson reminded fellow commission members that they are dealing with only one part of the public health crisis.

However, she also acknowledged that planning the 10-day international assembly comes with multiple moving parts that must align. These include securing visas, hotel space, transportation, interpreters and a large-enough venue for a gathering set to draw 862 delegates from four continents and potentially thousands of others.

General Conference typically has met every four years since 1792. But in the past three years, the volunteers who serve on the commission have needed to plan two such large gatherings, including a special General Conference in 2019.

“I do commend you as a commission,” Simpson said. “You have done more in our three years than most commissions do in eight.”

The gathering — the only body that officially speaks for the entire United Methodist Church — is responsible for many crucial decisions. These include electing members of the Judicial Council, the denomination’s equivalent of the Supreme Court, and voting on the four-year budget that funds denomination-wide ministries.

Bishop Thomas Bickerton, the Council of Bishop’s representative on the General Conference Commission, said the bishops are discussing with their chancellor the ramifications of the constitution’s four-year requirement.

“We are cognizant of those issues and are exploring those at this point,” he said.

He and other bishops urged the postponement because of the coronavirus and related travel restrictions.

In this time of pandemic, it remains unclear how many other United Methodist gatherings can go on as planned.

United Methodists in the Philippines, Côte d’Ivoire, and Germany already have postponed 19 annual conferences indefinitely. The Judicial Council, which like General Conference was set to meet in Minneapolis, also postponed its spring meeting because of the ongoing threat.

Whatever happens, Simpson spoke with confidence that General Conference organizers are up to the challenge.

“We are strong people, and we are fit for what comes ahead,” she said at the meeting’s end. “And I hope we’ll all come together, as we’ve done in the past, to try to find the best way to bring the vehicle for General Conference.”