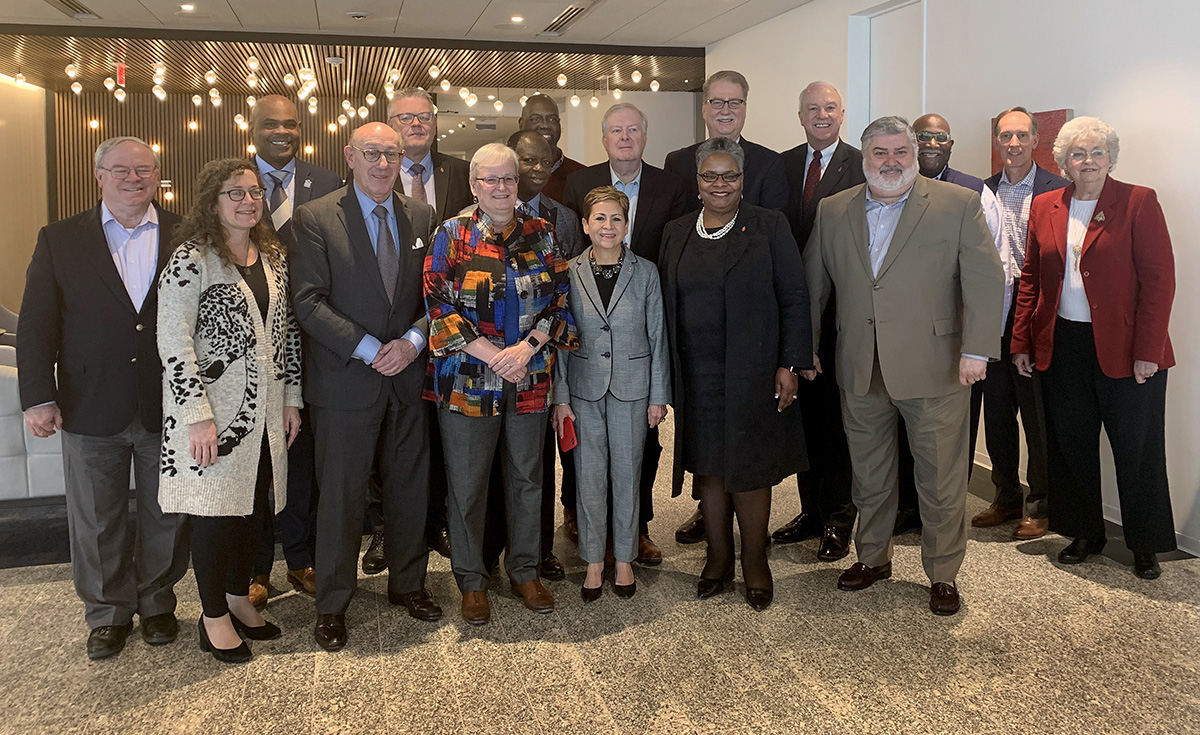 Members of a diverse group of bishops and other United Methodist leaders gather for a group photo in Washington after reaching agreement on a proposal that would maintain The United Methodist Church but allow traditionalist congregations to separate into a new denomination. Photo courtesy of the Mediation Team.

On January 3rd, a diverse, 16-member team of church leaders, offered a separation proposal that would preserve The United Methodist Church while allowing traditionalist-minded congregations to form a new denomination.

SAM HODGES
UM News
Jan. 3, 2020 -- A diverse, 16-member group of United Methodist bishops and other leaders has offered a proposal that would preserve The United Methodist Church while allowing traditionalist-minded congregations to form a new denomination. The separating group would get $25 million in United Methodist funds and would keep its local church properties.

Details are in a 9-page “Protocol of Reconciliation & Grace Through Separation,” released January 3 along with a Q&A and press release.

The proposal - reached with the help of famed mediator Kenneth Feinberg - requires approval by the 2020 General Conference. Drafting of legislation is still underway for the legislative assembly, which is the only body that speaks for the 13 million global denomination.

But given the broad, influential coalition involved – including bishops from around the global connection and advocacy group leaders often sharply at odds - the potential seems strong that the separation proposal can end or at least greatly reduce the denomination’s decades-long struggle over how accepting to be of homosexuality.

“It became clear that the line in the sand had turned into a canyon,” Bickerton said. “The impasse is such that we have come to the realization that we just can’t stay that way any longer.

“This protocol provides a pathway that acknowledges our differences, respects everyone in the process and graciously allows us to continue to live out the mission of making disciples of Jesus Christ for the transformation of the world, albeit in different expressions.”

The traditionalist Wesley Covenant Association already has taken steps toward forming a new denomination, such as drafting a book of policies and doctrines. Bickerton and the Rev. Keith Boyette, WCA president, said the negotiating team’s assumption is that the new church would emerge out of the WCA.

Boyette was part of the group reaching the proposal. He said traditionalists have long felt that divisions in The United Methodist were irreparable and that an amicable separation was the best way forward.

“I believe this is a fair and equitable solution that puts decades of conflict behind us and gives us a hopeful future,” he said.

Also negotiating and signing onto the agreement was Jan Lawrence, executive director of Reconciling Ministries Network, which has long sought to remove restrictions against LGBTQ participation in the denomination.

“As a United Methodist who is LGBTQ, my priority at the table was to make sure we addressed the full participation of LGBTQ people in the life of the church, making sure the answer was not `ask us again in 2024,’” she said. “The language needs to be removed now. I am pleased that there is an opportunity here for that to happen in 2020.”

The new proposal would allow other United Methodist churches to form their own denominations while foreseeing ecumenical agreements and cooperation on some fronts.

Representatives of traditionalist, centrist and progressive advocacy groups joined with a handful of bishops from the U.S., Africa, Europe, and the Philippines to reach the agreement. They promised to support it and no other.

“We humbly offer to the delegates of the 2020 General Conference the work which we have accomplished in the hopes that it will help heal the harms and conflicts within the body of Christ and free us to be more effective witnesses to God’s Kingdom,” said Bishop John Yambasu of Sierra Leone, who last summer began the private talks that led to the proposal.

The group had the help of Feinberg, who oversaw the victims’ compensation funds after 9/11 and the BP Deepwater Horizon oil spill disaster.

Feinberg donated his time, as did other lawyers who helped the group.

“(Feinberg) has a deep interest in religion and the preservation of the public witness of religion, and this is what intrigued him and enabled him to say `yes’ to us,” Bickerton said. “We are extremely indebted.”

Feinberg called it “an honor and a privilege” to be part of the negotiations.

“As a result of weeks of intense, voluntary mediation in Washington – ably assisted by Richard Godfrey and Wendy Bloom of the distinguished Kirkland & Ellis law firm – and with the intense, direct and ongoing participation of all church representatives, a comprehensive resolution of all issues and principles has been achieved,” he said in a statement.

A clear catalyst for the negotiations was the 2019 General Conference, which saw passage of the Traditional Plan reinforcing restrictions on same-sex weddings and ordination of LGBTQ persons - but also igniting passionate, ongoing resistance in the U.S. by full inclusion supporters.

The tougher enforcement provided by the Traditional Plan went into effect January 1, but the new proposal calls for holding “in abeyance” any administrative or judicial processes related to same-sex weddings or ordination of gay clergy.

Key elements of the group’s proposal include:

Though the petition deadline for the 2020 General Conference is months past, church rules allow for special annual conference sessions to consider submitting additional petitions. Bickerton noted that some such sessions are already planned for the weeks ahead.

The group behind the new proposal has asked the Council of Bishops to request that the Judicial Council consider the constitutionality of the still-being-developed legislation before the opening session of the 2020 General Conference.

The group also wants the Council of Bishops to seek a report from GCFA on the financial impacts of the proposal.

“The United Methodist Church will be smaller. The church will need to quickly assess the impact of churches leaving and adjust infrastructure and spending accordingly. The long-term solution lies in the broad reform that is needed.”

Various plans for dramatically restructuring or breaking up The United Methodist Church are already headed to the 2020 General Conference, and a range of behind-the-scenes talks about the denomination’s future have been underway.

Yambasu organized a meeting in Chicago on July 19, 2019, that brought central conference bishops together with five representatives each from the traditionalist, centrist and progressive camps.

A smaller group met August 16-17 at Floris United Methodist Church, in Herndon, Virginia, to start the mediated negotiations that led to this new proposal. The group would expand, mostly with bishops, as the process continued.

Council of Bishops President Kenneth Carter was among the far-flung episcopal leaders who joined in discussions and signed the agreement. So did Yambasu from Africa, Bishop Rudy Juan from the Davao Area in the Philippines and Bishop Christian Alsted from the Nordic-Baltic Area in Europe.

Boyette and Patricia Miller represented the coalition of traditionalist groups that includes the WCA, Good News, the Institute on Religion & Democracy and the Confessing Movement. Lawrence and the Rev. David Meredith were there for RMN, Methodist Federation for Social Action and Affirmation, and Meredith is listed in the protocol as a member of the UM Queer Clergy Caucus.

Those in the room consulted with “outer circle” advisers, as well as financial experts.

All of those signing the protocol agreed to support the development and implementation of enacting legislation.

“The fact that we were able to come together from across the world, from across theological spectrums and define an opportunity to collaborate for the sake of the church we all love is a monumental thing,” Bickerton said.

He added: “My hope would be that the delegates to the General Conference would be able to employ that same spirit as they undertake their work in Minneapolis.”

A live-stream panel discussion with members of the Mediation Team will be held on Monday, January 13. Additional details will be provided in the days ahead.

Signatories to the Protocol

The plan looks toward a restructuring of the remaining global United Methodist Church into regions, with the flexibility to adapt church policies, including on LGBTQ inclusion.

Meanwhile, traditionalists forming a new denomination could continue what they see as Bible-supported restrictions on same-sex marriage and ordination of gay persons as clergy.