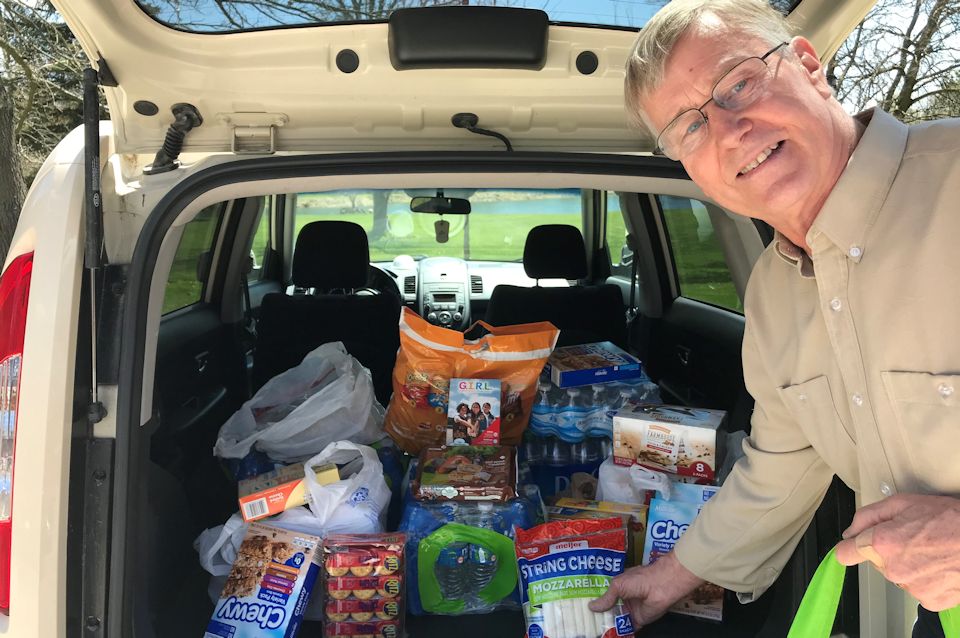 Tom Snyder, a deacon on the staff of Dexter United Methodist Church, is caring for the homeless in Ann Arbor during the health crisis. ~ photo courtesy Tom Snyder

Tom Snyder, a Deacon at Dexter United Methodist Church, is serving as a bridge between resources and needs of the homeless in Ann Arbor. “I like DOING Christianity,” he says.

In the ‘80s I was the pastor at Dexter United Methodist Church. One year we were preparing the Christmas Eve bulletin and needed filler, so we inserted an announcement about the district mission team to Haiti, never really expecting anything to come from it. To my surprise, Tom Snyder, a young home builder, decided to go.

The week after his first trip to Haiti, Tom came to my office with tears in his eyes and said, “I’m a mess.  I can’t sleep, I can’t eat, all I can think about are those kids in Haiti. I don’t know what to do.” What he did was go back again and again—now having made over 40  trips to Haiti, Belize, Costa Rica, Rwanda, Kenya, and Guatemala.

Eventually, he left his business, went to seminary, and become ordained as a Deacon. Today Tom is fulfilling the ordination of the Deacon to lead the church in servant ministry in the world.

Most recently, that passion for service led Tom and the Dexter congregation to another mission field—caring for the homeless in Ann Arbor during the pandemic. When the shutdown went into effect, almost overnight, the Delonis Center in Ann Arbor faced a crisis since many of the churches which typically house homeless families on a rotating basis were unable to continue.

When they talked with Tom, he bounced things off of Senior Pastor Matt Hook, and they contacted Calvary UMC  in Ann Arbor.

Calvary UMC was not meeting as a congregation due to the COVID-19 guidelines; the building was not being used.” Tom talked with the Rev. Mary Loring, the pastor at Calvary, and together they moved forward into a new ministry, providing space for the Delonis Center program. The Delonis staff manage the shelter, and the Dexter congregation stepped up to provide food, water, and the use of its van to transport residents between the Center and the shelter in the former Calvary Church building.

Ed Weir, a long time member of the Calvary congregation, has provided help with the building. Other churches and groups have offered their support as well.

Also, Tom garnered the support of Holiday’s Restaurant who donates lunches for the 20+ people staying at the shelter. Rob TerBush, the owner of Holiday’s, says, “Tom and the church reached out to me asking if we were going to remain in operation and be available to help. The answer was, “Yes.”

Snyder says, “The beautiful thing has been the partnership in ministry with other churches, restaurants, and a student group from Eastern Michigan University. It is wonderful to see how we all can band together to help each other, even in times of “social distancing.”

A significant part of Deacon Snyder’s ministry today is gathering the collection of donations at the Dexter Church, then going to Holiday’s for a pick-up, and delivering the supplies to the shelter. Tom says, “We collect money, masks, snacks, and water. Some days there is more than others, but there is always enough … kind of like the loaves and the fishes.” His latest missional task was cleaning out a blocked sewer! “Ministry means you just do what you need to do,” he said.

Sometimes, like Tom Snyder and the Dexter Church, we go to find the mission field in Haiti or around the world. At other times, the mission field comes to us in the form of needs in the community. However it comes, it is the opportunity for servant ministry, like sharing loaves and fishes, in the name of Jesus Christ. Snyder says, “I like DOING Christianity. To get out and meet people, hear what they have to say, and then maybe be able to do something for them.  That’s where it comes alive for me.”  That’s when ministry comes alive in the world as well.