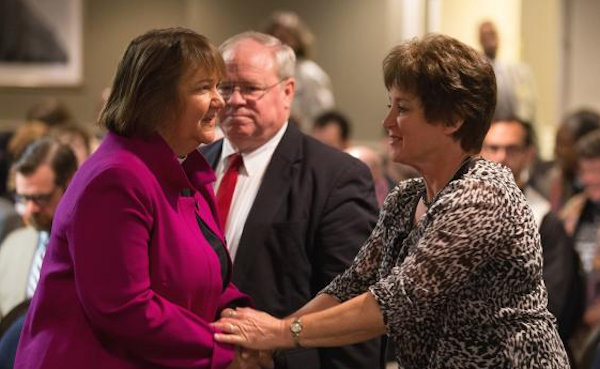 Bishop Karen Oliveto (left) meets Dixie Brewster (right) for the first time prior to the opening of oral arguments before the United Methodist Judicial Council meeting in Newark, N.J. Brewster is petitioner questioning whether a gay pastor can serve as a bishop in The United Methodist Church. At rear is the Rev. Keith Boyette, representing Brewster before the council. ~umns photo/Mike DuBose

Judicial Council weighs legality of election of openly gay bishop in The UMC.

Was last July’s election of a gay bishop by United Methodists in the denomination’s U.S. Western Jurisdiction a violation of church law or a legal elevation of a clergy member in good standing?

Representatives of both positions argued their case before the United Methodist Judicial Council, the denomination’s top court, during an April 25 oral hearing.

Although she was not named in the motion for a declaratory decision submitted to Judicial Council, the focus was squarely on Bishop Karen Oliveto, the denomination’s first openly gay bishop. Oliveto, elected in July, currently serves as bishop of the Mountain Sky Area, which encompasses Colorado, Montana, Utah, Wyoming and a church in Idaho.

The 9 a.m. hearing — which lasted nearly three hours, including a break — drew about 200 people to the Hilton at Newark Penn Station, some of whom sang, worshipped or held communion before or after the hearing.

Those seated in both the main hearing room and an overflow room equipped with a closed-circuit broadcast listened quietly and attentively. It was the only portion of the council’s April 25-28 meeting open to the public, but N. Oswald Tweh Sr., president of the Judicial Council, thanked the church for its “prayerful support” during his opening remarks.

Oliveto was present at the hearing, along with other bishops of the Western Jurisdiction, staff from her jurisdiction and a large group of supporters.

Also present were others interested or concerned about how Judicial Council might rule in the case — including Dixie Brewster, the petitioner and a lay representative to the 2016 South Central Jurisdictional Conference, whose motion initiated the proceedings.

The petition on the Western Jurisdiction episcopal election is one of seven being considered by Judicial Council this week. No decisions will be released until the meeting has concluded.