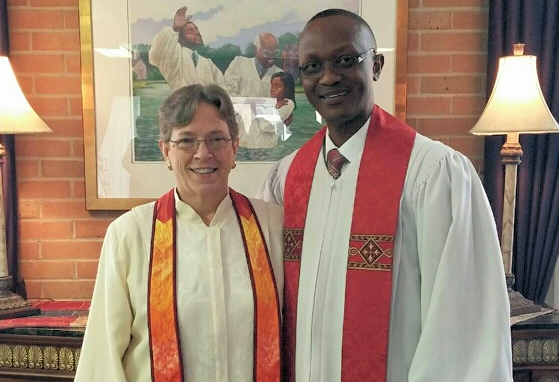 On September 20 the Rev. Dr. Charles Boayue, Jr. was installed as the Superintendent of the Detroit Renaissance District. He joined Bishop Deborah Lieder Kiesey's Cabinet on July 1.

Two new District Superintendents have been officially welcomed to service in the Detroit Conference.

In ceremonies held on September 13 at Mayville United Methodist Church, the Rev. Elizabeth Hill was welcomed as the spiritual leader of the Blue Water District.

Hill moved from Memorial United Methodist Church in Gladstone to her office in Ft. Gratiot on July 1. When the appointment was initially announced, Bishop Deborah Lieder Kiesey said: “I look forward to having Elizabeth join the Detroit Cabinet. She is passionate about rural and small church ministry, and has shown great effectiveness in all the places she has served.”

Hill served as Senior Pastor at Gladstone Memorial UMC from 2010 to 2015. Previously she served at Embury UMC in Birmingham and St John’s

UMC in Royal Oak. She holds a Masters of Arts from Eastern Michigan University and in 2006 received her Master of Divinity from The Methodist Theological School in Ohio.

On September 20 the Detroit Renaissance District installed their new Superintendent, the Rev. Dr. Charles Boayue, Jr. during worship at Southfield Hope UMC. Boayue left his pulpit as Senior Pastor of Detroit Second Grace UMC on July 1 to take over duties from his desk at Detroit Metropolitan UMC.

“Charles brings many and varied gifts to the Detroit Renaissance District,” said Bishop Deb. “He is a man of deep faith and creativity and with his love

of the city of Detroit, I have no doubt he will continue the good ministry he has planted in the district.”

Boayue’s life began in Liberia, where he was born in a United Methodist Church hospital at Ganta. His church appointments include Associate Pastor at Detroit: Metropolitan UMC (1990-1992); Senior Pastor at Jefferson Avenue UMC (1991-1993); Associate Council Director– Urban Missioner (1993-1999). Boayue earned an MBA at Florida Southern College and a Master of Divinity at Duke Divinity School. He received his Doctorate in Theology at United Theological Seminary. He was the first clergyperson elected to the 2016 General Conference and will serve as the chair of the Detroit Conference Delegation going to Portland in May of next year.