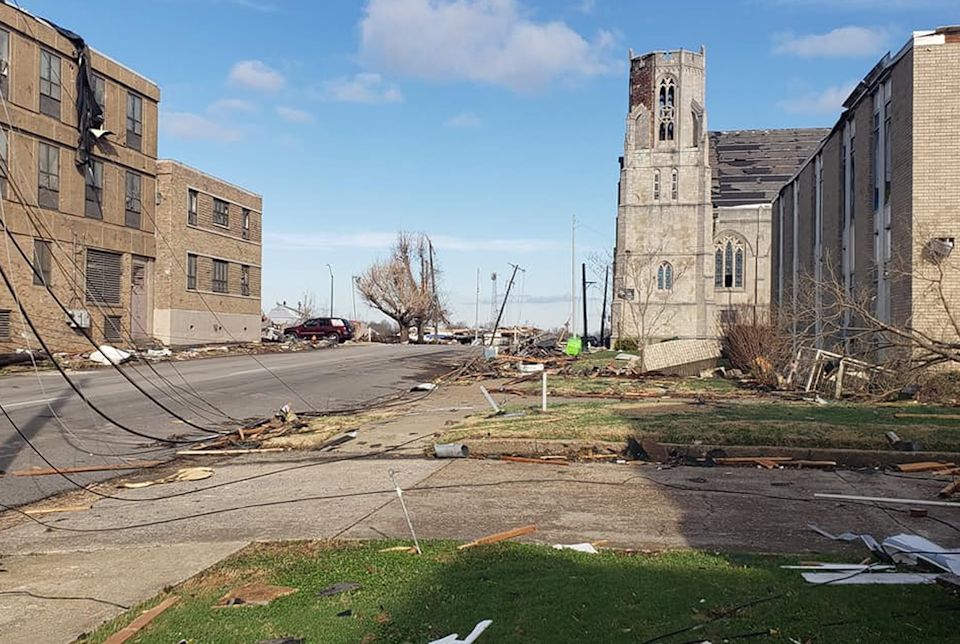 December 16, 2021 | ATLANTA — “For a long time, we’ve talked about how discipleship is forged in a crucible of suffering,” the Rev. Joey Reed, lead pastor at Mayfield First United Methodist Church in KY, told CBS News when talking about the December 2021 tornadoes. “After that suffering is acknowledged…after we have mourned our losses and start to let go of the things that mean so much to us, we can move into a bright future where we are helping our neighbors.”

The United Methodist Committee on Relief is already taking action to make that bright future possible.

Update: UMCOR appreciates the tremendous outpouring of support for those impacted by the December 2021 tornadoes. As with any disaster, it is important not to travel to an affected area to offer assistance or send supplies without an invitation from the Conference Disaster Relief Coordinator.

We have been informed by the CDRCs in both the KY and the WKY-TN United Methodist annual conferences that they have enough supplies and their warehouses are at capacity. At this time, they are unable to accept any more material donations of any kind. Excess supplies will lead to logistical challenges and distract from current response efforts. Conference Disaster Relief Coordinators will communicate when additional help and what kind of help is needed throughout the long recovery process ahead.
In the interim, we invite you to continue to pray for the communities, survivors and pastors in the areas. Show your support through UMCOR’s U.S. Disaster Response and Recovery Fund. Donate online here.

Mayfield, which is now well-known because of the dramatic images documenting the damage it sustained, is one of the communities in eight states devastated by the recent disaster. More than 60 tornado reports were recorded in Arkansas, Kentucky, Tennessee, Illinois, and Missouri on Friday night and Saturday morning, December 10-11, according to the National Weather Service.

In the moments after the storm, Lara S. Martin, director of U.S. Disaster Response for UMCOR, was in contact with conference disaster response coordinators serving the impacted regional conferences. The CDRCs had each received training from UMCOR and were already responding to the situation.

As part of its mission, UMCOR supports its local partners with education, training, resources, volunteers and access to materials that help them lead disaster response and recovery efforts. The district DRC for the Mayfield area was onsite the day after the storms.

Days after the storm, at the request of the Arkansas, Kentucky, and Tennessee-Western Kentucky conferences, UMCOR awarded solidarity grants to enable them to assist with the immediate needs of survivors, many of whom are now without food, shelter and clothing. These grants offer flexibility to the conferences in responding to needs as they emerge. In addition, as damage assessments are completed and recovery plans put in place, UMCOR is prepared to extend this response.

“Based on the initial assessments and UMCOR’s experiences with hurricanes Katrina, Sandy, Irma, and Maria, we predict this will be a very long-term recovery effort,” said Martin. “When we say UMCOR is ‘early in, last out,’ it is because long after a storm has gone away, UMCOR is there providing the case management services survivors need to access government resources that enable them to rebuild their lives.”

“As search and recovery efforts are still ongoing, we encourage anyone interested in helping not to self-deploy but instead to wait for updates on how and when to engage,” Martin told UM News. “Until then, we invite continued prayer and the support of survivors through donations to Advance #901670. As rescue efforts shift to response, UMCOR stands ready to journey with the affected conferences from the chaos of this week’s disaster toward a holistic, multiyear, long-term recovery.”

Roland Fernandes, general secretary of UMCOR and the United Methodist Board of Global Ministries, said UMCOR stands with the people in the tornadoes’ paths.

“We grieve alongside those who experienced sudden and deep loss in the aftermath of this weekend’s destructive storms — loss of life, loss of home, loss of community,” he said. “UMCOR remains steadfast in both prayer and support for the many states that are navigating immediate relief efforts and is ready to accompany communities on the long road toward healing.”

Rev. Reed, who with his wife took shelter in a closet in the basement of First United Methodist Church, said that during the time spent there he thought it “might be the last few moments of my life on this earth.” As they emerged from the church after the storm and saw the destruction, they realized they were blessed to be alive and awed by what God had seen them through.

UMCOR’s staff and network of volunteers are committed to helping people like Reed and his family who have lived through this harrowing experience.