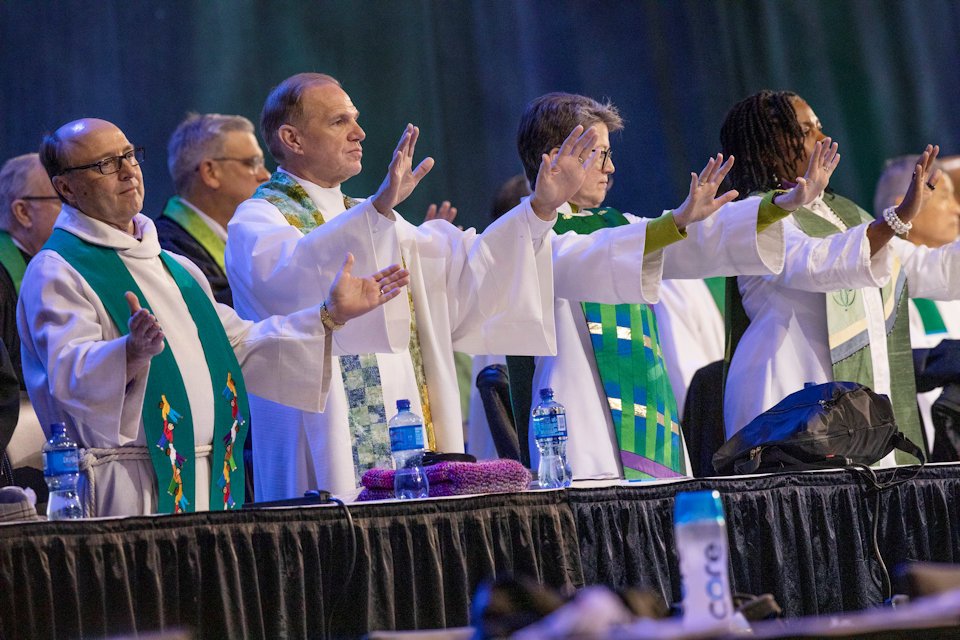 Bishop David Bard describes the recent rulings of the Judicial Council of The United Methodist Church and outlines possible next steps between now and the 2020 General Conference in Minneapolis.

Following General Conference 2019, the petitions associated with the Traditional Plan which were approved by that body, along with a petition regarding local church disaffiliation from an Annual Conference which was also approved, were sent to the Judicial Council for review. At their meeting last week, the Judicial Council ruled that some of the Traditional Plan petitions passed by the General Conference were constitutional and some were not.

For more information, you may read the United Methodist News Service article about the rulings, and Bishop Ken Carter’s summary of the rulings on behalf of the Council of Bishops. The UMNS article provides a link to the rulings themselves.

These rulings reinforce The United Methodist Church’s current stance on human sexuality and the limitations for LGBTQ persons to be married by our pastors or in our churches or to be eligible for licensing, ordination and appointment. Many LGBTQ persons, their families, and friends find this stance hurtful and harmful. In addition, the legislation passed and now found constitutional adds specifications to the complaint process that some view as deeply punitive. Some among us, then, had the feelings of disappointment, hurt and discouragement felt immediately following General Conference reawakened.

Others among us believe that the church in these decisions is being faithful to the long-standing witness of the Bible and the church.  Such diverse responses reveal starkly the depth of our divisions.

“Such diverse responses reveal starkly the depth of our divisions.”

Expectations for this work of the Judicial Council were high, in some cases unreasonably so given that the Judicial Council was not going to change the basic stance of our denomination. Anxiety about this meeting was high and remains so following the decision.  What might the future look like?

It may be helpful for each of us to step back for a moment and seek a wider-angle view.

The Judicial Council decision has not markedly changed the trajectory of differing groups within The United Methodist Church. Traditionalists who are in accord with the Wesleyan Covenant Association and other groups have pledged to continue to work to strengthen the Traditional Plan as they prepare for the 2020 General Conference in Minneapolis. They will seek to revise petitions from the Traditional Plan found unconstitutional to make them constitutional.

At the same time, a number of more Centrist and Progressive persons and groups have pledged to resist the Traditional Plan in different ways and to work to change it as they prepare for the 2020 General Conference.  It would seem there are forces within The United Methodist Church destined to collide again, and soon.

“We cannot simply keep moving into the future as we are now.”

What has become clear to many, including me, is that more space is needed between persons within The United Methodist Church. We cannot simply keep moving into the future as we are now. It will only generate increasingly intense cycles of reactivity. There are a number of ways we might describe what “more space” looks like amicable separation, a new connectionalism, new Methodisms, a new form of unity, mutual blessing and sending.

If we would like to see General Conference 2020 look different from General Conference 2019 when it comes to considering the inclusion of LGBTQ persons, then we would do well to seek some kind of negotiated plan to create more space prior to that General Conference which could then be ratified by that body. There are a number of significant conversations taking place that could contribute to such a negotiated plan, including the conversation taking place at Church of the Resurrection in Kansas City, May 20-22 which includes clergy and laypersons from across the United States. I will be there as well. I have also been in conversation with other bishops in less formal settings discussing the future of the church.

This is where we are, and the Judicial Council decision is part of this long story. The question before us is how we will live together in this uncertain and in-between time.  We can make choices about ministry shares. I would encourage continuing participation in connectional giving so as to keep the church strong as we move into a new future. Weakening the church now only weakens what may emerge. We can choose to turn up the temperature by sharing our viewpoints in words that wound and in actions that generate more anger and anxiety. We can choose to see caricatures of each other rather than see each other. On the other hand, we can choose to be more thoughtful and less reactive. We can choose to live into the future by seeing how we can bless each other now, while we are together, even as we anticipate some parting of the ways, some greater space between us.

“We can choose to live into the future by seeing how we can bless each other now.”

Regardless of my own viewpoint on LGBTQ inclusion, which has been clear in my support of more space for LGBTQ persons in the life and ministry of the church as represented by the defeated One Church Plan, I remain and am committed to being the bishop for all United Methodists in Michigan. We need not agree about everything for me to support the good work you do in ministry as clergy and lay people, to celebrate with you your joys, professional and personal, or to mourn your sorrows.

When the time comes that we might have to extend the hand of Christian fellowship to each other in a wave goodbye, we will cross that bridge then. In the meantime, I will offer my best to you and to Jesus Christ as bishop of the Michigan Area. By the grace of God and the power of God’s Spirit, I will lead with as much wisdom, compassion, kindness, and joy as I am capable of.

Moving into the future along different roads is not a first for the communities of people who follow Jesus.  “The disagreement became so sharp that they parted company; Barnabas took Mark with him and sailed away to Cyprus.  However, Paul chose Silas and set out, the believers commending him to the grace of the Lord.” (Acts 15:39-40)

“Ministry needs to be done and, thanks be to God, is being done.”

We are in a challenging and difficult time as The United Methodist Church. We are in an uncertain and in-between time. Two moments from the first book in our Scripture tug at my soul. “Abraham took his last breath and died after a good long life, a content old man, and he was placed with his ancestors. His sons, Isaac and Ishmael, buried him.” (Genesis 25:8-9a, CEV) “Isaac took his last breath and died. He was buried with his ancestors after a long, satisfying life. His sons, Esau and Jacob, buried him.” (Genesis 35:29, CEV)  It is not the images of death which speak to me, rather the images of brothers, often-estranged, standing together in shared memory and shared grief.  In this moment we are together with a deeply shared history. Soon we may go other ways. Might we work to bless each other even as we work out this new thing that needs to happen?

My prayer for us remains that God would enlarge our hearts, enliven our minds, expand our imaginations, make gentle and generous our spirits, and renew our commitment to the mission of the church.