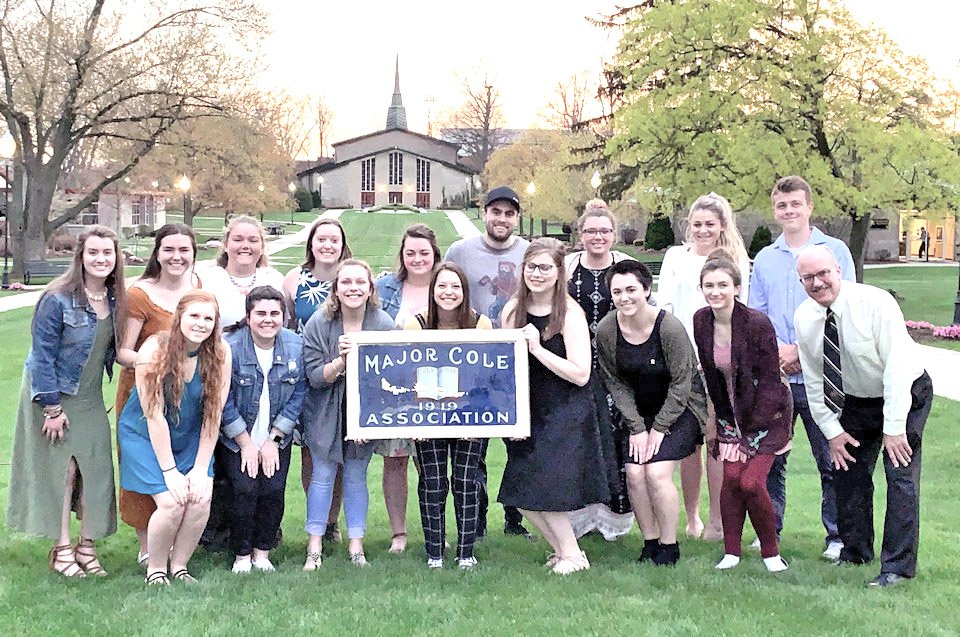 The Rev. Chris Momany (right) joins students on the Adrian College lawn. The “Major Cole” vocational discernment group is named after a Civil War officer from Adrian who guided the organization in the late 1800s. Momany had his last meeting with the group in April 2019. ~ photo courtesy Chris Momany

The Rev. Chris Momany, Chaplain of Adrian College since 1996, shared this inspiring message with the Class of 2019 at the Baccalaureate Service.

In the spring of 1980, on a rainy day, I was traveling home from a family vacation in Tennessee, and while we were still in southern Michigan, my mother suggested that we visit a small college near the Ohio state line – Adrian College.

I was planning to attend a different institution but figured it was easier to humor mom. We pulled up to this campus and received one of those walking tours, complete with black and gold umbrellas. I went back home and changed my mind. I decided to attend Adrian College.

If college is about nothing else, it is about identity formation. And I had no clue when I began my undergraduate studies. I was an athlete in high school, captain of my team – a very good team that beat the reigning state champs early in my senior season and then lost to them in the finals. But I really had no mentors in my corner when it came to academic endeavors. I was a jock with massive amounts of intellectual insecurity.

Then I came to Adrian College and found several professors who believed in me before there was credible evidence for doing so. They did not put me in a box or write me off. They did not view me through the shallow stereotypes of my high school culture. They liked that I read, that I studied, that I spent time in the library, and that I took my ideas out for a drive in papers and in classroom discussion. They believed in my mind. And the funny thing about people believing in you before you believe in yourself is this: pretty soon you start to think of yourself the way they do. After all, they were bright people. Maybe they know something about me I never had the courage to encounter. The best educators always get out front of our self-understanding. They are always seeing us as we can and will be.

“And the funny thing about people believing in you before you believe in yourself is this: pretty soon you start to think of yourself the way they do.”

The world is full of clichés about living in the moment, but I never understood what that meant. And I am not suggesting that we race toward oppressive deadlines. I am simply saying that one definition of grace is experiencing today what others see for our future.

Case in point: the prophet Jeremiah. Jeremiah’s prophecy names the way the law of God will be written on the human heart. This is not a challenge for people to try harder, do better, strive more. It is a promise of the way things will be for those who love God.

Jeremiah is often called the “weeping prophet.” He wore his heart on his sleeve, but the nickname is inaccurate. It makes him out to be a whiner, a complainer. Jeremiah was no whiner. He lived during a time when his nation was arrogant about its prowess, its might, and he found this disgusting because such bravado was built on sand. The great Babylonian army was at the gate, and they threatened destruction of Jeremiah’s people. The prophet did not believe the claims that his nation was too great to fall. He knew they were in trouble, primarily because they placed their trust in wealth and human power. Jeremiah was not a whiner. He was a pain in the neck. He knew that superficial strength is no strength at all, and people did not want to hear this message.

When Babylonia crushed Jeremiah’s nation like an insignificant bug, the previously arrogant people freaked out. “Everything is lost,” they cried. But then Jeremiah did something odd. In the middle of worldly disaster, he went and bought a plot of land, a field and started planning for the future. Did you get that? Jeremiah – the terminal pessimist when the popular crowd believed in its own power – became a deliberate believer in the future when the only thing left was God’s power. He was always out front of the crowd. The days were coming when God would make a new covenant with the people – write it permanently on the heart. A world of love and commitment.

This is the focus of Matthew 5:1-12 – the Beatitudes. These are not so much impossible demands for living as they are promises – visions of a certain future. The brokenhearted, the meek, the hungry, the merciful, the pure in heart, the peacemakers know that in God’s economy human wealth and power and appearance are absolutely worthless – even as each and every person is, as we say at Adrian College – of intrinsic worth. That is not a threat. It is a promise.

The future of God is one of love and affirmation. We may get kicked in the teeth on our way to this destiny, but it is no less real. Friends: live this future today. Live like it is real – now. Graduates, don’t buy the culture’s calculus of value. Embrace the vision that is only out there because we have not yet developed the courage to make it real inside.

When I was starting out as a pastor, the United Methodist Church appointed me to a rural community where three small churches were merging to become one. These were difficult economic times, and these modest folk were not rich. But that group of people went out, like the prophet Jeremiah and bought a piece of land for their new ministry. It would be a home for reaching out to all in the name of Jesus and his love.

“Be the person who sees others as they can be, as they already are in the eyes of God.”

As most groups do when they have big plans, this gathering of faithful people planned for a temporary sign that would read: “Future Site of New Hope United Methodist Church.” A local man who meant well built a sign and painted it. There was one problem. When he finished, it read: “Future Sight of New Hope United Methodist Church.” His spelling error did not go unnoticed, and many in the community began to ridicule this well-meaning soul. It was an embarrassment. What would people think of the church?

Then one day a very gentle man, a dairy farmer, saw something more in that sign and quietly got in his pickup truck and drove out to the property. He took a brush and a can of paint and made a very, very slight alteration to the sign. He put quotation marks around the word “Sight.” Suddenly the ridiculed, embarrassed builder of that sign was transformed into a visionary, someone with the faith and the presence of mind to see the future that ministry promised.

I think of the courage it took to buy that piece of property, against all contemporary evidence. But I also think often of that caring man and his act of grace, his getting out ahead of others, his ability to see in this belittled man something more. Folks, be the person who puts affirming quotation marks around the lives of others. Be the person who sees others as they can be, as they already are in the eyes of God. That is living tomorrow’s life today.

~ The Rev. Christopher Momany, who is leaving his post as chaplain at Adrian College after more than 23 years, delivered this baccalaureate sermon about the importance of vision in the church and academia.