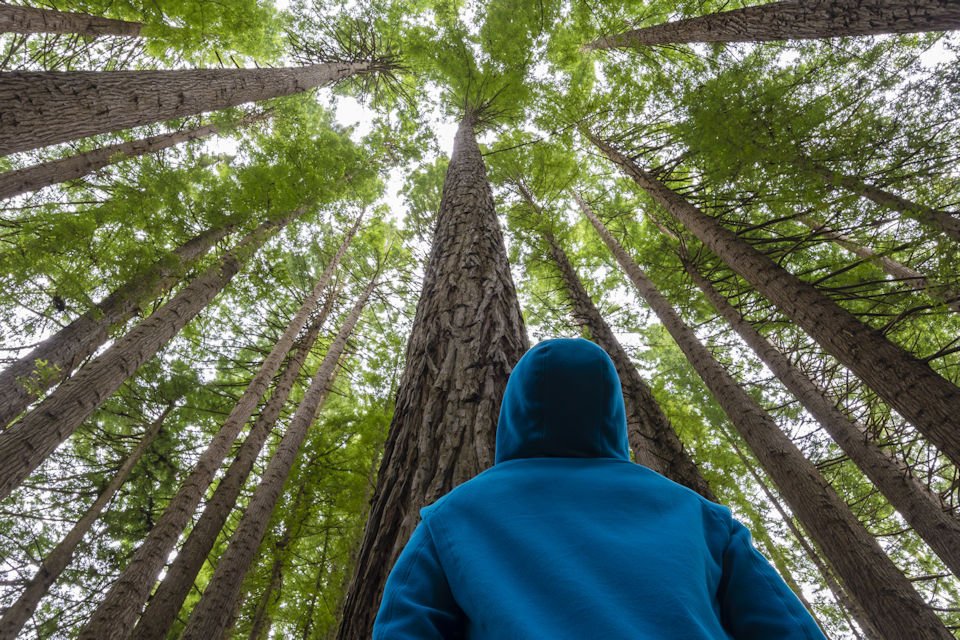 The Rev. Glenn Wagner reflects on years gone by in his neighborhood, and mourns the passing of a giant beech tree that had witnessed a lot of local history.

They are like trees planted by streams of water, which yield their fruit in its season, and their leaves do not wither. In all that they do, they prosper. ~ Psalm 1:3

Yesterday we lost a giant in our forest. One of the residents, a great and towering beech tree unexpectedly toppled in the modest spring blow where gusts reached 30 miles per hour.

We have learned since moving to Holland at the end of 2016 that great trees die. Sometimes they are murdered by developers who need them removed to dig a new foundation. Sometimes homeowners take them down before they fall of disease and cause unwanted damage. Insurers call this protecting against liability. We have seen trees chopped because homeowners want more sunshine or weary of raking leaves. Yesterday’s fallen giant died of natural causes. Death happens.

This fallen colossal historian knew life here before this patch of earth was inhabited by the Native American Chief of the Ottawa Indians, Chief Waukazoo who left this magnificent forest his name.

Waukazoo Woods is a desirable settlement for 1,313 people today who still dwell beneath the forest canopy of historic giant trees tucked between the Ottawa County Fairgrounds and the north shore of Lake Macatawa. Marigold Woods, where Nancy and I live, is a newer subdivision developed in the 1980’s, in the heart of this greater forest of Waukazoo.

I am grateful to these native people whose legacy also includes cherished words in our local vocabulary, such as Ottawa which means, “trader people,” Macatawa (black), Michigan (big lake), Muskegon (marshy river), Petoskey (rays of the living sun), and Mackinac (big turtle).

Chief Waukazoo departed from the neighborhood in 1849 to settle full time in Waukazooville (now named Northport) in northern Michigan after returning to these local woods with his people from the tribe’s annual summertime northern Michigan migration. They discovered that a new species of human, the immigrant “Dutch,” had moved into the neighborhood of the tribe’s winter encampment during the summer months when the tribe was gone and rooted on tribal land without any respect for the signs that this forest of giant beech, oak, and hemlocks was already spoken for. The Dutch comfortably assumed control of the conveniently empty longhouses during the summer, and then explained the concept to Chief Waukazoo and the tribe that, “possession is nine tenths of the law.” This legal precedent tips ownership disputes in the favor of the current possessor. The concept is especially forceful when the law is written in your language, the new presiding judge doesn’t speak Ottawa, and the new occupants have firearms to secure their claims.

In 2015, the year before Nancy and I purchased a retirement stake in this forest, descendants of Chief Waukazoo returned to the neighborhood, 150 years after the Chief’s departure with his people, to help Park Township celebrate the 100th anniversary of our local Township government. A historical marker was planted at the entrance to this forest to further give honor to the Chief and his tribe who were inhabitants here first. Thanks to the legacy of the Ottawa and the good sense of their Dutch successors, our trees survived the lumbering craze when other Michigan forests were denuded to help rebuild Chicago following the great Chicago fire in 1871. Mr. Gold, a rich Chicago Industrialist, preserved the section of Waukazoo Woods where we now live.

The departed arboreal giant was older than all this human history. It stood as a silent sentinel along Waukazoo drive where it pre-dated construction of all of the multi-million dollar lakeshore estates that sprang up just across the drive. The fallen tree was acquainted with the lineage of the soaring eagles that nested nearby and the ancestry of the local squirrels, and deer, and woodpeckers of the forest. It lived through the U.S. Civil War, subsequent World Wars and many of our U.S. Presidents. It witnessed the great depression and annual migrations of Canada geese, quietly doing its job: providing shade, poxygen, twigs and branches sloughed for fertilizer and fires. It scattered nuts and seeded offspring.

On April 11, 2019, around 11:30 am, this giant beech snapped at the base, wrenched from its roots, and violently slammed to the earth. The nameless fallen giant blocked Waukazoo drive and knocked out the electrical power for many of the residents of the woods.

Nancy and I had gone out to run some errands in town. We learned about the tree fall when we got home to discover that our garage door opener was dysfunctional and we couldn’t get in. We drove around the neighborhood and learned that none of our neighbors had power either. We flexed and decided to go for lunch at Hog Wild Barbecue. Hog Wild had power. Without the tree’s unexpected demise, we would not have made a new Hog Wild friend, Tim. Instead of mouth-watering brisket, I would have had ordinary peanut butter and jelly yesterday at home.

When we returned home after lunch, the power had been restored and we went on with life.

We drove down Waukazoo drive to survey the damage in the early evening and talked to the current resident where the tree fell. The giant beech had already been sliced for stacking to get it out of the road. A giant oak that fell last year in this same yard has given that homeowner more firewood than he can use for a few years. This beech will be hauled away by a tree removal service. The stump will be ground up, and life will go on.

I will go on too, but I thought it important today to remember this great life.

Trees are a treasure.

Forests are an inherited gift that enhance life.

Every day, I am grateful for the sense of spiritual peace that I feel when walking under the great cathedral canopy of these ancient branches.

This week I will plant a new tree. I invite you to plant one too if you can find the time and space to give a gift to tomorrow’s grandchildren.

This is called, “paying it forward.”