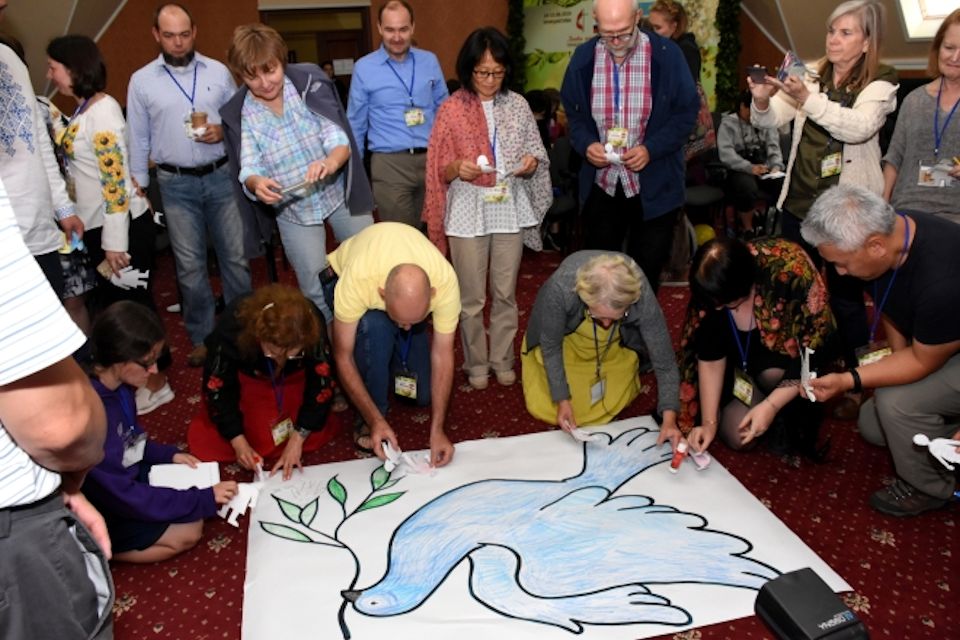 A reminder, from the Rev. Paul Perez and Bishop Edward Khegay, that “Christ can connect people across the deepest divisions imaginable.” Here are ways you can be a peacemaker today.

I spent two weeks with a team of Wesley Theological Seminary students in Russia around Easter in 2005 as part of a cultural immersion experience. United Methodists hosted us in the cities of Moscow and Samara.

It was a powerful experience. Having grown up during the final years of the Cold War, it was deeply moving to live, worship, and learn alongside people who had been the “enemy” and had been the “villains” of my childhood.

When news broke of Russia’s invasion of Ukraine, I thought of my time in Russia and the people I met. I had a hard time thinking of them as “villains” once again.

Russian and Ukrainian United Methodists share a Bishop, Eduard Khegay. A recent article from Ask The UMC describes United Methodism in Ukraine as “small (351 persons total across six congregations based on 2017 data). The congregations are strategically located in or near larger cities, including Kharkiv, Kyiv, Poltava, and Chernivtsi, and the two breakaway areas recognized by Russia in Donetsk and Luhansk.” Bishop Khegay posted this prayer, in Russian, on the Eurasia Episcopal Area website, which has circulated throughout United Methodist social media over the past week:

Lord, we need a new heaven and a new earth.
We remember the world that You gave us,
and mourn that we have lost it.

We all want to be safe.
But our security is not in force.
Spare us the ravages of war.
Teach us the ways of peace.

Bishop Keghay offers a simple and yet powerful prophetic witness to the horrors of war, the demand for peace, and a reminder of how Christ can connect people across the deepest divisions imaginable. In a culture all too ready to cast “heroes” and “villains” and glorify violence,  may we always remember the people caught in the middle of the folly of world powers.

At the time of writing, the United Nations is reporting that two million people have fled Ukraine over the past two weeks in what is considered the largest humanitarian crisis in Europe since the Second World War. United Methodists in Ukraine and surrounding countries are responding to this crisis.

Many people have reached out to the Conference office and staff asking how they can help Ukrainian refugees or host a refugee family. It is difficult for those a world away to watch the images and cell phone videos coming out of Ukraine and not want to help.

No refugees from Ukraine are currently being resettled in the U.S.A. If this happens, it could be as long as two years away, as the usual vetting process for refugees takes at least 18-24 months.

The best thing you can do now is give to UMCOR’s International Disaster Response and Recovery Fund to support partners in Europe assisting people on the ground.

You might also contact the UMC’s refugee resettlement partner Church World Service or another refugee resettlement agency in your area and express your interest in hosting a refugee family. There may be a family from another area of the world that needs your support now.

My fellow students and I celebrated Easter on a train by cramming into a sleeper car and singing hymns as we crossed the Russian interior between Moscow and Samara. This Lent, I am praying for people fleeing their homeland by rail and foot. May we all pray and act for peace during this holy season.