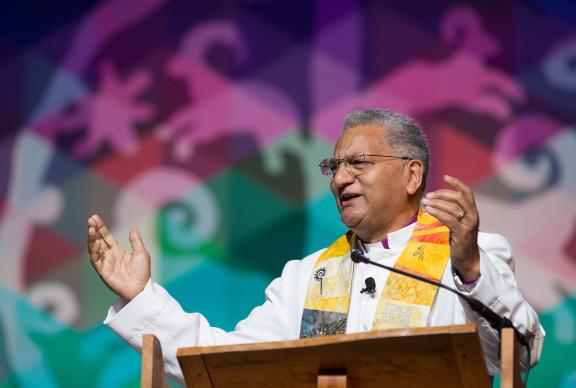 Bishop Ivan Abrahams believes “the golden years of Methodism don’t lie behind us, but in the future.”

Bishop Ivan Abrahams has since 2012 been top executive of the World Methodist Council, whose members include The United Methodist Church and scores of other groups with a Wesleyan theology and tradition. Abrahams is just the fourth person to lead the council, and the first South African. He previously was presiding bishop of the Methodist Church of Southern Africa.

Abrahams will be in the spotlight during the World Methodist Conference, set for Aug. 31-Sept. 3 in Houston. That once-every-five-years meeting draws Methodists from all over the world. He recently spoke by phone with Sam Hodges of United Methodist New Service.

The council is really the only body that convenes the broader Methodist family, and it is the amalgam that holds the global Methodist family together. One of the purposes of the council is to network, and the World Methodist Conference is a place where people will be sharing stories of what God is doing in the Wesleyan Methodist family. It’s a place to incubate audacious dreams, to cast a vision, and to set strategic objectives for cooperation, as well as a place to be inspired by great Methodist teachers and speakers.

What has been your emphasis as general secretary or top executive of the council?

One of my mantras since taking office is that, in this day and age, it cannot be business as usual. We’ve seen a changing ecclesiastical landscape. We’re living in a post-modern era, and we need to change with the times.

One of the things that I have been a bit disappointed about in the United States is the sense of pessimism, which is definitely not shared with the rest of the world communion. We stand in a great tradition. I passionately believe that the golden years of Methodism don’t lie behind us, but in the future. I am confident that those of us gathered in Houston will be able to write the next chapter in our Methodist history as we tackle the challenges of the 21st century. And, in that sense, I’m an eternal optimist and a prisoner of hope.

What’s the state of Methodism in Africa, and how best should Methodists approach ministry in the African context? Should the push be on evangelism or social action, including public health?

I think we have a lot to learn from the African context, because Methodism (there) is dynamic and growing. I see the spirit of the Methodist movement and Mr. Wesley wherever I go on the African continent.

From my experience, (evangelism and social holiness) are two sides of the same coin. Especially with indigenous spirituality, there is no dichotomy between the sacred and the secular. That is something folks in the West need to learn. God is God of all creation. Methodism speaks into that reality of personal salvation, tied up with works of mercy.

How many World Methodist Conferences have you attended, and what’s your vision for the Houston meeting?

I’ve attended since Rio (de Janeiro) in 1996. My vision is that the Houston conference will be one of the most inclusive in the 135-history of the council. We have people from 134 nations and 80 different denominations in the Methodist family. The last time we counted, only five of those denominations will not be represented at the conference.

It is really a jamboree, a place where we celebrate our heritage, a place to be inspired. We are not dealing with any legislation, and we are not caught up with the business of a conference. The governance session for the World Methodist Council is done at the council meeting before the conference.

The general conference theme in Houston is “One,” with the subtitle “one God, one faith, one people, one mission.” And in a real sense, this conference has come of age, because this is the 21st World Methodist Conference. So this is a time to celebrate, and we’re going to throw a party in Houston, which is one of the U.S. cities that really is a microcosm of the world, a place where over 100 languages are spoken.

Do you think The UMC’s tensions over sexuality will have an influence on the Houston gathering?

No, it is not a concern for me. Some of our member churches have passed legislation in this regard, and we respect the process that takes place in our member churches. I often draw a comparison with the United Nations. The conference is an ecclesiastical U.N., where there is a place for all at the table, even the smallest Methodist entity.

How much longer will you be general secretary, and what are your priorities for that time?

There was an evaluation process last year, and the steering committee has asked me to make myself available for another five-year term. That will be put before the conference. It’s really for the conference to decide. Some of the themes that we are looking at, at the (Houston) conference, are migration, climate change, interfaith relations, health and well-being, human trafficking, poverty and inequality, and war and peace. I’m hoping that we will be able to identify three of those seven themes and those three will be the themes that we’ll be working on for the next five years.