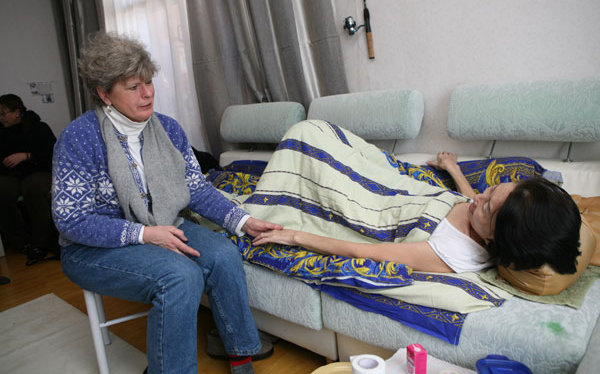 Helen Sheperd was a Global Ministries missionary nurse from 1992 to 2015, specializing in hospice ministries, first in Korea, and from 2002 through her retirement in Ulaanbaatar, Mongolia, where she also founded the Mongolia Mission Initiative. A native of Ann Arbor, Michigan, Helen earned her diploma in nursing from Bronson Methodist Hospital School of Nursing in Kalamazoo. ~gbgm

The Michigan Conference has a strong history of missionary support. They salute these servants of Christ.

Giving to missionary support through The Advance depends in some measure on direct, personal ties between missionaries and congregations. Facilitating even occasional missionary visits to supporting local churches, which are mostly in the United States, becomes difficult with more personnel coming from, say, Africa, notably when it can be hard to obtain entry visas for such visits. Unless a Global Mission Fellow comes into the program with upfront financial support from family or home church, two-years is a short time to build up a network of donors.

The financial challenges are real but not insurmountable. Our mission organizations have faced such challenges over the past 200 years, and they have always contributed abundantly to the spread of the gospel of Jesus Christ and service to others in Christ’s name.

A diverse missionary community from everywhere to everywhere raises new issues regarding mission contexts and relationships, matters born out in recruitment, training, assignment, and duration of service. It involves interaction with a range of partners, United Methodist and ecumenical, and may include association with national and international organizations, philanthropies, and even corporations.

Decades of experience has taught that effective mission must consider the principle and the practice of differentiation. The mission approach and personnel must be right for the situation and culture. Missionaries are not interchangeable pieces of a system; they are valued and valuable souls able to fit specific contexts and develop deep relationships within those places. The contexts differ widely, and one approach is not suitable in all cases. The importance of differentiation is clear in Global Ministries’ experience with new mission initiatives beginning in the last decade of the 20th century.

Several of those initiatives were in areas of Asia where Methodism had never before existed, including areas of Southeast and Central Asia and Mongolia, where changes in political systems opened doors to missionaries. These places turned out to be quite different from one another, each requiring distinct missionary skills. In Southeast Asia, the earliest missionaries were refugees from those lands who had become United Methodists in the United States, but particular skill sets were required even within proximate areas of Southeast Asia. In one region, Wesleyan theology strongly appealed to well-educated, upwardly mobile young adults, while in another, poor villagers became the operative United Methodist Church. In the latter, missionaries needed to be able to train church members to access or even create jobs, while a more pressing challenge in the other was to provide contexts for social interaction.

Want to meet a missionary when he or she comes to Michigan? Contact your Global Mission Secretary: Jackie Euper (DC) or Sharon Burkart (WMC).

In Mongolia, our mission began with a hospice for the poor of Ulaanbaatar, founded by a missionary nurse who also taught Bible stories to children and cultivated young musicians. In Central Asia, the key was providing educational opportunities for those on the edges of established systems, and in one case, the act of repairing a road.

Missionaries truly are summoned by God for service in the missio Dei, God’s mission, but the sense of service is almost always linked to distinct professional capacities and talents. We often must seek out specific abilities—gifts that give substance and form to the call to serve, as in St. Paul’s recognition in I Corinthians 12:28 of apostles, prophets, teachers, miracle workers, healers, helpers, guides—in many different languages. We look for specific skill sets—in evangelism and church development, health and nutrition, agriculture, technology, communications, and so forth.

There are certain realities and capacities that I expect are common to all missionaries’ experience, growing out of a sense of call. One of these is a sense of “going.” “Here am I, send me,” the prophet Isaiah responded to God in a vision. “Going” may be from one country or culture or language to another, or, in the case of domestic service, going from one location to another or from one ethnic or economic environment to another. The selection process is often done in collaboration with a local or regional mission partner that may ask for a missionary with certain skills and competences. Missionaries are often sent in response to invitations from churches or communities in need of workers. This practice goes back a long way in Methodism. The first Methodist missionaries to North America were sent by Methodists in England in 1769 in response to a “pressing appeal” for help from a Methodist group in New York.

“Who is willing to go?” John Wesley asked at the Methodist Conference that year. Two young lay preachers stepped forward.

Another shared quality is the ability to forge strong, respectful relationships with people whose background, culture, language, diet, style of worship, and expectations differ from that of the missionary.

Mission relations with an existing church in a country like Liberia (where Methodism arrived in the 1830s) are by nature different from those involved in starting an entirely new mission initiative in Mongolia, where United Methodist work is quite new. Yet the same principles of multicultural respect and collaboration apply in both cases. In new locales, “pioneer” missionaries must start out with an openness to and appreciation for local culture; they must seek out local partners interested in the objectives and services proposed. Most importantly, original intent must include local leadership development, with the long vision of an indigenous church or worshiping fellowship moving toward homegrown leadership.

The biblical imperative affirms that “mission is not created by the church; rather it is given to the church by God’s saving action in and on behalf of the world.” (Grace Upon Grace: The Mission Statement of The United Methodist Church. Graded Press, 1990, p. 5.)

Arriving at the affirmation of mission from everywhere to everywhere required a shift from the colonial model of the late 19th and early 20th centuries, without abandoning the biblical mandate of taking the message of God’s love into the whole world.