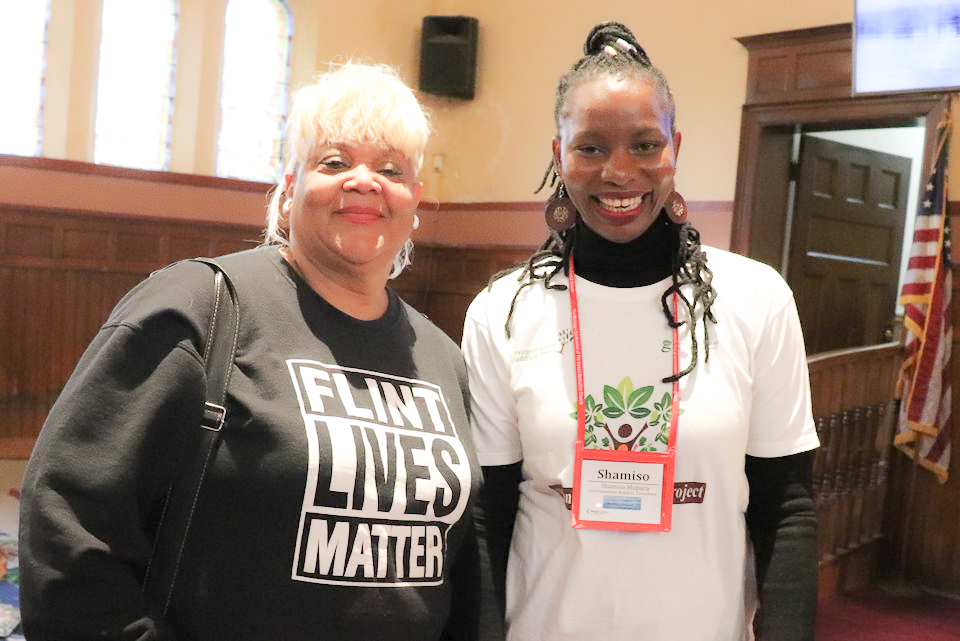 Two advocates for clean, safe water, one from Flint and the other from Zimbabwe, were among those gathered in Detroit for a Water Justice Summit on January 24-25. ~ photo courtesy Valerie Blakely

On January 24-25, people gathered in Detroit from around the world to raise awareness and lift a voice for safe, clean drinking water.

The event was all about partnership and a less familiar concept, bidirectional learning. And this photo of two women and their tee-shirts says it all. The two of them connected at the Global Water Justice Summit held at Cass Community United Methodist Church, January 24-25.

One of them has struggled through the water crisis in Flint, Michigan. Flint Lives Matter! The other is a founder of Environmental Buddies, a reforestation program in Zimbabwe. Building Community through Trees!

They were two of 120 participants who connected with each other at the two-day event in order to talk about issues of clean, safe water in places thousands of miles apart. The Water Summit bridged those miles through worship, panel discussions, and small group strategizing.

Two clergy on Cass Community UMC’s staff organized the event. The Revs Jon Reynolds and Alex Plum talk about the significance of the gathering.

Reynolds noted, “It was a beautifully diverse crowd of folks who represented both local and international aspects of water justice. There were Detroiters and Flint residents and people from across the North Central Jurisdiction, who have partnered in the past with water justice initiatives globally.”

The event organizer stressed the importance of having the summit in Detroit. “We hosted the event in a place where 100,000 people had their water shut off. It was striking for our international guests to hear there are those struggling for access to water here in the U.S.”

Plum celebrated the reciprocity that he witnessed. Bidirectional learning is important to Alex and he said: “there were some big lessons” that emerged from the summit. “Folks from Detroit reflected on how they feel like Detroit is a ‘third world city’ considering the water issue is so pronounced all over the world. The sharing really brought the global impact of the work back home to folks and re-energized them.”

Plum admitted that there were some feelings of discouragement present. “At one point when folks were feeling down about the likelihood of addressing the major burden of lead line replacement, someone channeled the speaker from Zimbabwe, Shamiso Mupara, saying, “We have to have a Shamiso moment! We need to be bold! We have to demand that lead lines be replaced!”

“They built an incredibly strong case for the importance of water justice, particularly as it pertains to racial prejudice and global economic practices,” Reynolds said. “All brought their own passions and experiences to the discussion along with history, data, and information. “They named injustices common to all their work [U.S. and Africa] and called for unifying efforts to end those injustices,” Reynolds added.

Two more panels made presentations on Saturday morning. A Global Water Panel featured participants from Liberia, Kenya, Zimbabwe, DR Congo, and Guatemala. The Local Water Panel that followed included persons from four states, speaking about water concerns in Detroit, Flint, Toledo, Chicago, and Newark. Reynolds pointed out that Michigan’s Native Americans had representation in the event through Mother Jannan Cornstalk, a citizen of the Little Traverse Band of the Odawa Nation. Mother Cornstalk was the recipient of the Michigan Environmentalist of the Year in 2018.

“I never thought of water as one of our relatives until Mother Cornstalk said that in the panel on Saturday,” Reynolds said. “She and other Native Americans recognize water as a persona.” Another example of bidirectional learning across cultures.

Saturday afternoon was an opportunity for break-out sessions.

Monica Lewis Patrick, We the People of Detroit, gathered participants together around Local Activism and Resistance. Alex Plum said, “We had great local breakout session with about 40 local water activists from across Detroit, Flint, northern Michigan, Chicago, Toledo, Newark, and the Twin Cities.” He reports that they created, “about eight buckets of work on topics like affordability and the collection and dissemination of policy/issue briefs and evidence around their shared impact and work related to water.”

Rev. Reynolds convened a break-out on the global human rights mission. The main take-away was an unofficial challenge from global participants to every United Methodist to give one dollar to a water-related cause during the next four years. “Our friends from Africa ask that people in the U.S. stop taking water for granted.” Regarding this $1 Campaign for Water, Reynolds suggested Advance Special projects like WASH. That UMCOR program “gives a jump-start to other projects,” according to Reynolds. Water for Life is another possibility for Michigan United Methodists interested in the Michigan-Liberia Covenant Partnership.

The stated purpose of the Global Water Justice Summit was: a tangible strategic output: a road map for mission partnerships and investment within the North Central Jurisdiction and with our siblings in Africa. Those action steps were initiated in the third break-out session led by the Rev. Paul Perez. Perez serves as Associate Director for Mission and Ministry of The Michigan Conference. He also sits on the Mission Council of the North Central Jurisdiction, which helped fund the Water Summit.

Perez reported, “The NCJ legislation break out section made plans to submit a water justice resolution to the North Central Jurisdictional Conference meeting July 15-18, 2020 in Ft. Wayne, Indiana.” The resolution will build on the presentations and discussions at the summit to “articulate the theological foundations of safe, accessible, and affordable water for all.” The resolution calls the jurisdiction, conferences, congregations, and individual United Methodists to action.

The Jurisdictional Conference that will act on this resolution meets two months after the 2020 General Conference of The United Methodist Church. Reynolds maintains a positive attitude. “Nothing that General Conference can do affects what it says in Matthew 25,” Reynolds observed. “We are still tasked to give thirsty people something to drink. It doesn’t matter if African conferences end up in a different denomination. That doesn’t take away decades of partnership. Relationships are more important than righteousness.”

That sense of covenant and community shone through in closing worship. “We stood in a circle looking at each other,” Reynolds said. “A perfect embodiment of what heaven will look like!” Those who gathered out of a common struggle for justice, hope, and inspiration, reaffirmed their baptism. “We used the same water blessed earlier by Mother Cornstalk,” Reynolds explained, “and committed ourselves to be about the work of providing clean, safe drinking water for everybody.”

Plum added, “It was empowering to see these connections and examples inspiring folks to make big changes and adopt new mental models to frame their individual work and place it in a global context. We are in this work together – everyone, all around the world!”

“It was cool to watch college professors, politicians, church leaders, local community activists, and others all come together with one voice merging out of their experiences, based on a common need for water to survive. They helped us come out locked arm-in-arm,” Reynolds concluded.