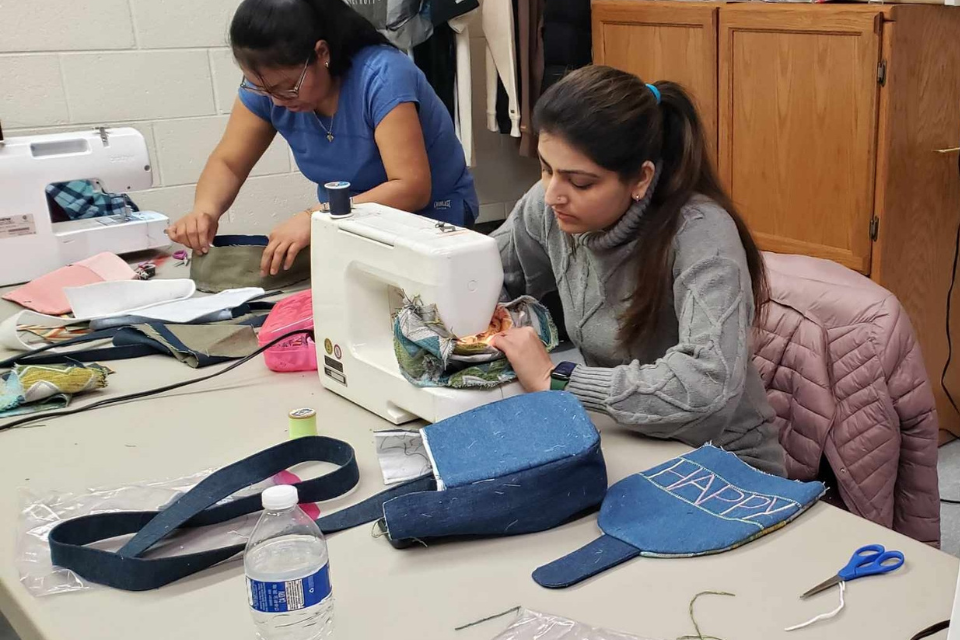 Last year, First United Methodist Church of Warren started a new ministry for immigrants and refugees in their neighborhood. Anyone interested in learning how to sew is welcome. ~ photo courtesy Rev. Melissa Claxton

Warren: First UMC has started an International Friendship Center that teaches immigrants, refugees, and anyone from the community wishing to learn how to sew.

This is the third story in a series highlighting the recipients of a 2021 Mustard Seed Migration Grant and the new ministries that were started. Congregations are encouraged to read these stories and find ways they can do similar justice advocacy work in their neighborhoods and communities. The deadline for this year is September 30, 2022, for those congregations interested in applying. For more information, refer to this earlier news story, this story about Dearborn First, and this story about French UMC.

Raised in small-town Parma, west of Jackson, Rev. Melissa Claxton came to serve First United Methodist Church of Warren in 2018. This was her second appointment following her ministry at North Parma UMC, and she arrived with an open heart and mind as she began to take root in her new suburban community and get to know her neighbors.

“Being from rural America, what I love about Warren is the diversity in our community. I love building relationships with folks from other places,” Pastor Melissa says. The city of Warren is part of sprawling suburbia north of Detroit, which has been an area that has seen a recent increase in immigrants and refugees settling in the United States.

As she was getting comfortable with her new position and learning about the community, Pastor Melissa and the congregation dreamed up an idea for a sewing ministry to engage their community and assist their neighbors. Pastor Melissa loves to sew, as do other members of Warren: First, so the seed was viable.

Last fall, with the financial assistance of a Mustard Seed Migration Grant, Warren: First UMC started an International Friendship Center (IFC) focused primarily on sewing as a safe space for people of all walks of life to learn and grow together and build new friendships.

The idea for a sewing ministry to immigrants and refugees had been watered before the pandemic put everything on hold. Not long after the idea was planted in 2019, Pastor Melissa received a call from Cynthia Khan, Director of Community Engagement for Hope Care and Beyond.

Pastor Melissa felt it was providential: “Yeah, right after I said something about starting a sewing ministry then [Cynthia] contacted me, and I took that as a God sign.”

Cynthia had been calling various churches and community spaces to find a potential spot for an International Friendship Center (IFC) in Warren. Hope Care and Beyond has eight centers throughout the Detroit area, and the organization was trying to establish one in this area.

Hope Care and Beyond, as a local nonprofit organization, assists immigrants and refugees living in the metro Detroit area with a variety of social service needs, including English language skills, basic needs assistance, and learning new skills for employment. They are also establishing IFCs for community building and ongoing support of immigrants and refugees.

Each IFC has its own specialized offerings, and at Warren: First their focus is teaching people how to sew and connecting them with opportunities to use that skill to earn an income if they want that. There is also an English as a Second Language (ESL) class that meets the hour before the sewing class.

Warren: First’s International Friendship Center (IFC) has a sewing class every Thursday. It’s a busy enterprise with three basement rooms equipped with sewing machines, notions and tools, and shelves stocked with fabric. All the fabric is donated from a wide variety of sources.

The sewing class has a come-as-you-are philosophy. Pastor Melissa teaches frequently and notes that one of the challenges is managing the different levels of experience and finding projects that complement the comfort level and interest of each student. That’s why the first project every student is given is a simple tote bag, something they can complete without getting discouraged and take home right away. From there, each person’s needs direct next steps and projects.

The church started promoting the class by placing flyers in local schools and community centers, and quickly word started to spread. Some weeks they have 10 or 12, other times just a couple. But if everyone who comes there on a regular basis would show up, they’d have 25 or 30 people.

All ages come to sew—teenagers, young couples with children, college students, older women who do not work, retired men. The students are from all over the world. Pastor Melissa notes, “We have seen God’s blessing in the diversity of folks who come into our building each week. We have women from the Middle East, Ukraine, Central America, and here in the United States.” And they have different religious affiliations, including Muslim, Chaldean Christian, and Hindu.

One of the women Pastor Melissa has gotten to know well is named Razia. Razia wants to learn how to sew, but it’s challenging to regularly participate as the mother of three small children. To make it as welcoming as possible, the church has set up a play area for the children since childcare isn’t available. Other parents are enjoying this flexibility and appreciate the care the church gives them.

“[Razia] loves the classes,” Pastor Melissa says. “She is Muslim. One of the things she said is that she feels that that’s just really a safe space. She and I connected really well.”

The sewing class mostly draws women, but there are men who participate. A husband of one young couple comes with his wife and learns how to sew between remote work meetings. He loves it so much that he has been going home and teaching his mother how to make a beginner tote bag.

Another male student named Kevin, a retired engineer from General Motors, joined the class after going online and googling sewing classes. He lives there in the neighborhood. His grandmother used to sew, and he had always wanted to learn.

As only an engineer can, Kevin quickly developed the skills necessary to do amazing work. In just a few short weeks, he was designing purses for his wife and daughter and is now helping others learn to sew. He also comes twice a month to the church for Sewing for Missions, where people come and work on a specific mission-focused project together. “Anytime I have sewing, Kevin shows up,” says Pastor Melissa. One time they made baby blankets for needy mothers-to-be, another time it was wool mittens made from old sweaters that were given to warming centers.

So, Warren: First’s sewing class is not just for immigrants and refugees, it is open to anyone in the community who wants to learn. Together, the students are building relationships, in a safe space, and making friends as they get to know one another better. Plus, they are working together for a good cause.

Planting for the Future

According to Cynthia Khan, IFCs like the one at Warren: First can be successful because of the important foundational work done to create a culturally relevant environment. Some immigrants and refugees are reluctant to go to a Christian church for a class like this because of the racism and bias that they’ve experienced from religious people. Churches, on the other hand, are also fearful of the changing demographics of a neighborhood and what that might mean for them and their future. So, trained leaders like Cynthia can teach aspects of cultural and religious diversity to volunteers to prepare them to participate in such a ministry.

Another reason IFCs have the potential to grow and be sustainable is that these sewing skills are marketable for those who may be looking to find employment. There are factories and businesses hiring sewers and embroiderers. And some items, like purses, that are being made at these IFCs are being sold online and elsewhere with profit returning to the ones creating them.

Both Pastor Melissa and Cynthia see the potential for growth, but there are challenges. It’s difficult to have consistency as these classes are populated only by those who are interested at any given time. Some are only around for a season. Life and work situations change, people move on. But the opportunities for connection and community are still valuable.

Other challenges include the need for more teachers or helpers to assist with sewing and to teach the ESL class that meets prior to the sewing class each week. No degree or certification is necessary for either. There’s also a great need for reliable transportation for students. Many do not have vehicles and rely on volunteers or others to get to and from classes. Consistent, affordable transportation would increase the possibility of having more students.

Word continues to spread about Warren: First’s IFC and its sewing and ESL classes. Hope Care and Beyond is doing their part by partnering with other community organizations and businesses. Returning students who enjoy the experience are bringing friends and family members to see what’s so wonderful about these classes.

Pastor Melissa invites churches considering a ministry among immigrants and refugees to “dream big, don’t be afraid of failure, and trust God to do new things and open new doors.” The women, men, and children she is befriending while teaching sewing classes at the Warren: First IFC are making an impact on her life and ministry. They are all children of God and are seeking safe, new opportunities to learn and grow as they continue to find their way settling into a strange land.

“These are wonderful, courageous people,” Pastor Melissa concludes. “I might be there to teach them how to sew, but God placed them in my life to teach me the beauty in all creation.”