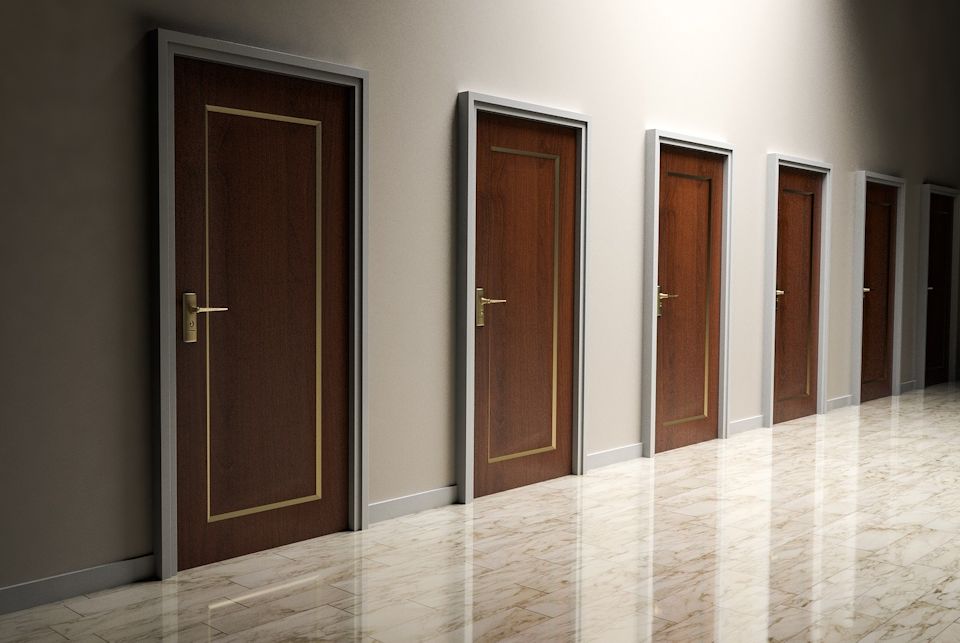 Image by Arek Socha from Pixabay

Facing a proposed denominational separation, many United Methodists expect big decisions ahead about where they will make their church home.

The proposed split comes after decades of intensifying debate over LGBTQ inclusion. Now the question before many: Do they want to stay with The United Methodist Church or seek out an alternative?

This fall, a number of groups have planned online or in-person events aimed at helping churchgoers discuss and discern which direction they and their congregations might choose. The groups include those who hope to stay United Methodist and those hoping to set up a new, more theologically conservative denomination.

These conversations come at a time when much remains uncertain about when or how such a separation might take place.

The COVID-19 pandemic already has twice delayed General Conference — the denomination’s top lawmaking assembly that has a final vote on any formal separation plan. Questions remain about whether the big meeting, which draws voting delegates from four continents and multiple time zones, can go forward as scheduled on Aug. 29-Sept. 6, 2022, in Minneapolis. Much depends on vaccines and visas.

In the meantime, the delays and uncertainty have left many feeling frustrated.

“Folks want the decision to be made yesterday,” said New York Conference Bishop Thomas J. Bickerton, who serves as a nonvoting bishops’ representative on the commission that plans General Conference.

“Delegates are eager to live out their elections, and we’re anxious about separation,” he said. “You know, it’s very understandable. But we’ve just got to hold on a little while longer until we can make those decisions with all the information that’s before us.”

Among those trying to provide information is the Connectional Table, an international leadership body that coordinates denominational ministries.

Starting at 10 a.m. U.S. Central time Oct. 5, the leadership body will host “Tuesdays at the Table: Should I Stay? Or Should I Go?” The weekly online conversations with United Methodist theologians and leaders aim to help churchgoers better understand their faith, their church and themselves.

Earlier this year, the Connectional Table committed to host conversations about the future United Methodist Church. Tuesdays at the Table are part of that effort.

“Tuesdays at the Table is about identity,” said the Rev. Kennetha Bigham-Tsai, chief connectional ministries officer. “We have to understand who we are before we can begin to articulate who we want to be — vision.”

She said that means figuring out: “What is it about our core identity that we want to conserve? What do we want to build upon as we move into a new future?”

The 20- to 30-minute conversations will deal with such topics as the Wesleyan understanding of grace, the Bible’s role in United Methodists’ lives and the church’s connection around the globe. The discussions are scheduled each week through Dec. 21— first on Facebook and then available for later viewing at UMC.org/ComeToTheTable and the UMC YouTube channel.

David N. Field, a United Methodist theologian based in Switzerland and an ecumenical staff officer for the Council of Bishops, will be the first guest. Field, a veteran of denominational debates, will discuss why he is United Methodist and how he is thinking through the decisions ahead. 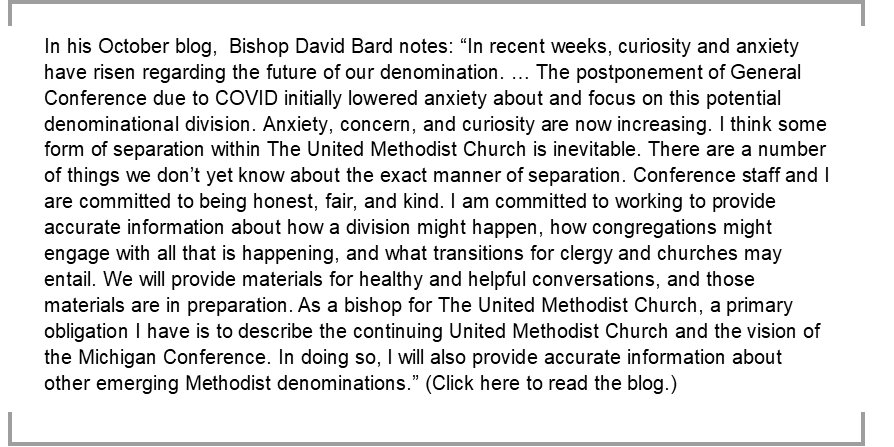 “This time of waiting and uncertainty is a calling to a more difficult but ultimately more rewarding task of building relationships across divides,” he told United Methodist News. “Whatever a local church decides to do and individual members decide, it is important that we live as siblings united by our common faith and sharing a love for God, each other and our neighbors. So my encouragement is to go out and nurture relationships across the spectrum of opinions — relationships that will endure beyond a split when it comes.”

One thing on which many agree is that they want the denominational rancor to end.

After decades of debate over homosexuality, matters came to a head with the special 2019 General Conference. The tumultuous assembly passed, by a 438-384 vote, the Traditional Plan that reinforces bans on same-sex weddings and the ordination of “self-avowed practicing” gay clergy. However, the legislation faced immediate resistance that has only continued, and U.S. church members elected to the coming General Conference more delegates who are opposed to the Traditional Plan.

The lawmaking assembly faces multiple proposals to split along theological lines. The most endorsed of these is the Protocol of Reconciliation and Grace Through Separation. If adopted, the protocol would allow traditionalist churches and annual conferences (those that support restrictions on gay marriage and ordination) to leave with church property and $25 million to form a new denomination. The proposal also sets aside $2 million for other groups of churches that might leave.

The Wesleyan Covenant Association is overseeing the formation of that new traditionalist denomination, the Global Methodist Church, which plans to break away from The United Methodist Church. WCA leaders have been holding regional events around the globe to let people know about the plans for the new denomination and generate interest.

One question the WCA frequently faces is why the group is organizing a new departure when the Traditional Plan, and similar prohibitions, have repeatedly prevailed at General Conference.

The Rev. Walter Fenton, the group’s vice president for strategic engagement, addressed that issue at a recent gathering hosted by the Tennessee WCA chapter in Franklin, a Nashville suburb.

The bottom line, he said, is that the traditionalists have the votes but not the means to enforce them.

“The conflict has become irreconcilable,” he said. “So you may have passed things at the General Conference, but when you have people who continue to defy what was passed and then you have other people who are designated to hold them responsible for their defiance, and they don’t do that, you essentially have a constitutional crisis.”

The gathering drew about 160 people — about a quarter of which came from out of state to attend the New Room Conference, a separate event that started the following day. The tone of the WCA gathering was mostly one of hope and encouragement to churchgoers who expect to join the Global Methodist Church.

The Rev. Angela Pleasants, the group’s vice president of clergy and church relations, urged those gathered to use this in-between time to talk to their neighbors, worship passionately and stay focused on mission.

“The kingdom of God has not stopped just because we Methodists are battling back and forth,” she said. “There are still souls that need to be won for the kingdom. So we continue to do that now.”

The Alabama-West Florida Reconciling Ministries Network, a group that wants to stay in The United Methodist Church, has put together a webinar series also aimed at providing hope as well as information.

Titled “The UMC: Yesterday, Today and Tomorrow,” the webinars take place on Zoom from 6:30 to 7:30 p.m. U.S. Central time each Thursday in October. So far, more than 100 people have registered.

Pat Luna, one of the organizers of the series, said the hope is to encourage positive dialogue about the denomination that has shaped lives around the globe.

“I’ve seen the impact it has in places like my own church, where we offer the only free medical clinic in our area,” Luna said. “I have seen the impact on top of roofs of home that I’ve been tarping after a storm.”

She added that the denomination has sound theology that embraces the Lordship of Jesus Christ and the teachings in the Apostles’ Creed.

Among those who signed up is Diana Cason, a member of First United Methodist Church in Hurst, Texas.

Some churches aren’t waiting to see what happens but are already heading for the exits. The 2019 special General Conference approved new provisions to make such disaffiliations possible. But to leave with property, church law currently requires congregations to make large payouts to cover pension liabilities and other obligations.

Pleasants told the Tennessee gathering that the Wesleyan Covenant Association at this point is encouraging congregations to wait to leave until the protocol is passed because of the “insurmountable fees” they would have to pay otherwise.

Bickerton, the New York Conference bishop, makes it a point to visit every church considering disaffiliation in his conference and listen to them.

“My approach has been to say very directly to them that I have not come to try to coerce them,” said Bickerton, who served on the team that negotiated the protocol.  “I’ve not come to convince them of anything. I’ve come to give them accurate information.”

Ultimately, he is clear that his hope is congregations choose to stay.

“Part of my role and function as a bishop is to guard the unity of the church,” he said. “And that leads me to say — very genuinely — I don’t want you to leave.”