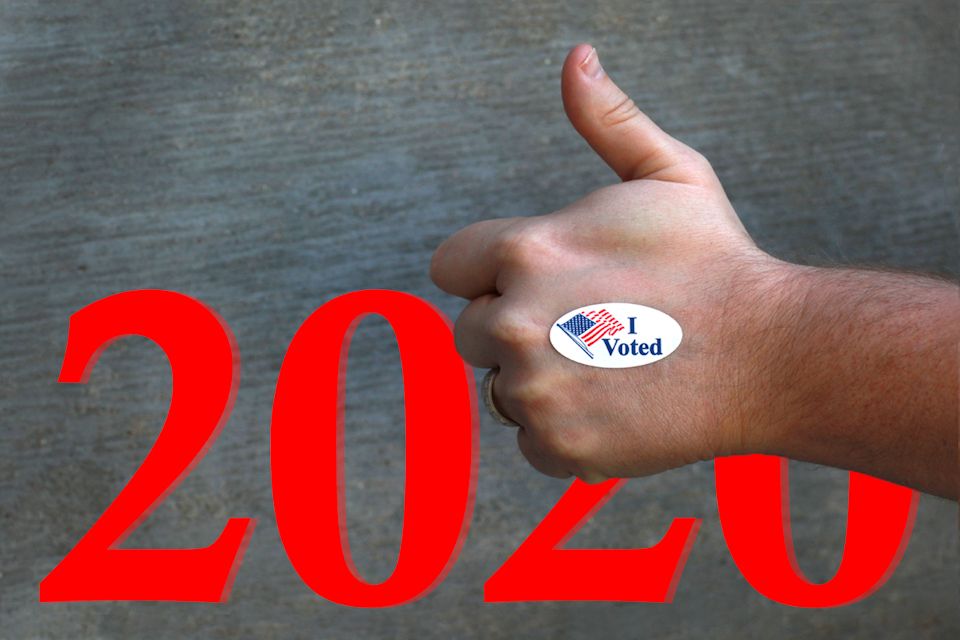 With the deadline for voter registration rapidly approaching in many states, United Methodists are helping register voters for Election Day on Nov. 3 in the U.S. ~ UM News photo/Kathleen Barry and graphic/Laurens Glass

Across the United States and the state of  Michigan, United Methodist churches are registering voters ahead of the Nov. 3 election.

The Rev. Amanda McMurtrey expects to spend 16 hours on Election Day checking in voters, issuing ballots, and ensuring people can have a say in their governance.

But in the months before Nov. 3, when she takes on an election judge’s responsibilities, the United Methodist pastor has already helped more than a dozen churches host voter-registration events.

“We live in a country that says every citizen has the right to vote and elect their leaders,” said McMurtrey, pastor of Mayo United Methodist Church in Edgewater, MD. “If every voice counts, then all persons, including churches, should help ensure that every voice is heard.”

McMurtrey’s Baltimore-Washington Conference is not alone in emphasizing voting this year. Well outside the U.S. capital, United Methodist churches and conferences help voters get registered and urging those who may not have voted in a while to double-check that they remain on the voter rolls.

United Methodist churches see a special urgency in this time of COVID-19 to ensure that U.S. adult citizens have a plan to vote that meets their state requirements and health needs. With many states’ voter registration deadlines rapidly approaching on Oct. 4 and 5, time is of the essence.

These church leaders are continuing a Methodist tradition of encouraging people to exercise their franchise that goes back to John Wesley. In 1774, Wesley advised Methodist Society members to “vote, without fee or reward, for the person they judged most worthy.”

Back in Wesley’s day, voting in Britain and its colonies was strictly a white, land-owning male affair. However, over the past two centuries, a number of people called Methodist have toiled to expand voting rights as activists in the women’s suffrage movement and the U.S. civil rights movement.

That commitment to voting is today part of official United Methodist teachings. The denomination’s Social Principles assert, “The strength of a political system depends upon the full and willing participation of its citizens.” Churches are taking this seriously.

Columbia Drive United Methodist Church in Decatur, GA, has held a campaign for voter registration even as it has encouraged people to be counted in the U.S. census. The response has been enthusiastic in the congregation of more than 450 members, said the Rev. Ralph Thompson Jr., senior pastor.

“In our congregation, we emphasize civic duty as a vital component of our Wesleyan heritage,” Thompson said. “Social holiness is a key tenet of our faith, and we live it out in practical ways. Voting is one of the primary ways that we live out our faith.”

McMurtrey said she knows many people get nervous about mixing church and state. However, she sees the commitment to voting rights as part of Christ’s broader calling.

“Empowering people to participate in the process is not, and should not be a partisan issue,” she said. “Part of loving my neighbor as myself is ensuring that their personhood is honored and valued the same as mine. That will never be possible if lack of access to voting exists.”

Make no mistake: The fight for peaceful access to the ballot box has come at great sacrifice.

On Feb. 18. 1965, some 400 people gathered in what is now Zion’s Chapel United Methodist Church in Marion, AL, to begin a march in support of a man jailed for registering Black voters. State troopers and other law enforcement attacked those leaving the church.

One of the victims that night was Jimmie Lee Jackson, a 26-year-old Baptist deacon shot twice by a state trooper while trying to protect his mother from attack. He died of his wounds eight days later. He had previously tried five times to register to vote, without success.

Jackson’s martyrdom intensified efforts for voting rights — particularly the ensuing Voting Rights March from Selma to the state capital of Montgomery, AL, and the passage of the landmark U.S. Voting Rights Act of 1965.

The Rev. Sharon Austin, a United Methodist, previously served as a pastor of Ebenezer Baptist Church in Atlanta, where she ministered with the late Rev. Martin Luther King Jr.’s family and many veterans of the Selma march. Those veterans included the late Rep. John Lewis, who suffered a fractured skull after a mob attacked marchers attempting to cross Selma’s Edmund Pettus Bridge.

Austin said her experiences joining Lewis at the 1985 Commemorative March from Selma to Montgomery and witnessing his election to Congress provided “an ageless warning” that she cannot take the right to vote for granted.

“In my two decades as a United Methodist elder, I have been privileged and encouraged to apply this learning through advocacy and action,” said Austin, the Florida Conference’s director of connectional and justice ministries. “I am grateful to the voices in the Florida Conference for their willingness to engage and speak unequivocally to the voting mandate.”

In the Florida Conference, the Bishop’s Task Force on Anti-Racism released a video Sept. 30 explaining why people should register to vote and offer tips to ensure people can exercise their rights.

The Rev. Anil Singh, a task force member and pastor of Trinity United Methodist Church in Jensen Beach, FL, said Americans could not allow a pandemic to prevent them from voting any more than times of war and strife kept previous generations from the polls.

“Honestly, we can march across bridges, and we can hold signs, we can chant slogans, we can post memes on social media,” he said. “But if we don’t show up on Election Day, we won’t have said anything at all.”

In the Greater New Jersey Conference, youth in high school and college register voters as they distribute food to those in need. Donny Reyes, a 17-year-old member of St. John United Methodist Church in Bridgeton, NJ, came up with the idea.

“Registering members of the community to vote during food distribution is a great way to ensure that our democratic system succeeds,” Reyes told Heather Mistretta of the Greater New Jersey Conference.

McMurtrey, the Maryland pastor, became an election judge for six years because she was frustrated with the political process and wanted to find some way to help.

“It is a long day (or days), but there is an inner joy in watching people participate in our own government,” she said.

“I don’t have to agree with or even like another person’s opinion to value their right, and mine, to vote.”